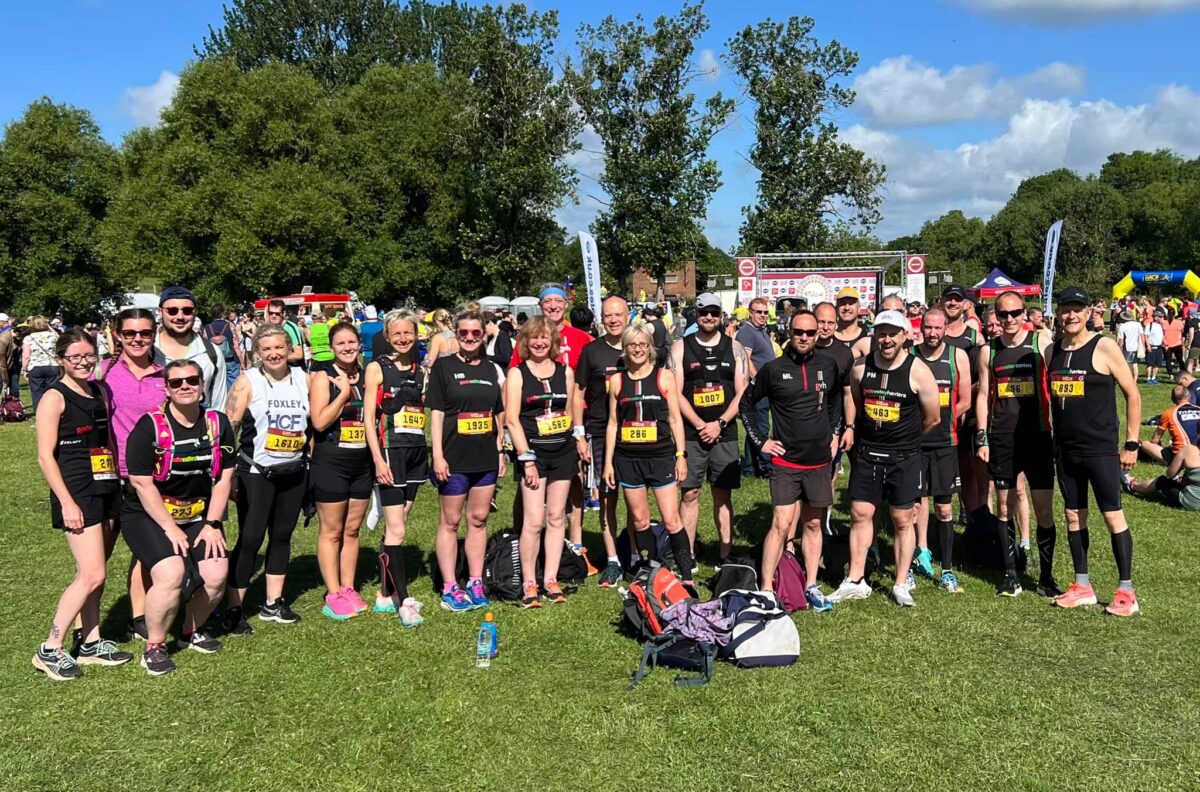 After a couple of quiet weeks for Gade Valley Harriers the return of a local and much loved event to its normal slot in the calendar, without any lingering Covid restrictions, was a great way for a large number of the club’s runners to spend their weekend.

Before the weekend Gade Valley built on its reputation as the premier destination club for ultra marathon runners by hosting its first Ultra Marathon Running Workshop. The panel discussion was hosted by head coach Ed Price with experienced ultra runners, Chris Dowling and Phil Robbins, who is a veteran of the famous African 7 day ultra Marathon des Sables, joined by recent ultra converts Sam Sparks and Nick Crowther. 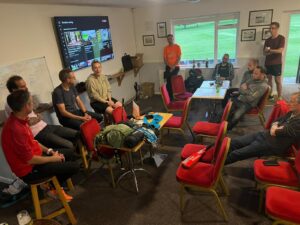 Head Coach Ed Price said afterwards, “​​We had insightful and inspiring contributions from our esteemed panel, Chris Dowling, Sam Sparks, Nicholas Crowther and Philip Robbins as well as many interesting questions from the floor. We will share some links to podcasts and other resources very soon, and if anyone would like to join the Ultra Talk WhatsApp group which lots of members are already on, please contact Chris. Anybody interested in training with like minded people for ultra marathons should contact the club through its website, www.gadevalleyharriers.co.uk. 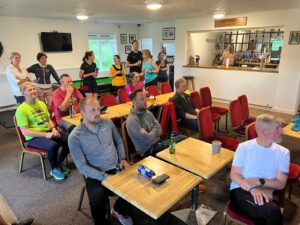 The Marston Forest 5k race took place on the evening of Friday, June 10th. According to the website of the Ampthill and Flitwick Flyers, “The Marston Forest 5k chip timed race takes place every summer, it  is popular with both experienced athletes and those runners looking to do their first official 5k race. It is a fast, flat course in the beautiful Marston Vale country park with lots of PB potential!” Tracey Cotton was the sole Harrier in action and she said after the race, “My best 5k time this year so far. Very pleased with my placing of 4th in my age category and 14th female out of 154. My chip time was 23:21.”

Saturday morning saw the usual Parkrun activity with about 20 Harriers taking on the 5k runs. There were notable performances from Anthony Fogden and Rachel Haffenden who were the first male and female Harriers to finish at Gadebridge, Matt Watt who clocked an impressive 18:08 at Cassiobury Park and Helen Cook, who led the Harriers ladies home at Cassiobury Park.

On Sunday morning, 32 Gade Valley Harriers raced the challenging, hilly route of the St Albans Half Marathon. The June heat can sometimes prove challenging in this race but competitors know that they get an ice lolly at the end which can prove a motivating factor for many. Michael Linden was the first Harrier to enjoy a lolly, completing the 13.1 miles in 1:25:44. Gareth Tucker also ran well, crossing the line in 1:28:07. Stu Gallagher, fighting his way back from recent injuries, managed a superb 1:29:08, while Andy Wells was the last of the Harriers to duck under the 90 minute mark. 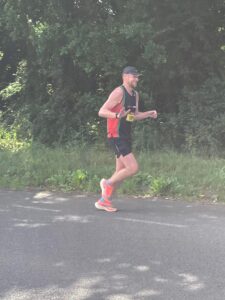 Who stole my basketball?!?

Antony Beamish completed the course in just over 90 minutes, ahead of Dave Goodman (1:32:13) competing for the Harriers for the last time before moving away from the area, he will be missed by all. Andy Cook, Sam Richards and Lewis Saville were next before Robert Bowler (1:38:03) won the latest instalment of Bowler v Allan, finishing 22 seconds ahead of Merlin Allan, though neither was threatening the club V60 record, currently held by Merlin. 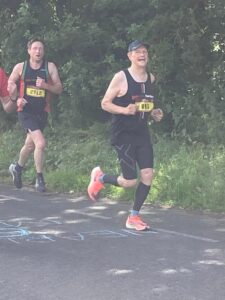 I was ahead of Wallis at one point!

Anthony Willcox, another Harrier recovering from long term injury, was next in a very respectable 1:39:17, followed by Simon Wallis, Trevor Normoyle and Tom Perry. Andy Watt was next in 1:49:37, ahead of Phil Mercer who finished 48 seconds ahead of Deon Percival, but with a slower chip time. Deon, in turn, was about a minute ahead of Andy Bishop who was running this distance for the first time in several years. 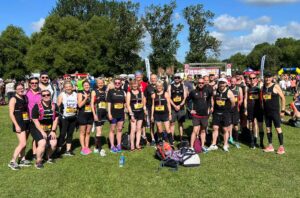 Everybody is level before the start

Michelle Wells was the first female Harrier to finish, clocking 1:52:55 and finishing just outside the top 100 women. She was closely followed by Mel Hardy, Naomi Carey and Sue Crowther. Naomi Carey banked a new Personal Best time for the Half Marathon distance, saying afterwards that it was, “…by virtue of it being my first.” As we’ve said in these pages before, that is most definitely a PB and something to be proud of. Dan Green, returning to action after a long lay off, was the last GVH athlete to finish under 2 hours, while Helen Cook and Holly Beckett crossed the finish line with almost identical chip times but Helen was a couple of minutes ahead as Holly had started further back in the field. Kelly Cox, Molly Rice, Nicki Jackson, Rich Peters, Kim Rodwell (recovering from her recent first marathon) and Ines Trent all put in strong performances in the heat. 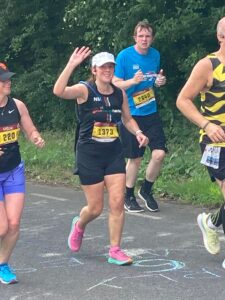 It isn’t supposed to be that much fun!

Also on Sunday morning, Vicky Crawley-Wise, Teresa Reason and Claire McDonell had planned to take on the Man v Horse race in Llanwrtyd Wells in Wales. According to the Green Events website the unique event “began in June 1980 following a chat over a pint (or three) in the back bar of the Neuadd Arms Hotel. The then Landlord, Gordon Green, overheard two men discussing the relative merits of men and horses running over mountainous terrain. The enterprising Gordon, never one to miss an opportunity to promote Llanwrtyd Wells and improve business at his hotel, decided to put it to the test. And so began the now internationally acclaimed event, Man v Horse.”

The Gade Valley trio had originally entered the 2020 edition of the famous race in 2019 but the pandemic ensured the race wasn’t held in 2020 or 2021. So after a three year wait the GVH women were looking forward, finally, to going head to head with around 600 competitors, 36 of them riding horses. The plan had been to enter the relay event but unfortunately the pandemic reared its ugly head once again as Claire tested positive for Covid leaving the team one woman down and forcing Vicky and Teresa to run the whole, approximately 23 mile, distance as individual entries. 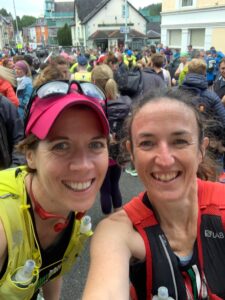 Looking forward to taking on those horses!

Vicky shared her experience after the race: “Yes I know it’s 2022 but the medal says 2020. After entering the race in 2019 and it being postponed twice we finally got to do it. Was meant to be the relay but being a woman down we decided to throw it all in & do the full whack. Thank goodness for the 50k training in my legs as I was able to get in under the 4 hour mark, before all the horses finished! If that wasn’t exciting enough, Ricky Lightfoot became only the 3rd person in 42 years to beat all the horses!” The race offers a £500 jackpot for finishing ahead of all the horses and had rolled over several times meaning that Lightfoot, from Cumbria, pocketed a £3,500 bonus. The three year wait was clearly worth it for some. 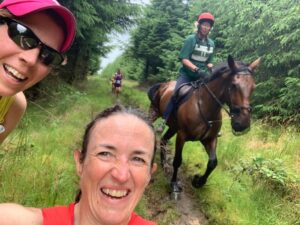 Horses, runners, but no bandits in sight!