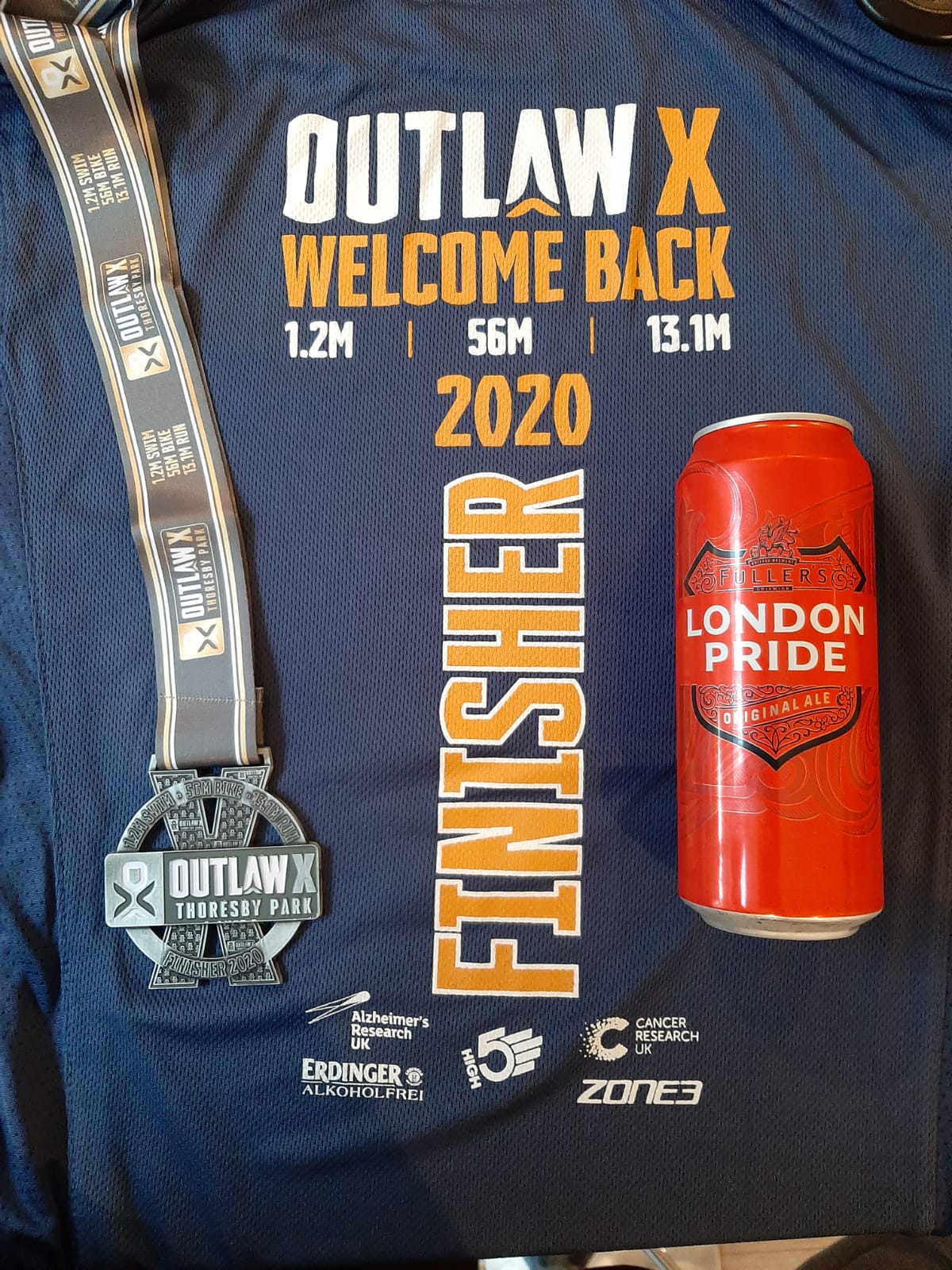 Gade Valley Harriers, in common with the rest of the world’s runners, have spent the whole summer dreaming of the time that they can return to regular racing. As with the rest of the UK, the running community was dealt a Covid related blow this weekend with the announcement that the planned return of Parkrun at the end of October is to be postponed indefinitely.
There was at least one race this weekend with Dylan Wendleken competing in the Outlaw X Half Ironman Triathlon near Nottingham on Sunday. Dylan described the course as “a chilly lake swim followed by an undulating ride and a multi terrain run.” Despite describing the day as “not my finest hour”, Dylan did himself and the club proud by completing the 1.2 mile swim, 56 mile ride and 13.1 mile run in a combined time of 5:25:45, finishing 503rd out of 1198 who completed the race.
With few races taking place and the prospect of a return to anything approaching a “normal” racing schedule as far away as ever, the Harriers had to be content with reviewing the previous season in their AGM on Thursday September 24th. Normally the AGM is one of the social events of the year when the Harriers get together to conduct the business of electing the committee, celebrate the achievements of the club’s runners and generally have a good time. This year’s meeting was conducted over Zoom which meant that none of the trophies could be handed over in person, various local off-licenses had an unexpectedly profitable evening and Domino’s drivers had to make around 50 trips instead of one trip carrying 50 pizzas.
The running year starts in October and ends in September which meant that there was barely any organised racing in the second half of the year. The members owe a massive debt of gratitude to the two head coaches, Edward Price and Gemma Felstead, for their efforts in organising Covid compliant training sessions as soon as the regulations allowed. This gratitude was reflected in Ed Price being awarded the committee award and the club members’ award for his contributions to the club.
Despite the abridged nature of the competitive season, both the men’s and women’s captains, Ross Deacon and Angeline Cottrill, “entertained” the virtual company with their “comprehensive” reviews of the year’s achievements. It also falls to the captains to nominate the male and female recipients of the club’s main awards: athlete of the year, most improved performer and best newcomer.
Teresa Reason was rewarded for her consistently excellent running by being recognised as the female athlete of the year for the second consecutive season, while Jon Roberts’ strong performances throughout the year earned him the accolade of male athlete of the year for the first time.
Kim Morgan started running only three years ago but quickly established herself as a regular scorer in the women’s cross country team. Throughout the season she steadily improved culminating in a privately run marathon “race” the week before lockdown restrictions were imposed, completing the distance in 4:07:44. She was the deserving winner of the most improved female.
Gareth Tucker is another relative newcomer to running. He was already a very good club runner but nonetheless managed to improve significantly on many of his personal best times during the year including a superb time of 1:27:08 in the Berkhamsted Half Marathon in March in what would prove to be one of the last organised races for many months. His fine performances were rewarded with the most improved male shield.
The male newcomer of the year was won by Stuart Gallagher who, due to the lockdown, is yet to run competitively for the Harriers but has impressed with some excellent performances in the various virtual events. Female newcomer was awarded to a tearfully ecstatic Sam Sparks.
The multi sports award goes to the male or female Harrier who has performed the best in all sports events, not just running, and was this year awarded to Heather Taylor. Heather achieved the notable feat of winning the club’s virtual 10k championship with the running leg of a triathlon, having already swum 750m and cycled 40k.
The club league was curtailed in March along with everything else. David Goodman was a popular winner for the men having come close in 2019 and 2018. Kim Morgan’s strong improvement was enough for her to win the women’s title. One of the most notable runners for the Harriers is Isabel Wilson who continues to finish high up the list of Harriers in many races, often beating people many years her junior. She won the Age-Graded Championship which applies a gender and age adjustment to finishing times thus allowing everybody to compete on a level playing field.
Finally, the lockdown period did not stop the Harriers competing for the annual Handicap trophy. In more normal times the Harriers race on one night per month from April to August with staggered start times depending on previous performances. This year the handicap was held throughout the summer using modern technology to record times and the club was indebted to Helen Terry who spent long hours collating the results. As ever, the handicap celebrates the achievement of the athlete who outperforms their previous performances by the biggest margin. This year’s winner was Nikki Tucker.
Although the year has been a strange one, it was great to see that the running club can still rally around and celebrate the achievements of all of its members across all levels of ability. I think everybody hopes that 2020 will be the first and last time that the annual awards will be announced via Zoom.