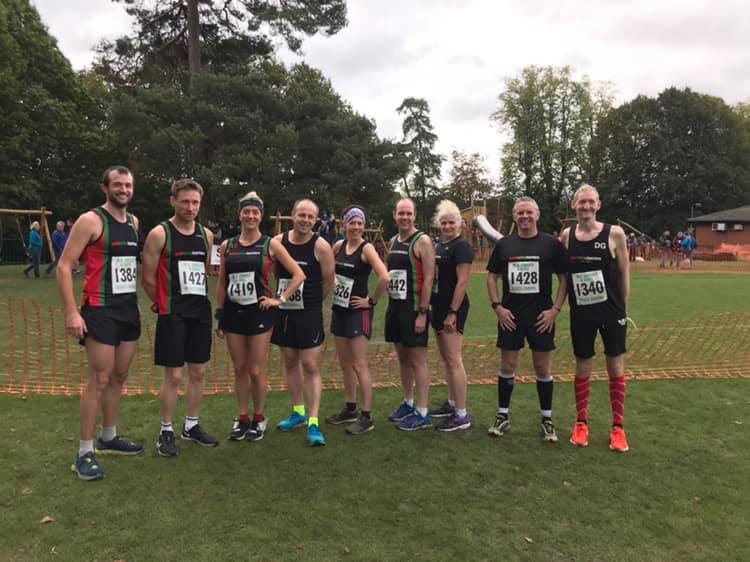 On a weekend that Great Britain’s professional athletes won silver in both the male and female 100 metre relay races at the World Championship in the hot and humid climate of Qatar, Gade Valley Harriers took to the streets of Abbots Langley in pursuit of silverware of their own, in somewhat cooler conditions.

Four of the first finishers at the Abbots Langley Tough Ten were club athletes – who combined to take the team prize – and the Harriers also picked up three first place category awards.

After running around the grounds of the Hertfordshire village’s cricket club the route took competitors into the village of Bedmond before runners were able to enjoy a long downhill section into Kings Langley.

Hamish Shaw led the team as they turned back up the hill towards the cricket club, and crossed the line in third place, and as first senior male in a quick time of 38:43. Less than thirty seconds later, Dylan Wendleken completed the 10km course just two places further back in 39:18 as he picked up the male vet 40+ (MV40) award.

Dave Goodman (40:06) managed to sprint past team-mate Simon Wallis (40:08) as they approached the finish line, and the duo finished in ninth and tenth place, respectively, to help the club pick up the team prize.

Phil Mercer (41:58) held off Steve Newing (42:23), who beat his time from the previous year by one second! James Felstead was the last Harrier male to complete the course, despite recording an impressive time of 43:28.

Victoria Crawley-Wise was the first female from the club to finish the race and fifth overall lady, and collected the FV35 award. She took over seven minutes off her 2018 time, crossing the line in 47:20. Claire McDonnell (48:09) completed her first race since a long injury lay-off and Angeline Cottrill (50:52) picked up a 10k personal best (PB) by taking around thirty seconds off her time from the same event last year.

Meanwhile, a trio of Harriers upped the distance by participating in marathons, including Julian Smith and Trevor Normoyle who were competing in the police marathon championship at the Chester Marathon. After starting at the North West England’s city’s racecourse the runners were treated to views of some of the historic city’s iconic landmarks, such as the Roman Walls and Cathedral, before heading out to the stunning Cheshire countryside. Seven of the 26.2 miles took place across the border in Wales, and then participants returned to the racecourse along the banks of the River Dee. Smith led the pair of law enforcements officers from the club by picking up a three-minute PB of 2:51:21, while Normoyle picked up a pain in his toe during the last few miles, but still recorded a credible time of 3:40:29.

Michael Linden collected a PB at the Jersey Marathon, taking 16-minutes off his previous best. His race started in the Channel Island’s capital city of St Hellier before heading into local countryside. The last few miles sent runners along the island’s south coast and Linden completed the hilly course in 3:17:40.

On Saturday, Rob Humphreys upped the distance further still, by taking part in the Exmoor Coast 50km ultra-marathon which started at Combe Martin on the western edge of the Exmoor National Park and went along the trails of the South West Coastal Path to Minehead on the eastern side. After nearly 7,000 feet of elevation, he completed the arduous course in just under seven hours and forty minutes.

Finally, Tracey Cotton continued her fine recent form by being the first female to complete Gadebridge ParkRun’s 5km course, with a time of 23:28. 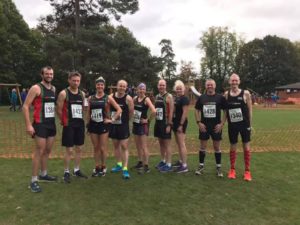 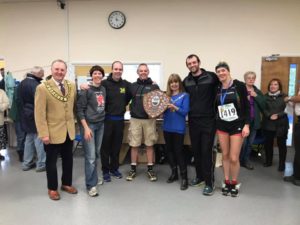 Collecting the winning team’s trophy at the Abotts Tough Ten 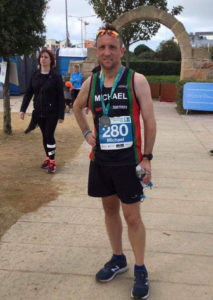 Linden at the Jersey Marathon