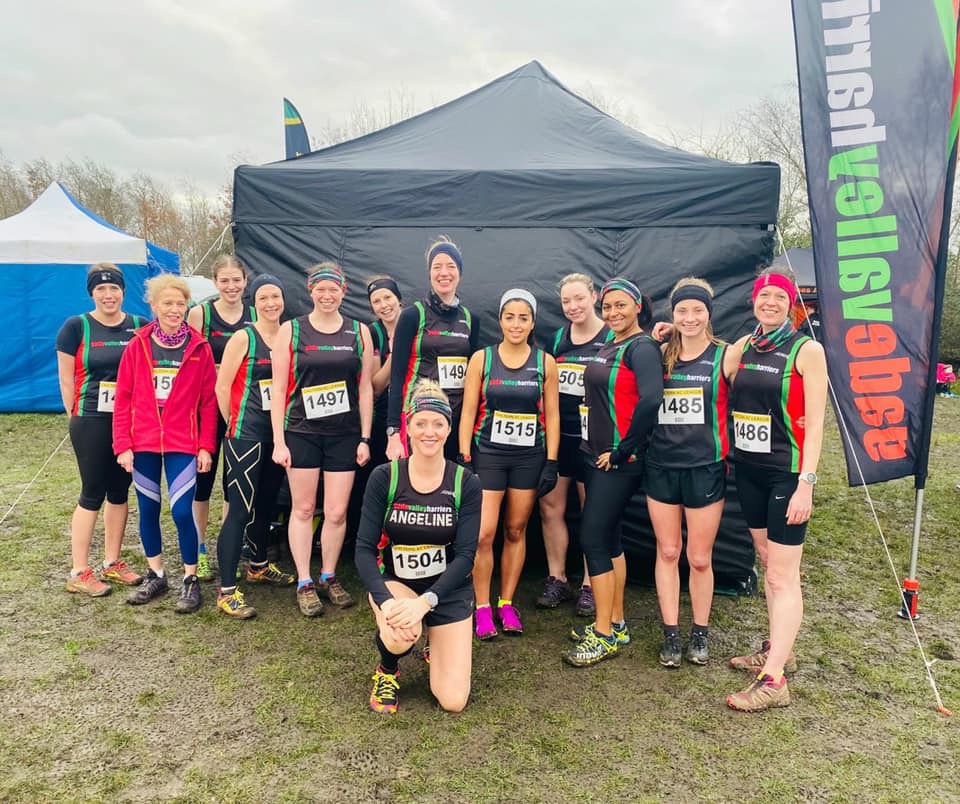 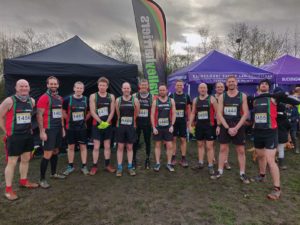 Saturday marked the return of the Chiltern Cross Country League for the penultimate meet of the season. Gade Valley Harriers arrived at the Keysoe Equestrian Centre in Bedfordshire knowing that they needed to score as many points as possible to improve their position in the league in an attempt to avoid relegation from Division One. Both the male and female courses were longer in this event than the other races, but they were also the flattest on the circuit with just a slight incline and a few earth mounds on each lap.

Unfortunately, due to injuries to some of the male club members, and some of the female team suffering from mechanical trouble enroute meaning they couldn’t continue their journey, the club had a lower than usual turnout for a fixture that included running through knee deep water which felt like it was nearly frozen.

As usual the ladies’ race kicked off the senior events, and as has been the case at each fixture so far this term, they had more competitors than the men – before this season that had only ever happened for a small handful of cross country races.

On a cold and windy afternoon on a course which had been made muddy by the junior races earlier in the day, Olivia Howe made her league debut for the club, and she led her team-mates throughout the 6k race, with Kathleen Smith hot on her heels throughout. Smith passed a rival from Milton Keynes based Redway Runners – a team that is only two places above the Harriers in the league table – on the line with a sprint finish which also saw her close the gap on her club mate, but Howe held onto her lead by the finest of margins as the pair clocked times of 27:27 and 27:30 respectively, and they both managed to finish in the top fifty by crossing the line in 47th and 48th places respectively.

Nicoletta Charalambous (29:45) was also making her bow in the competition as she and Kim Morgan (29:52) spent much of the race in close proximity of each other. The pair sneaked over the line in under half an hour, but just missed out on finishing in the top 100, crossing the line in 101st and 102nd place respectively.

Natasha Gibbs (31:10) also passed a couple of rivals as they approached the finish funnel, and Megan McCredie (32:26) led a trio of club mates who all finished within forty seconds and nine places of each other, ahead of Laura Johnson (32:54) and Isabel Wilson (33:01) who was the first female vet over 65 to complete the course.

Jaqui Sampson (34:00) made her first appearance of the season, and she crossed the line just five positions ahead of Angeline Cottrill (34:34). Leona Flaherty (37:40) was another member making her season debut, and she finished ahead of Mary McCluskey (38:44) and Helen Heathcote (40:08).

Once the ladies were safely across the line, the men’s race started, and like for the ladies it was a league debutant who led the team throughout. Andy Symonds embraced the strengthening head-wind and now even thicker mud to complete the 10.2k race in 42:41, and sneaked into the top 100 by crossing the line in 95th place.

Michael Linden (44:08) held off Antony Beamish (44:15) by seven seconds and six positions, while James Birnie completed the three-lap course in 45:23.

Nick Crowther (47:31) passed Phil Heaton (47:40) in the final stages and the pair finished in consecutive places.

Overall on the day, despite their lack of numbers, the Harriers picked up enough points to come eleventh, but that wasn’t enough to move the club out of the dreaded drop zone, as the Harriers remain thirteenth in the 14 club league.

Away from cross country, Dave Goodman was competing in an unusual race event which saw him race nearly fifty miles over four days, in the Dopey Challenge at Disneyland in Orlando, USA