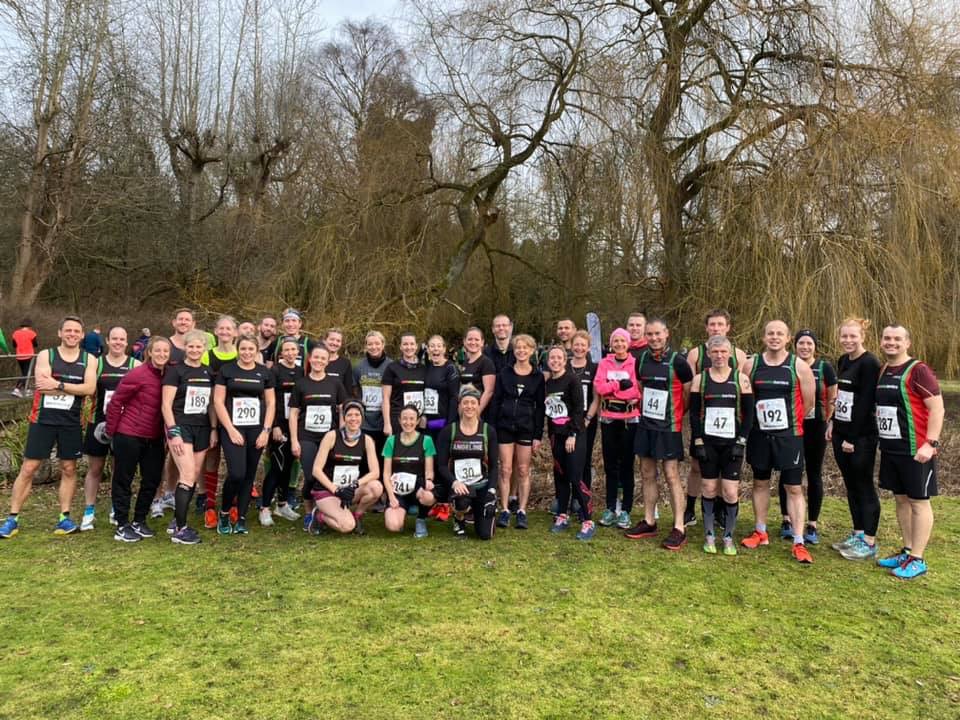 No sooner than Christmas is over and members of Gade Valley Harriers return to racing as they look forward to starting their training for their various challenges in the new year and beyond, and it started on Sunday for a large number of members as they took part in the Pednor 10 – a challenging ten mile road race along the country lanes around Chesham.
On an unseasonably mild and dry morning, Michael Linden who started the race towards the centre of the field, used his pace and experience to pass several club mates and other rival runners, to finish as first Harrier, and in ninth place overall and third Male Vet 40+ (MV40), while setting a new personal best (PB) of 1:04:55.
The race is a two-lap course, which means there is also an option of completing the race as a relay, with each runner completing a five-mile lap each. Lisa Newing and Jon Roberts took up this option – as Team Newbutts – and Roberts was the second member from the club to cross the finish line, after the duo recorded a combined time of 1:05:25, and they were the second mixed-team.
Each lap starts with a steady climb for about two miles before a steeper hill allows for a fast downhill finish and Anthony Beamish used those last few miles to his advantage and finish as second Harrier to complete the course solo, recording a time of 1:07:03, ahead of Stephen Newing (1:08:42), Nicholas Crowther (1:08:57) and Vince Ellerby (1:09:35) who all broke the 70-minute barrier.
Hamish and Sian Shaw also ran the event as a relay team – known simply as The Shaws – and they were the third mixed-team to complete the course, with a time of 1:09:44.
Simon Wallis (1:10:35) just missed out on a sub-70, and Gareth Tucker (1:11:39) passed Guy Woollett (1:11:50) in the closing stages as the pair finished in consecutive places. Dave Goodman (1:12:22) held off Philip Mercer (1:12:50) by less than half a minute.
Teresa Reason had only completed a marathon last weekend, but she was the first lady from the club to cross the line, and fifth overall and first FV40, with a time of 1:15:00. Trevor Normoyle (1:16:25) finished ahead of Chris Dowling (1:17:38).
Kim Morgan (1:18:14) was the tenth female to cross the line and she picked up her second PB of the weekend after completing the 5k Cassiobury Park ParkRun event the previous day in 22:15.
Claire McDonnell (1:20:17) was second FV50, crossing the line just three places and thirty seconds ahead of Victoria Crawley Wise (1:20:48).
Tracey Cotton (1:23:01) and Samantha Raffety (1:23:14) finished in succession, as did Megan McCreadie (1:25:26) and Andy Terry (1:25:28) who were separated by the finest of margains.
Isabel Wilson (1:26:44) was third in the FV60 category, while Neil Harper (1:28:05) and Beverley Loczy (1:28:45) both finished inside 90 minutes, ahead of Helen Cook (1:30:28).
Helen Terry and Karis Thomas (both 1:39:10) ran the race together, as did Sam Sparks, Laura Johnson, Angeline Cottrill and Kirstie Hardiman (all 1:41:16), and Holly Beckett and Gemma Tucker (both 1:46:35).
A handful of other Harriers also picked up PBs at ParkRuns on Saturday – Kathleen Smith (20:50) at Colchester, Tracy Scollin (29:17) at St Albans, and Ines Trent (42:44) at Cassiobury Park. 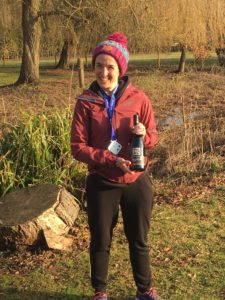 Teresa Reason with her FV40 award