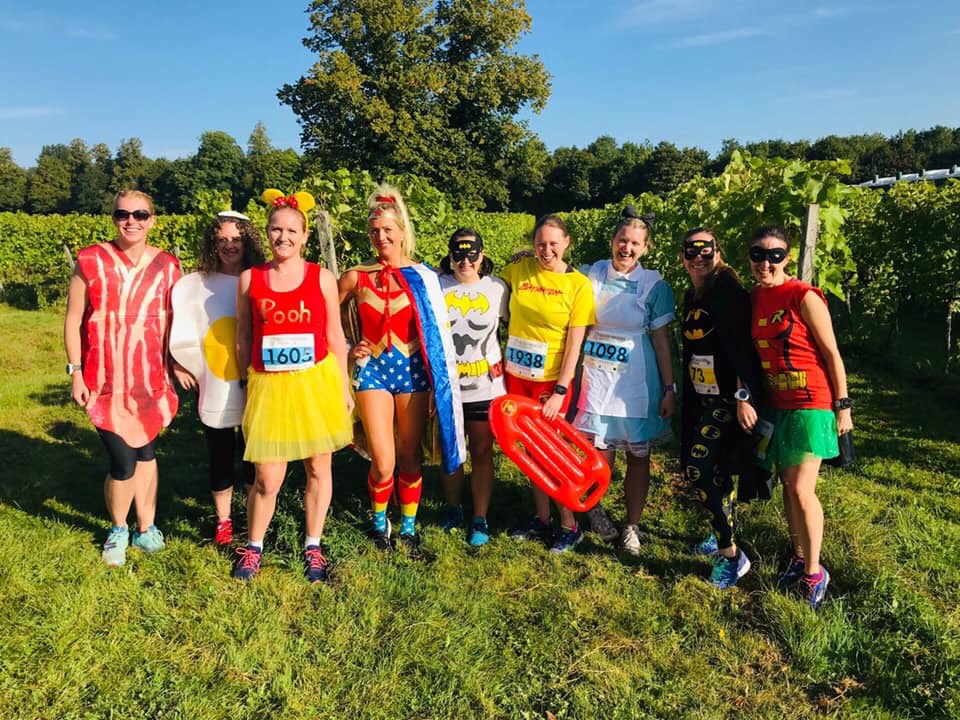 A wine tasting tour doesn’t usually involve breaking into a sweat, but when you have to run a couple of miles between each drinks station, in fancy dress, it becomes a whole different experience as nine ladies from Gade Valley Harriers discovered on Sunday when they travelled to England’s largest vineyard in search of one of the year’s more fun race events – the Surrey Bacchus Marathon, Half Marathon and 10k.
Starting in the heart of the North Downs on the Denbies vineyard, participants were given the chance to sample up to six different wines while being accompanied by bands playing rousing music at various intervals on a hilly, off road course around stunning Surrey countryside with the backdrop of breath-taking views of the Mole Valley and Ranmore Common.
Seasoned marathoners Susie Ivin and Teresa Reason didn’t bottle doing the full 26.2-mile distance event and, dressed as Batgirl and Robin, crossed the finish line together in 5:14:38.
Kirstie Hardiman aka Winnie the Pooh, along with nurse Holly Beckett, Mary McCluskey who was in full a full Baywatch outfit and Wonderwoman Angeline Cottrill decided to wine-d it down slightly by taking part in the half marathon, and finished in 3:32:00.
Helen Terry and Joanna Kidd thought breakfast was best before wine, so paired up as a bacon and egg duo, completing the 10k course in a time of 1:19:08, ahead of Claire Pellett who also dressed up with a batgirl theme and crossed the line in 1:29:25.

Several Harriers completed races earlier in the week, with a couple even managing multiple events. Dave Goodman participated in the latest installment of the Chase the Sun 10k series – this time at Clapham Common in South London – on Wednesday evening, crossing the line in around 42:19 He went on to pick up a personal best (PB) at the Run Through Victoria Park half marathon in East London on Saturday with a time of 1:27:14 and then wrapped up his weekend with Rough Runner – a gladiator style assault course – on Sunday.

Phil Mercer competed in the monthly Ealing Mile in West London on Friday for the second successive month, and beat his previous time to pick up a PB of 5:45, and then on Saturday ran his first ever 15k race at the Conquer Crystal Palace event in South London, crossing the line in 1:11:19.

Also, on Wednesday, Em Coady and Katie Hogendoorn were taking part in the Silverstone 10k. Coady completed the two-lap course around the Northants motor racing circuit which hosts the British Formula 1 Grand Prix, in 59:58, while Hogendoorn picked up a PB with a time of 61:22.

On Saturday, Peter Tucker completed his 100th ParkRun – a weekly, timed 5k event which takes place in parks all around the country. He finished the undulating, multi-terrain course in 31:45. At the Cassiobury Park event in Watford, Kim Morgan picked up a PB with a time of 24:02. 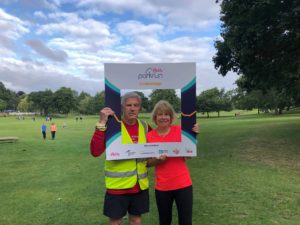