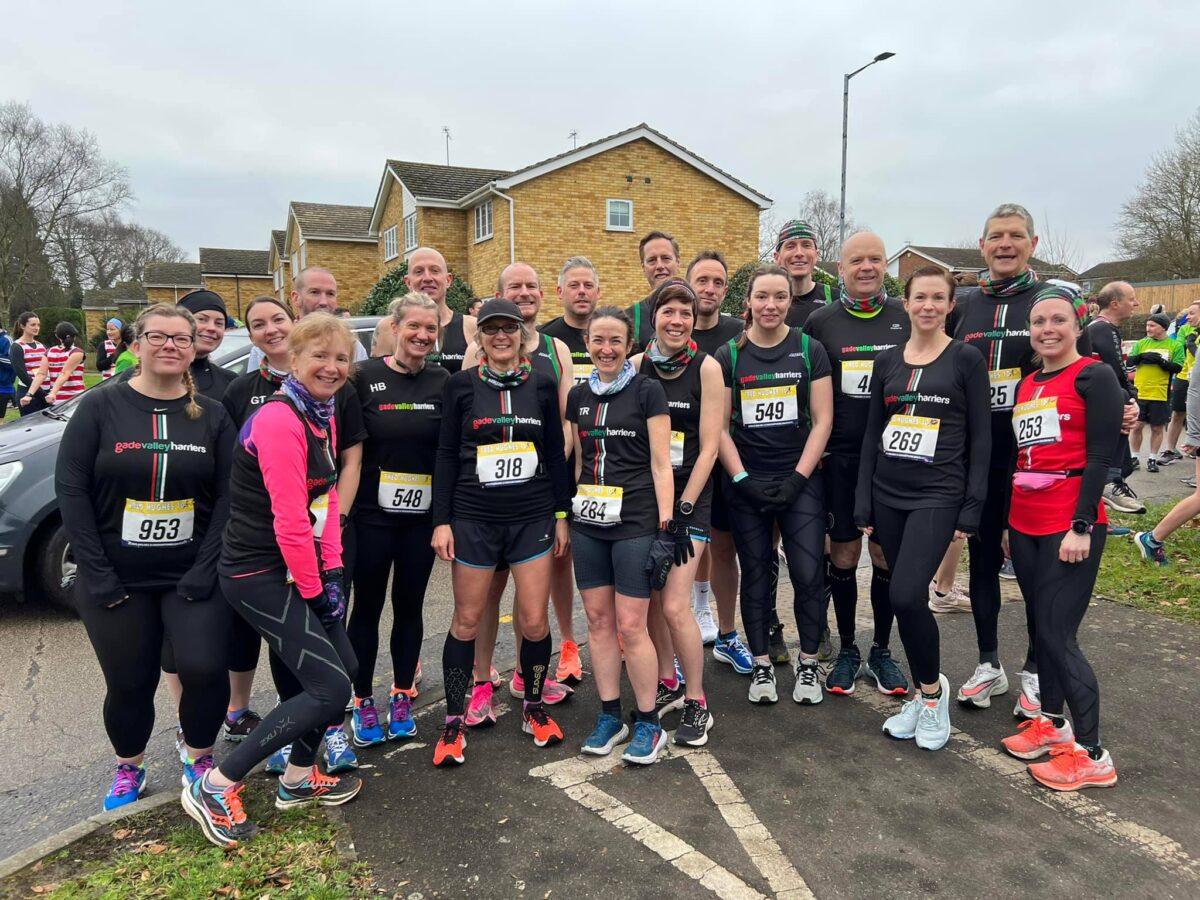 Watt Happened at the Fred Hughes 10…?

Sunday 24th January saw a huge contingent of Gade Valley Harriers in St Albans for the Fred Huges 10. Fred Hughes is a popular local race, 10 miles through the countryside between St Albans and Hemel Hempstead. Starting in King Harry Street alongside Verulam Park the race proceeds to the hamlet of Potters Crouch before a loop around Chiswell Green on the outskirts of St Albans and a second loop towards Bedmond, near Hemel Hempstead. The Gade Valley runners were part of a group of 824 runners who completed the 10 mile course.

Before the Fred Hughes race, on Saturday, there was a much reduced contingent of GVH runners taking on some of the local Parkruns, as many kept their powder dry for Fred Hughes. One of those was Michael Linden who travelled to St Albans on Saturday morning to pick up his race number for Fred Hughes and decided to take on St Albans Parkrun in Verulam Park “because I was there”. Despite deciding to “just jog” the 5k, he said he “gets frustrated when I run too slow” and ended up running the second lap much more quickly and “found myself picking a load of runners off”. He worked his way through the field to finish 4th overall in 19:48 leaving him wondering if “that might not have been a good idea with a 10 mile race tomorrow…” 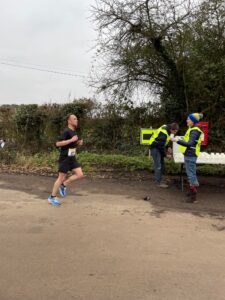 As the runners gathered early on Sunday morning at St Columba’s College, half a mile down King Harry Street from the start of the Fred Hughes, it was noted that Covid protocols were still in force at the race HQ. A one way system in and out of the sports hall for collecting race numbers ensured that nobody congregated indoors and risked spreading Covid, but instead congregated in large groups, huddling against the cold, in the school car park risking spreading Covid. 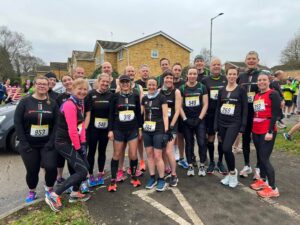 You can’t see Stu’s hand, but I know why I was smiling

The first 400 metres or so of the race goes along a narrow path, with slippery grass on either side, towards Hempstead Road. The traffic isn’t stopped on the main road so runners are restricted to a narrow coned off section until they turn into Potterscrouch Lane where the course finally opens up. As a result of the narrow start, the opening can be frustratingly slow for some who are unlucky enough to get caught behind optimists and delusionals.

After the first loop around Chiswell Green the course passes Potters Crouch again before the brutally steep climb up towards Bedmond. For some, the climb up to Bedmond, about 7 miles into the race, was the point at which recent lack of training caught up with them. James Birnie said “I haven’t trained much since I was ill at Christmas, Bedmond definitely found me out, I went backwards after that”.

The final 2 miles of the course is relatively flat and Stu Gallagher, another Harrier recovering from illness and injury, managed to find a boost as he saw his team mate, James, coming back closer to him. The boost of having a teammate in your sights works both ways though, as James spotted Stu just before the finishing straight and managed to stay a few seconds ahead. James completed the course in 1:06:45 to finish 93rd and Stu crossed the line just 2 places and 6 seconds later. 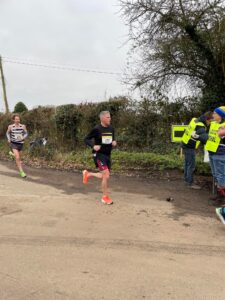 Much earlier than that, Matt Watt continued his superb recent form, and his unprecedented injury free stretch, to run under an hour for 10 miles for the first time. His time was 59:19 which was good enough for him to finish 26th overall and first for GVH. Michael Linden (not apparently suffering too much for his Parkrun the day before), Gareth Tucker and Andy Wells all scored new PBs, finishing in 1:00:58, 1:03:11 and 1:04:31, respectively. Heather Timmis was competing in her first ever 10 mile road race so a PB was guaranteed. She ran superbly to finish next for GVH in 1:05:21, 9th overall female and 2nd in her age category. 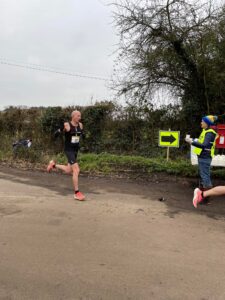 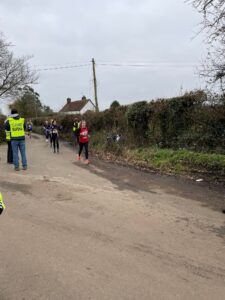 Andrew Watt and Vicky Crawley-Wise ran together for the 10 miles with Andrew somehow recording a chip time 2 seconds ahead of Vicky despite them sticking together all the way. Claire McDonnell finished just ahead of Sue Crowther and Roly Kendall. Sue was running her first 10 mile race, so recorded a PB of 1:23:11 which was good enough to be 6th in her age category with a superb age grading of 71.09. 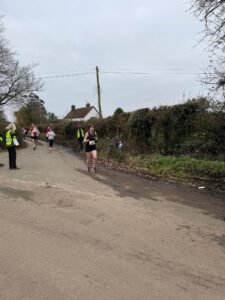 Oh, maybe they didn’t run together…

Laura Johnson was next for GVH, and next to lower her personal mark. She completed the course in 1:25:20. She was followed home by Helen Cook, Tracey Cotton and Ashleigh Taylor, all of whom managed to finish in under an hour and a half. Anthony Fogden was running his first 10 mile race so his time of 1:31:47 was a PB. Gemma Tucker and Holly Becket ran the course together, finishing in 1:39:30, which is a new PB for Gemma. 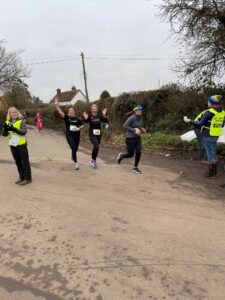 Gemma and Holly definitely did. 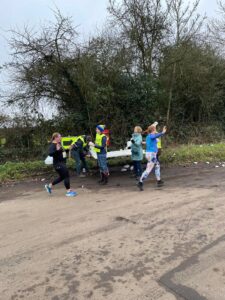 Ines was surprised by the water stop and had to slam on the anchors.

An added bonus came along on Sunday evening when it became known that the Gade Valley men’s team, consisting of Matt Watt, Michael Linden, Gareth Tucker and Andy Wells, had picked up the bronze medal in the Herts County 10 mile V40 championships. As is normally the case, nobody had remembered that they had ticked a box to say that they were eligible for the Herts V40 championships, so nobody had bothered to wait around for the results. The medals were picked up by Kate Rennie from Dacorum and Tring AC and returned to the club on Monday. 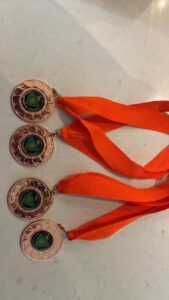 Unexpected bling. Ange took delivery, it hasn’t been seen since.

In other running news there was an exciting moment on Saturday morning at Cassiobury Parkrun as Andy Cook and Antony Beamish sighted the lesser spotted Simeon Beckford-Tongs. It is believed to have been the first sighting of the GVH / Watford Harriers legend outside of Chiltern League Cross Country races. SJBT started swiftly and was up with the leaders for a time before being quickly overhauled by Antony and eventually overhauled by Andy. Beamish finished the 5k in 24th place in a time of 20:42, Andy Cook was 30th in 21:19 while SJBT finished 43rd in 22:10. Andy said “…[SJBT] held 3rd place for about 400m then Beamo caught him after 1 mile so I suspect he still feels he’s a 19 minute runner.” This being a reference to BT’s PB at Cassiobury Parkrun, a highly respectable 18:53. 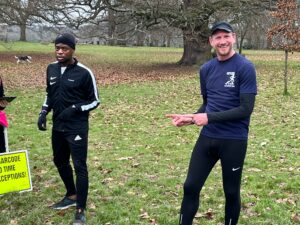 Great work. SJBT obviously had no idea what was going on.