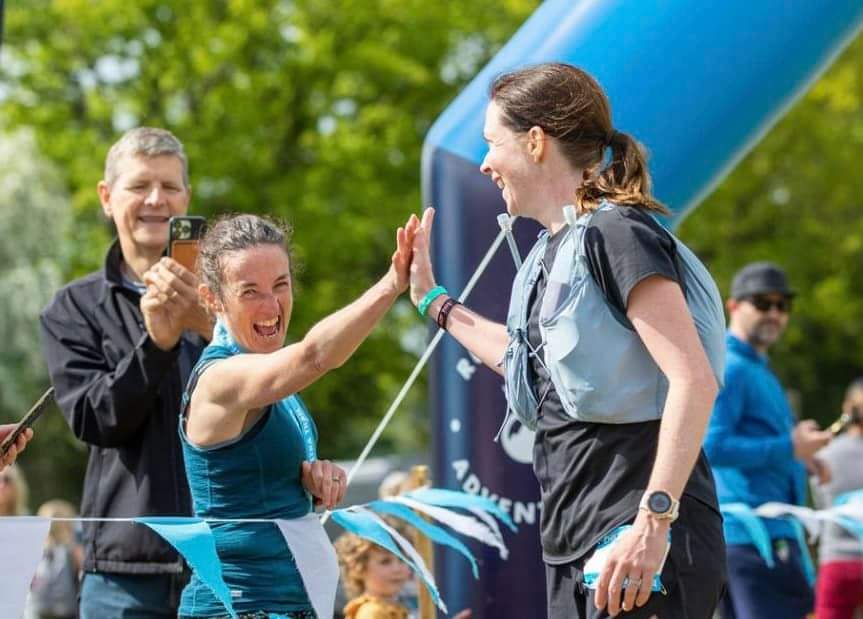 The running weekend got underway ultra-early last week as the Pednor 5, which had taken place on Bank Holiday Monday, May 2nd came too late to make it into last weekend’s report. The Pednor 5 is a picturesque single lap race on the country roads between Chesham and Chartridge, starting and finishing on Pednor Road near Chesham Tennis Club.

11 Harriers stayed sober enough on the bank holiday Monday to toe the start line at 7:00PM. 5 mile races are relatively rare so as usual there was a high proportion of new PBs. Matt Ashby again led the way as he continued to beat his existing PBs seemingly in every race. He finished 5th overall in a superb new PB of 28:06. Matt’s partner, Jenny Stubberfield, also scored a PB, finishing 97th overall, 23rd female in a new best time of 39:19. Matt, perhaps slightly unflatteringly, said afterwards, “PBs for me and Jenny (hers by virtue of it being her first 5-miler!)”.

Jon Roberts has recently turned 50 and given his superb fitness and form over the past few years, it might not be too surprising if he breaks some or all of the club’s existing V50 records. He duly started this task by running under 30 minutes for 5 miles, taking over 2 minutes from Guy Woollet’s existing club V50 record to finish the race in 29:57. 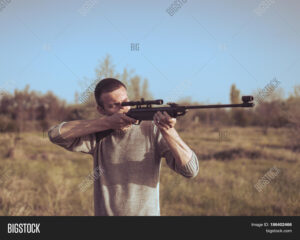 Jon takes a look at the club V50 records

Anthony Willcox continued his return to fitness with a solid time of 32:17, while Rachel Haffenden continued to show excellent form, setting a new personal mark of 40:59. Roland Kendal and Tracey Cotton finished just behind Rachel, with Isabel Wilson just behind them. Isabel also recorded a new PB, 42:08 and finished first in her W65 age category, although, rather curiously, there were no prizes awarded beyond W55, as Isabel explained “[I finished] first of 3 age 65 and older ladies. But apparently lady runners fall off the perch at 65 as there is no 65-75 female category.” 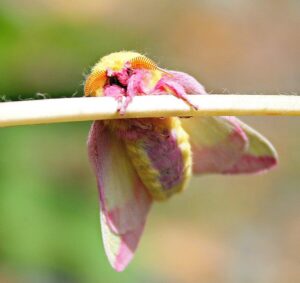 Some kind of animal falling off a perch

Helen Terry and Karis Thomas ran together, completing the race in 46:43 and 46:45, respectively, the latter recording a new PB in the process. Although, as she explained a week later, that PB didn’t last for long, “Mine was a PB until I beat it yesterday with 43:58 at Marlow.” Not only did she beat it, but she smashed it, taking nearly 3 minutes off her short-lived PB. Martin Storrie was the other GVH runner taking part at Pednor, finishing just behind Helen and Karis. 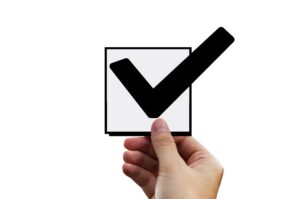 The weekend of 7th and 8th May was all about ultra running. Gade Valley Harriers enhanced its reputation as the goto local club for ultra-marathon running as no fewer than 7 Harriers took part in 3 different ultra-marathon races. Jono Marval took on the Thames Path 100 mile race while Dave Goodman took on the Rat Race Dirty Weekend Dirty Double, a 40 mile, 2 lap off road race with over 40 obstacles thrown in for good measure. Also on Saturday 5 GVH athletes ran the 50k Chiltern Ridge Ultra Trail race.

Dave Goodman is a regular marathon runner, completing on average around 15 marathons per year since he has been a member of GVH. He also likes to take part in ultra marathon events (any race with a distance longer than the standard marathon distance) and he particularly likes “unusual” events.

The Rat Race Dirty Weekend has been held at Burghley House for 8 years and combines obstacle courses of varying distances with a weekend long festival. This year the headline act at the festival was the Darkness and sadly the lights went out on the event as it was announced that 2022 will be the last staging. Dave chose to enter the “Double Mucker” event, the longest on offer, taking in 40 miles of off-road trail running with over 400 obstacles.

Dave described it as a “crazy weekend”, going on to say, “Final Rat race done. 40 miles over 400 obstacles, completed in just under 8hrs. I was 3rd overall in the double. A great atmosphere and a great after party. Such a shame it’s the last one”. Actually, this doesn’t quite tell the full story. Dave completed the first 20 mile lap in just under 4 and a half hours, placing him around 25th place at the halfway stage. In the second half of the race Dave’s superior endurance, gained by a training regime targetted to ultra running, saw him pick up the pace to pick off other athletes one by one to finally finish 3rd, only a minute behind the silver medal position. An truly exceptional second lap. 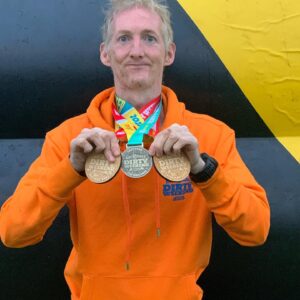 How to make Ange insanely jealous

Running a slightly more conventional, but no less intimidating, ultra marathon was Jono Marval, as he took on the Thames Path 100 mile race. According to the official website, “The 100 mile course is a marked point to point race which takes runners from Richmond in South West London to the centre of Oxford. The course follows the meandering route of the Thames against it’s flow and is flat and fast with the majority on groomed paths and paved pathway.”

Jono completed the 100 miles in 21:28:01 in 42nd overall position out of 203 finishers. However this hardly tells the full story of his race. There are 12 timed checkpoints between the Richmond and Oxford and the full results show the position of each racer at each point. After the second checkpoint, three and half hours into his race, Jono was in 80th position. He steadily picked up positions at each checkpoint to get to 42nd by the end. He added as a very modest afterthought, “It was a 1hr 40mins PB also. It just means I didn’t have Chris Dowling getting me lost this time! Also, the Thames path is pretty flat…”

While Dave and Jono competed in isolation, a small group of GVH runners had helped each other in their preparations for the 50k Chiltern Ridge Ultra Trail race. Originally 6 Harriers were due to take on the picturesque course but unfortunately Claire McDonnel was unable to compete due to injury so she spent her day cheering on her club mates at various points on the course. 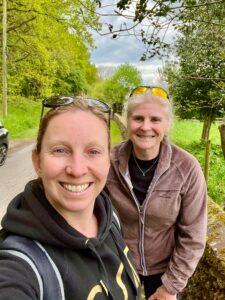 The real performance of the day

The support of the GVH membership did not go unnoticed by the competitors. Kim Morgan, running her first ultra marathon said, “Huge thank you to all the supporters from our wonderful GVH family. It was amazing to see so many people out on the course and at the finish!” Kim was extremely pleased with her finish time of 6:11:51, placing her 27th overall female. 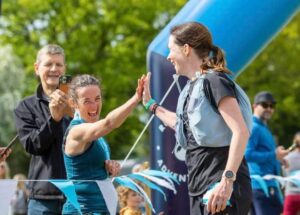 “who’s the dodgy bloke in the background? No, the one in the sunglasses…”

Also running her first ultra marathon was Vicky Crawley Wise, she too commented on the support from the club saying, “Thank you so much for coming out to support us today.” She recorded a time of 5:47:58, finishing 17th overall female. Just 3 places and 3 minutes behind Vicky was Phil Mercer. He was “just pleased to complete the race” as he has been struggling with injury for most of 2022. 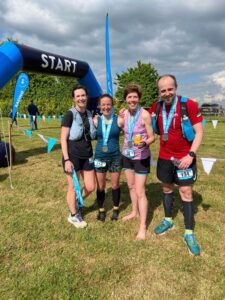 Chris Dowling is a seasoned, and extremely strong, ultra runner. As indicated by Jono, Chris wasn’t available to offer Jono bad navigation advice as he was competing in the Chiltern Ridge Ultra. Chris showed his undoubted class to finish the hilly 50k in 4:37:47, in 8th overall position and only 10 minutes, a very short time in ultra marathon terms, behind the 3rd place finisher. Chris was also grateful to the GVH support, saying, “Thanks for all the support. Huge boost to see the GVH cheer squad on the course.” 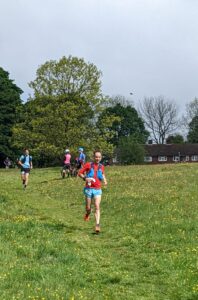 Too fast to be in the finish photo

The undoubted performance of the weekend was delivered by Teresa Reason in the Chiltern Ultra. She has been in consistent form for over a year since qualifying for the London Marathon Championship race in April 2021. She continued her excellent long distance form in the Chiltern Ultra by completing the 50k in 5:03:00. She was 24th overall, 2nd overall female and won the V40 age category, capping off a superb set of ultra marathon results for GVH to continue the trend of outstanding performance in ultra races in general. 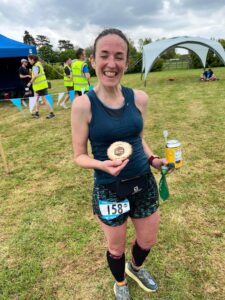 Elsewhere last weekend, 12 GVH runners took a break from their usual Parkrun events to continue the club’s parkrun tour, organised by head coach Ed Price. The latest stop on the tour was Wardown Park in Luton, a surprisingly pleasant spot only a stone’s throw from Luton town centre. Michael Linden was the only Harrier to duck under the 20 minute mark on the tricky course, recording 19:46 to finish 5th overall, just ahead of Anthony Willcox in 7th. 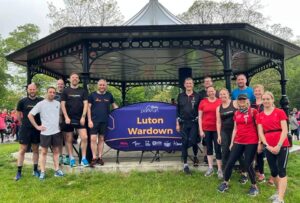 Are we really in Luton?

Vince Ellerby finished just ahead of Ed Price, who in turn was a second ahead of Antony Beamish (who had run 10 miles from Redbourn with Andy Cook and Steve Newing to get to Wardown Park). Sue Crowther was the first GVH female finisher, ahead of Susie Ivin, Helen Cook, Mary McCluskey and Ines Trent.

Many people have a favourite parkrun and Vince Ellerby is a definite fan of Black Park Parkrun, having completed over 400 runs at that venue. Vince was slightly less than impressed with the lack of a cafe at Wardown Park (it having not reopened since the pandemic), he said at 10:05 on Saturday morning, “Wardown parkrun, parkrun with no coffee, this won’t do, this needs to be checked next time.” A contrite Ed responded with “I’ve already checked. Aldenham definitely has a functioning cafe!” So we are all, particularly Vince, looking forward to the next Parkrun tour installment. 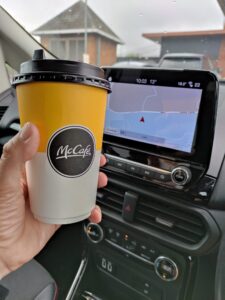 When the satnav takes Vince to the wrong coffee shop