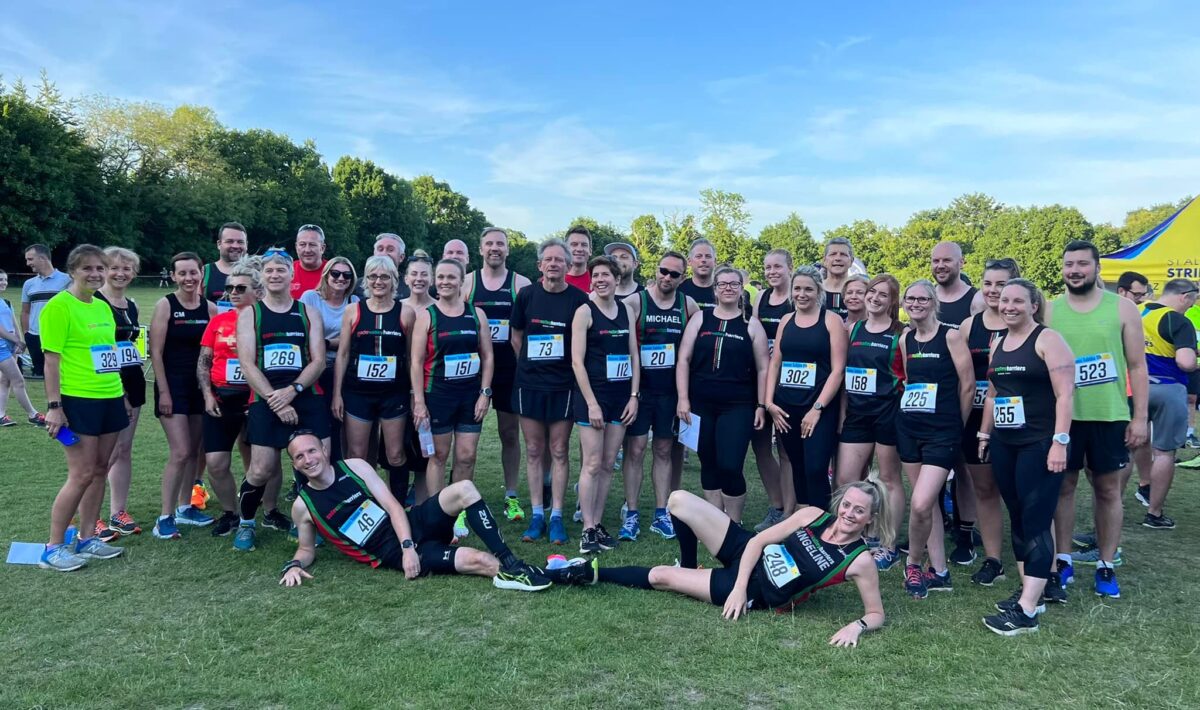 The week to 26th June was something of a back to front affair for Gade Valley Harriers as it started on Tuesday June 21st with 40 Harriers taking part in the annual Summer Solstice 10k race in St Albans and finished with a similar number of Harriers getting drunk at the annual summer party on Saturday evening. Needless to say there was little in the way of competitive racing on Sunday.

The Summer Solstice run is a fast 10k race that starts and finishes in Highfield Park in St Albans before heading out towards Hatfield on the Alban Way, an old railway repurposed as a walking and cycling path (and hence very flat), a quick loop around a housing estate before returning on the Alban Way to Highfield Park. The race starts at 8:00PM on the evening of the summer solstice so can either provide some very fast times, if the weather is benign, or some slightly more challenging conditions if the weather is hot (as it was this year) or wet (as it was last year). 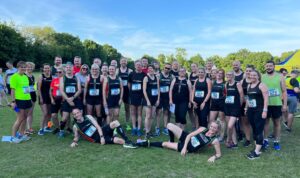 Where are all the others hiding?

On balance most people agreed that last year’s wet conditions (which makes the start and finish in the park difficult) are preferable to this year’s hot conditions (which makes everything hard work). Nonetheless there were still some exceptionally fast times from the 40 Harriers who took part. Leading home the GVH runners, as is so often the case, was Matt Ashby. He continued his excellent improvements by scoring a new Personal Best and finishing 7th overall in 35:51. Michael Linden was the other Harrier to break the 40 minute barrier on the day, finishing 16th overall and 5th in his age category, in 38:42. 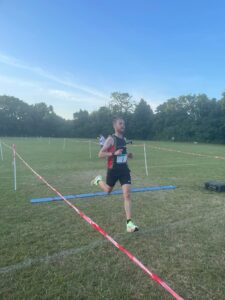 Not even breaking sweat…

Not far behind the leading pair were a couple of GVH men who have suffered recently from long term injuries. Stu Gallagher has suffered from a knee issue for almost a year now. Running last year’s London Marathon before it fully healed probably didn’t do it any favours, but he is now feeling fully un-injured (if not fully fit) and managed a more than respectable 40:00. Anthony Willcox has been injured in various different ways since before the pandemic started (although the two events aren’t related) so it is great to see him completing a 10k race at all, never mind in 41:30. Head coach Ed Price, club captain Andy Wells and Gwyn Pritchard all completed the race under 43 minutes. 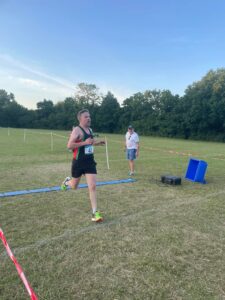 Next over the line for the Harriers was Merlin Allan. In recent months Merlin and Robert Bowler have been locked in battle to claim (and then break) the club’s V60 records. As it stood before Monday, Merlin held 3 records, Robert held 2 and Anthony Fogden’s 10 mile mark seems to be in grave jeopardy. Despite the rivalry between the two, the Solstice was the first race that saw the pair head to head. Merlin came out on top finishing in 42:56, scoring a mighty 78.22 (out of 100) age graded points, and taking the club 10k record from Robert who finished just outside his existing record a few places back in 44:38. Merlin was seen leaving the race in Robert’s car and is rumoured not to have been seen since. 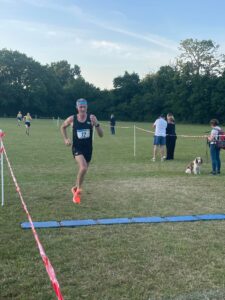 Have you seen this man?

Phil Mercer, Andy Cook and Skip Phillips finished in between Merlin and Robert with Skip bagging a new PB and a sub 45 minute time of 44:24. Tom Perry finished 5 places and 19 seconds behind Robert but, perhaps showing his inexperience in races, only 1 second behind him on chip time. Tom had the considerable consolation of also achieving a new PB, however, of 44:39 as he continued his improvement since joining the club to finish a 10k race under 45 minutes for the first time. 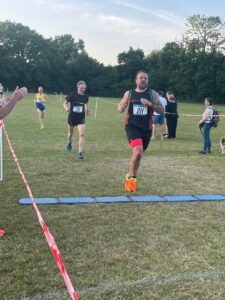 Be careful who you finish ahead of Skip!

Charlie Cadogan, Simon Wheeler and Andy Bishop were next to finish for GVH before the first of the Harriers’ women, Vicky Crawley Wise finished 21st overall and 7th in her age category, in 47:41. Paul Williams, Darren Burke, Jenny Stubberfield and Tracey Cotton were next, all finishing under 50 minutes. Jack Boughton also finished under 50 minutes, completing the 10k in 49:28. This was his first race for the Harriers and a new PB, beating his previous best 10k time by just over 3 minutes as he clocked 49:28. 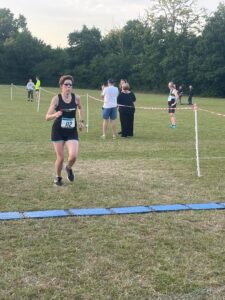 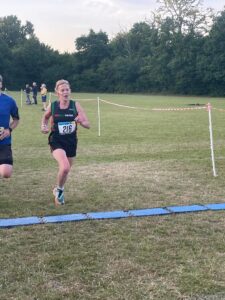 Rachel Haffenden, Helen Cook and Angeline Cottrill all ran strongly to finish within a minute of each other, closely followed by Chrissie Mooney who completed the course in 56:00, beating her previous best time for the distance. Kelly Cox finished the course in 56:52 just ahead of Kim Rodwell who was the last of the Harriers to claim a new PB on the day. 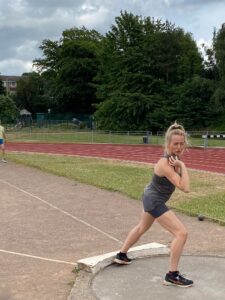 I can throw this, it weighs less than all my medals!

Ashley Owen, Jane Percival, Martin Storrie and Susie Ivin all broke the hour mark with Jane scoring a very respectable 61.26 age graded performance. Mark Whittle finished just ahead of Chris Howe, long term friends Karis Thomas and Helen Terry ran the course together, finishing in just over 65 minutes while Anita Berwick, returning from a long lay off (and looking suspiciously like Ines Trent in the group photo – but nobody told me until after I published the first draft), finished just under 70 minutes and club president Andy Newing rounded out the Gade Valley finishers. 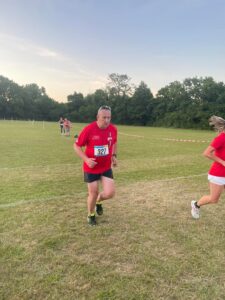 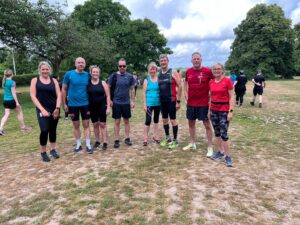 Saturday was a busy day for many people as the club had its annual sports day at Jarman Park followed by the Summer barbecue in the evening. The sports day includes track and field events for all the family as well as the Magic Mile, a rare opportunity for GVH athletes to run a timed race on the track as GVH is primarily a road running (and trail and ultra marathon) club. 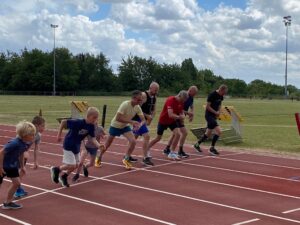 Come on lads, look at the oppo, we have to win the team prize today!!

5 Harriers took on the Magic Mile with the standout performances coming from Chris Dowling and Jon Roberts. Chris won the race in a superb time of 5:11 although coach Ed Price said afterwards that, “he was disappointed with that” while Jon Roberts crossed the line in 5:29, breaking the club V50 mile record in the process. Andy Wells clocked 5:38 while Anthony Willcox managed 6:06 and Dan Green completed his first Magic Mile in 6:32. 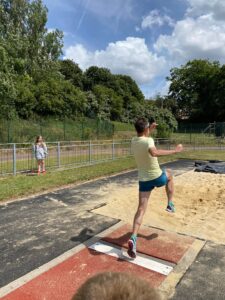 With Dave Goodman having left the club, it has been left to club legends Helen and Andy Terry to carry the competitive baton on quiet weekends. They did so with aplomb as they took on the Round Sheffield Run. According to its own somewhat hubristic website, this “unique creative format” of “11 timed stages” through “20km of superb trails and parkland across Sheffield” is “the most fun I’ve had running since I was a kid!” 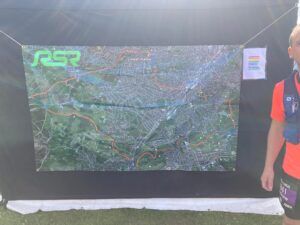 Need to try harder to make the route look like a Strava fish.

Helen and Andy certainly agreed, to an extent, with the organisers, as Helen said before the race, “All ready at the Round Sheffield Run – nice way to spend our wedding anniversary. Fingers crossed we are still married at the end!” They were competing as a mixed pair so they wore the same number and, as Helen explained “he had to stay within arms length of me – no escape”. As far as this reporter knows, their marriage remains intact. 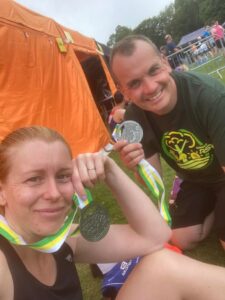 Still married at this point, at least.

As nobody seemed to be racing, or doing all that much, on Sunday, the club’s weekend ended with the annual summer party and barbecue. In true British Summer style, the event saw all 4 seasons as it started slightly overcast, had periods of bright sunshine, was windy almost throughout and finished with some spectacular rain. Michelle Wells summed up the general mood of the club when she posted on Sunday morning, “Just wanted to say a big thank you to Edward Price for an amazing family sports day. So lovely to see so many children. Also a big thank you to everyone at GVH especially Mary McCluskey for the BBQ! Shame about the rain but lovely to catch up with everyone.”