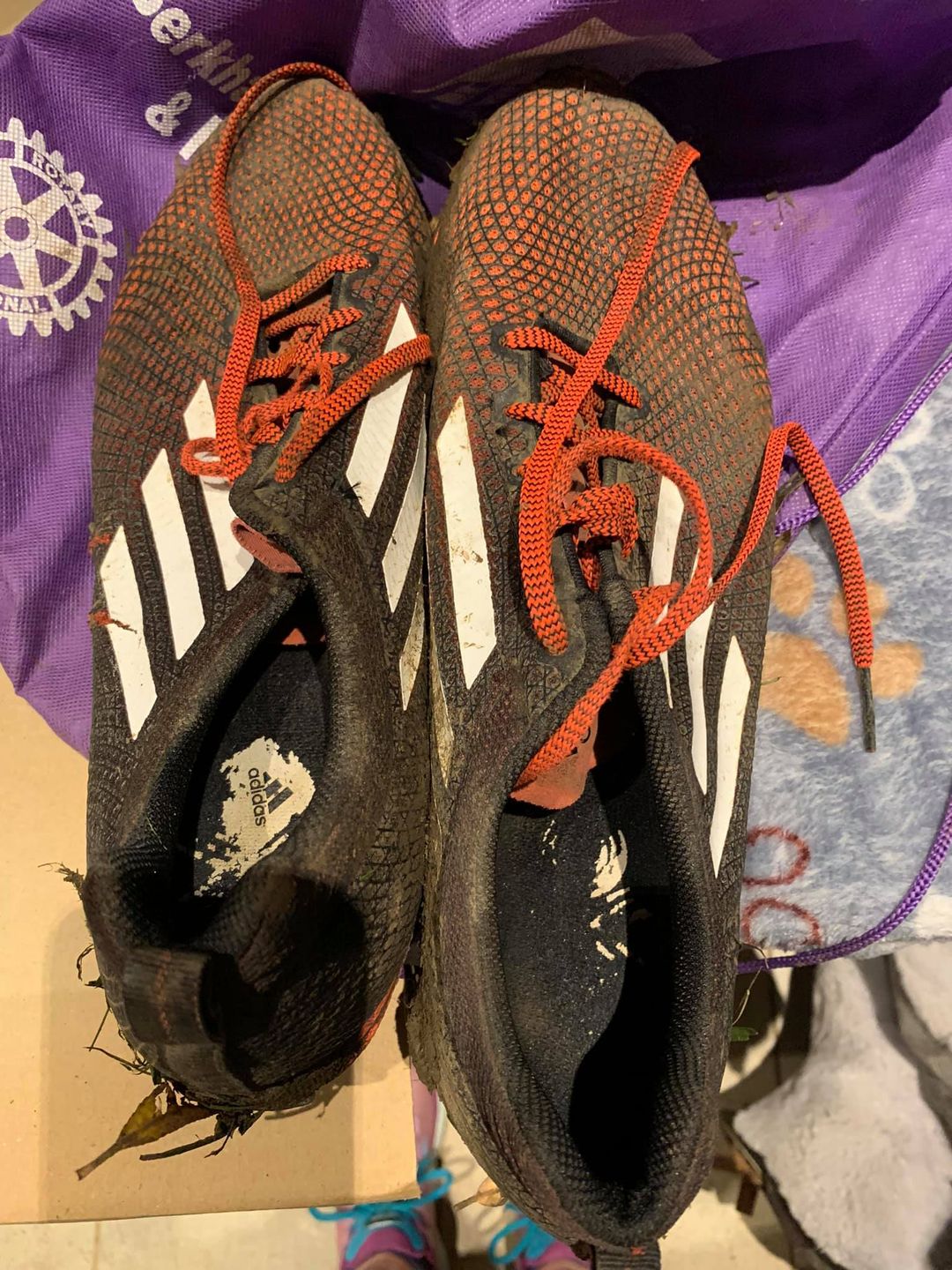 Harold Wilson is alleged to have coined the phrase that a “week is a long time in politics” during the Sterling crisis in 1964 and it is true that in today’s social media compressed World, a week is still a long time in politics and practically anything else you could care to mention. So what is three weeks (or weekends) in running? It is enough time for a couple of ultra marathons, a few Parkruns, the second round of the Chiltern Cross Country League season and, if you’re Dave Goodman, for 5 marathons, 3 half marathons, 2 10k races (1 competing, one marshalling), 7 Parkruns and about 8 PBs.

This three week whistlestop tour starts on Saturday 30th October at Newtonabbey near Belfast. Peter Tucker was a long standing member of Gade Valley Harriers until he moved away last year and still keeps in regular contact with the club. At the Newtonabbey Parkrun Peter achieved the rare distinction of completing 50 different Parkrun courses in what was his 132nd Parkrun overall. 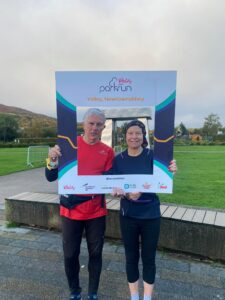 Out of sight but not out of mind

On Sunday 31st October there were a handful of Harriers taking part in a pair of races in the Luton and Dunstable area. Firstly, Dave Goodman and Lisa Newing were both at the Love Luton 10k. This race took in Luton Hoo and the surrounding countryside, finishing in the town centre. Dave volunteered as a marshall while Lisa competed in the race. She ran strongly to finish the 10k in 44:02, achieving 2nd place in her age category and 5th overall female.

Vicky Crawley Wise was taking part in the Dunstable Downs Trail Half Marathon just down the road. Before the race she wasn’t feeling optimistic as she commented “I’m about to set off for a personal worst half marathon, it is truly grim here on the downs today.” By the end of the race she was feeling a little better about her endeavour as she followed up with “It was brutal to start with, horizontal wind and rain, but in the end the sun came out. I Finished as 7th Woman and it was lovely to catch up with Jacki Eskdale at the start.” 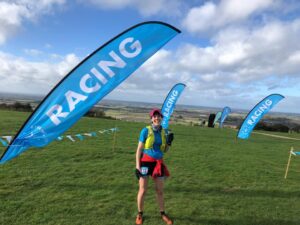 Just in case you forgot why you were here, the blue sign tells you

On Saturday 6th November, the experienced ultra running trio of Teresa Reason, Nick Crowther and Phil Mercer took on the Wendover Woods 50 mile race. As if running 50 miles is not difficult enough, the Wendover Woods 50 adds extra difficulty with some steep climbs as the 10 mile loop winds through the forest trails.

Nick and Teresa did not plan to run together and their split times show that they didn’t run together but they finished the course in close proximity to each other. Nick finished 42nd in the race, 20th in his age category, in 11 hours, 13 minutes and 7 seconds while Teresa was a mere 2 seconds behind in 43rd place (5th overall female). Phil Mercer found the going a little tougher, completing the gruelling course in just under 12 hours in 72nd overall position, 32nd in his age category. 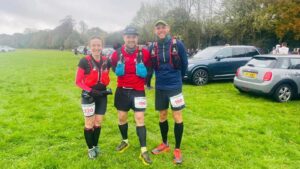 The Wendover 3 is not a criminal gang, it is a group of GVH runners

On Sunday 7th November 6 Harriers travelled to Knebworth Park to take on the Herts 10k and Half Marathon. This was the second time the event had taken place this year after the 2020 event, normally held in November, wasn’t held until June 2021.

Kittie Cole was the sold Harrier taking on the longer half marathon distance. She ran the hilly course strongly to record a finishing time of 2:10:19, finishing 3rd in her age category. 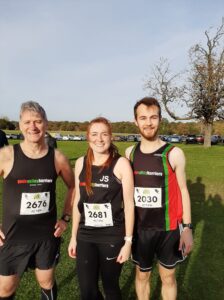 Kittie Cole is not in this picture

5 Harriers took on the 10k distance in the pleasant autumn sunshine. Matt Ashby finished first in the group, crossing the line in 5th place overall in the superb time of 38:11. Matt’s girlfriend Jenny Stubberfield wasn’t far behind as she finished in 47:26 to be 9th overall female, 5th in her age category. Martin Storrie completed a trio of very strong category performances as he completed the course in 55:26 to be 6th in his category. Tracey Scollin and Jenny Plastow also ran strongly, finishing 17th and 30th, respectively, in their age categories, both just over the hour mark. 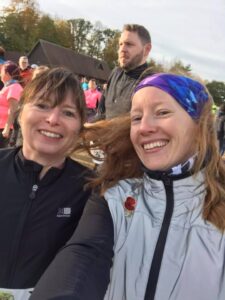 Kittie isn’t in this one either, Tracey and Jenny are though.

Saturday, 13th November saw the second round of the Chiltern Cross Country League season. As the Harriers were relegated from the top division the last time the league was contested (the 2020/21 season was cancelled for Covid), they expect to be near the top of the division two table this season, and were lying in the second of the two promotion spots after the opening fixture back in October.

The second round, at Teardrop Lakes in Milton Keynes, is always a keenly anticipated race as it includes a round of the UKA Cross Challenge, a series involving elite athletes from around the UK. The standard of the race didn’t disappoint as Hugo Milner from Derby edged out Zak Mahamed from Southampton by a mere 4 seconds, but an eye watering seven and a half minutes ahead of Matt Watt, Gade Valley’s fastest finisher, over the 9km course.

Following Matt Watt, who completed the course in 36:08 were Matt Ashby (37:01) and Mike Linden, just behind in 37:05. Jon Roberts and Gareth Tucker completed the GVH top five, with men’s captain Andy Wells finishing just a few seconds behind Tucker, who remained unavailable for comment after the race. Anthony Willcox, Steve Newing, Ed Price and James Birnie completed the list of scoring athletes, while Phil Mercer, Merlin Allan, Andy Cook and Tom Perry completed a strong showing for the club men. 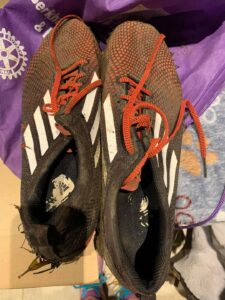 No men’s team picture, here is a picture Helen took of my spikes instead

Earlier in the day, the GVH women brought a strong contingent to the women’s race. Lisa Newing, still oddly running only as a guest for GVH, was the first woman home in GVH colours, followed 30 seconds later by the first scorer, Vicky Crawley Wise. Sam Raffety and Jenny Stubberfield were within 15 seconds of Vicky, with Kim Morgan a further 30 seconds back. Natasha Gibbs, Tracey Cotton and Claire McDonnell all completed the course under 30 minutes. Kittie Cole was the last scorer for the ladies’ team with Helen Cook, Kim Rodwell and Ines Trent completing the lineup. 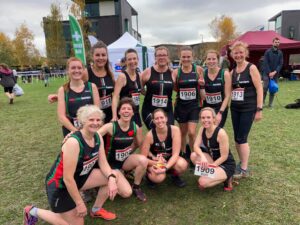 The women did manage to organise themselves a bit better

On Sunday 14th November, ultra marathon specialist Al Flowers took part in the Zigzag Remembrance ultra marathon event in the Hinchingbrooke Country Park in Huntingdon. This event is a 6 hour event where competitors attempt to complete as many 5.3km laps as they can within the time limit. At the time of the race briefing, however, Al wasn’t feeling too enthusiastic about running for 6 hours. He takes up the story: “…my ears pricked up when the Race Director said it was absolutely fine to step up or step down in distance as long as it was with at least one more lap to do. I still set off with the intention of running 6 hours but then as I started lap 4 I found my heart wasn’t really in it.”

Having decided to “drop down” in distance from the full 6 hour race to the marathon Al found that he was able to enjoy the race more, “From that point on I really did enjoy myself. My mindset changed and I just felt more able to run, to push on and feel like I was doing something good for myself, instead of forcing myself to try and enjoy something.” Al went on to complete the marathon distance, 8 laps of the course, in a hugely impressive 3:34:57.

A bigger surprise was to come for Al as he later recounted: “I crossed the finish line and asked how I’d done, and I was astonished to see I’d managed to bag my first ever marathon podium! I wasn’t too far behind 2nd and 1st either which was pretty cool to see. Yes, it’s about who turns up on the day, but also yes it is really cool to feel like you gave a good account of yourself over any distance.” Racing is always about how turns up on the day, but as local running legend Mike Dixon always said “it isn’t your fault if you win when the faster runners don’t turn up!”

It isn’t your fault that you got the bronze because the faster people didn’t show up! (the image quality is 100% your fault though)

As is often the case with GVH news, the last word will go to Dave Goodman. On Sunday 14th November, Dave said “Well done to everyone who ran cross country yesterday, looking good out there! Meanwhile in less muddier conditions I hit the streets of Athens for my 57th marathon. Perfect weather conditions, good support along the course and an amazing finish inside the original Olympic stadium. I crossed the finish line 03:28:13 [party emoji]! I finally broke the 3:30 mark and set a NEW PB by 3 minutes 30 seconds! [smiley face emoji] [see what happens if you don’t run a marathon every week emoji, shrug shoulders emoji].