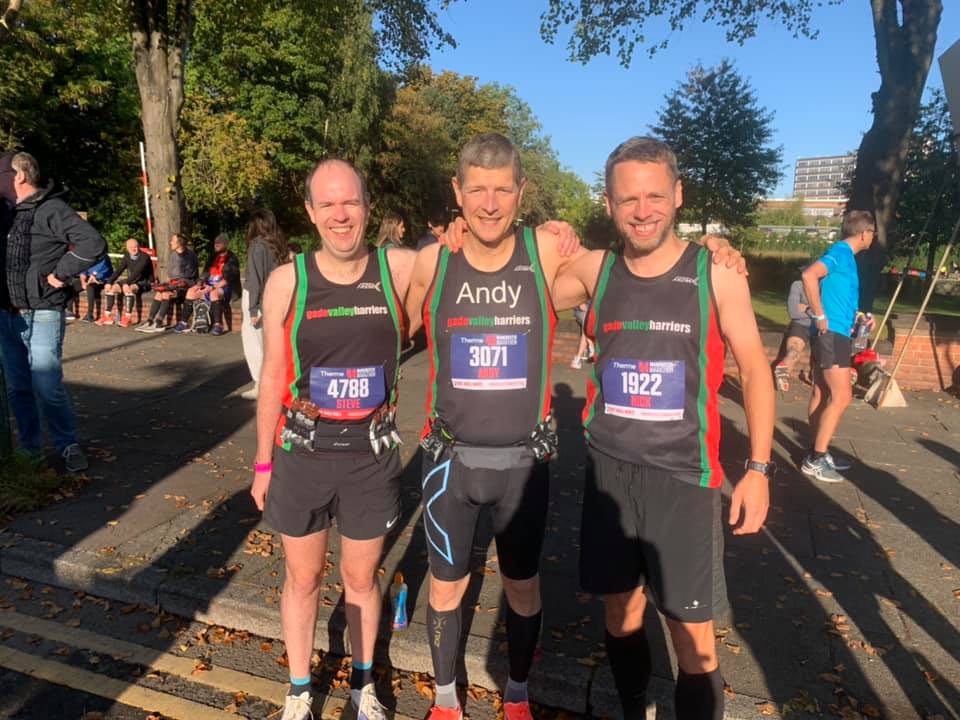 It was another busy weekend of marathon running for Gade Valley Harriers as 17 runners took to the streets of Manchester in the UK’s second biggest marathon. There were also outings for a handful of other Harriers as two took on the Royal Parks Half Marathon in London and 6 competed in the ever popular Ridgeway Run in the hills between Tring and Ivinghoe.

The Ridgeway Run is a long standing local race run by Tring Running club since 1982. The race is a challenging trail race of around 9.5 miles which starts in Tring before climbing steeply up through the fields to the Bridgewater Monument in Ashridge. The route then follows the Ridgeway, thought to be Britain’s oldest road, up and over Pitstone Hill near Ivinghoe Beacon before returning back down to Tring via a different path and finishing at Tring Park Cricket Club.

As with many events, the Ridgeway Run was cancelled in 2020 and it seems that the hiatus didn’t do the organisers any favours as the registration process seemed somewhat chaotic. Jan Hudson said “So sorry for Matt [Ashby] and Jenny [Stubberfield] being caught up in the registration chaos, and therefore getting stuck behind the slow runners & walkers at the start – unable to get past them for a long time!!” It didn’t seem to do Matt too much harm as he recovered from his slow start, losing around 90 seconds on the leaders before getting through the start line, to finish 16th overall in a chip time of 1:04:20. Jenny was around 20 minutes behind her partner, finishing in a very respectable 178th position out of 472 finishers. 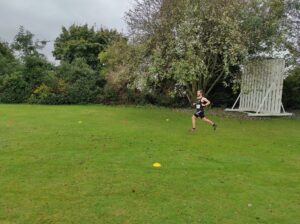 Matt Ashby at the finish of the Ridgeway Run

Lisa Newing was the first Harrier woman to finish the course. She finished in 95th place, just under four minutes ahead of Claire McDonnell who in turn finished just 4 seconds and one place ahead of Vicky Crawley Wise. Rich Peters was the other Harrier taking part, he finished in 150th place.

The Royal Parks Half Marathon starts at Admiralty Arch on the Mall and takes in views of Big Ben, the Houses of Parliament, Westminster Abbey, Buckingham Palace, Kensington Palace and the Royal Albert Hall as it passes through St James’ Park, Green Park and Hyde Park before finishing on South Carriage Drive in Hyde Park. Chrissie Mooney, Dave Goodman and Priscilla Pathak represented Gade Valley at the race with Chrissie Mooney recording a new PB, completing the race in 2:09:42, Dave Goodman recording an excellent time of 1:29:48 and Priscilla running strongly to record 2:06:50. 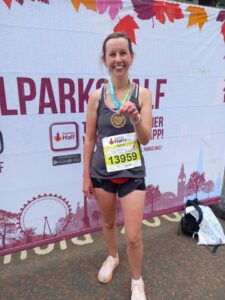 Away from London, Gade Valley’s female athlete of the year, Teresa Reason was yet again in ultra marathon action, this time taking on the Camino Ultra Epping Forest 50km race. Teresa was again in strong form, completing the course in 4 hours 51 minutes to finish as 3rd overall female.

The main event of the weekend was up in Manchester as 17 Gade Valley runners took part in the three times postponed Manchester Marathon. Originally scheduled for April 2020, then postponed to October 2020 and April 2021, the race was a long time coming.

Nick Crowther and his wife Sue provided the standout performance of the weekend and possibly the best ever Gade Valley Harrier husband and wife performance. After reading about the near divorce suffered by Helen and Andy Terry last week, Nick and Sue wisely decided to give each other a wide berth before and during the marathon. Awarded the prestigious Most Improved Athlete trophy at the club AGM two weeks ago, Nick had high hopes of running a fast time in Manchester. He didn’t disappoint the crowd as he delivered a superb new PB finishing in 438th position out of 13849 finishers in 2:58:14. Sue also ran a new PB, her time of 3:55:36 was, like Nick’s time, comfortably inside the Good for Age qualification time for the London Marathon which makes Nick and Sue the first married couple in the history of the club to gain GFA places in the World’s most prestigious city marathon. 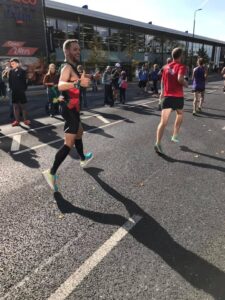 Heat, what heat? I’m having a ball!

Michael Linden, the newly crowned GVH Athlete of the Year, was also hopeful of running a new personal best in Manchester. He also didn’t disappoint, shaving over 5 minutes from his PB. He did, however, fall agonisingly short of breaking the 3 hour barrier for the first time, crossing the finish line in 3:00:14. He was far from disappointed, however, commenting “or course I’m happy, how can I not be happy? How far have we got to walk now? 25 minutes? Oh no…” 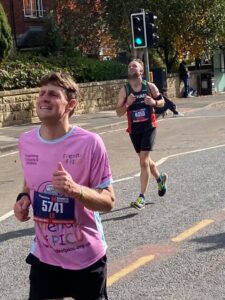 One person who wasn’t threatening to break a PB was James Birnie. After a summer blighted by injury and illness he came into the Manchester race, “the most underprepared I’ve ever been for a marathon.” The unseasonably hot weather didn’t help, nor did the unexplained 15 minute delay to the start of the race. “I spent 3 years in Manchester and never saw the sun once. I’ve now done two Manchester Marathons on boiling hot days and I could feel my bald bits getting sunburnt even before the start!”, lamented James at the end of a gruelling race. He still managed to complete the course in a respectable 3:19:16. 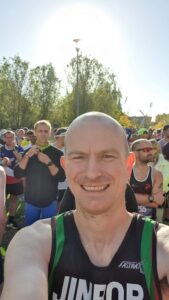 Steve Newing was next over the line for GVH, becoming the third of the runners to bag a new PB time. His time of 3:21:02 shaved around 45 seconds from his existing PB and was a superb effort given the conditions. Men’s club captain Andy Wells was stationed around the 25 mile mark and commented “Steve was looking good at the end. I thought he might catch Birnie because he was walking but it looks like Birnie just held on.” 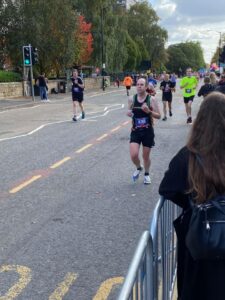 Phil Mercer and Roly Kendall also ran in Manchester. Phil ran strongly through the heat to record 3:26:11 and Roland narrowly missed a new PB, finishing the race in 4:01:25. Roly summed up how many people were feeling when he said “No PB for me today, just happy to get round that one!”

The Crowthers were not the only family from the club to take to the Manchester Streets. Club chairman Andy Cook, his wife (and club secretary) Helen and their daughter Alice all enjoyed their day out in the Manchester sun. Andy was first in the family, completing the distance in 3:25:24, followed by Alice who ran a new PB of 3:45:34 and Helen, who also grabbed a new PB, in 4:10:07. 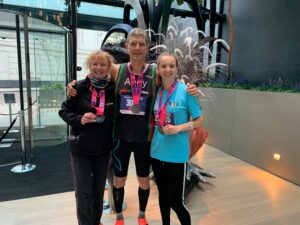 Two PBs and an imposter celebrate their achievements

Sam Sparks was taking part in her second marathon after making her debut back in April and she chose to run the route with her friend Gemma Tucker who was taking part in her first marathon. Gemma’s target was to run the race in under 5 hours so she was extremely happy to complete the course in 4:50:09, having run all the way with Sam. Gemma’s husband Gareth, fresh from his own PB at the London Marathon last week, was part of the Gade Valley cheer squad on the course. He was unavailable for comment after the race. 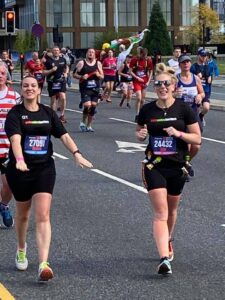 Sam and Gemma stuck together

Also taking part in their first marathons were Natash Gibbs, Laura Johnson and Martin Pike. Unusually, although this was Martin’s first official marathon race, he has previously competed in two ultra marathon races, one of 50km and one of 100km, during the summer, so a mere 42.2km will have held no concerns for him. This proved to be the case as he put in an extremely strong performance to finish in 3:47:10. Natasha completed the course in 4:19:15 and Laura crossed the line in 4:39:24. 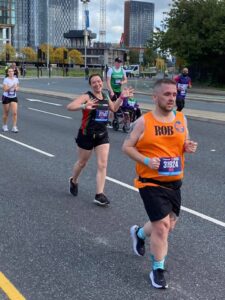 Laura was happy to be running her first marathon

Kim Morgan and Sam Raffety are very best friends. Not in the Peppa Pig and Susie Sheep sense (as far as can be told, they actually like each other) and they run together very regularly. They run together so often, in fact, that it was a surprise to many to see photographs of the Manchester race in which they were not running together. Strangely, the results show that Kim ran a time of 3:59:10 (for a new PB) and Sam completed the course in 3:59:06. 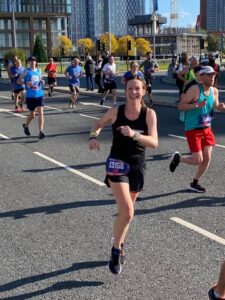 Not unnaturally, the question was asked as to how the two were not photographed together and Kim took up the story: “Myself and Sam were together on the start line and again at the finish but not in the middle”. She went on to say “My marathon was a race of two halves: the first half showing on Strava as a half marathon PB and the last half sadly being a painful run / walk”. Sam added, “I caught up with Kim after mile 24 and she spurred me on. Would never have slipped under the 4 hour mark without her”. Kim finished with “Likewise! Was incredibly pleased to be reunited for the end.” All of which goes to show that friends should always stick together. 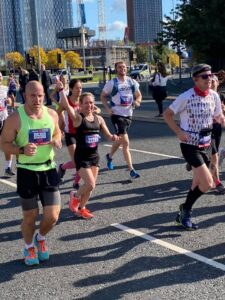