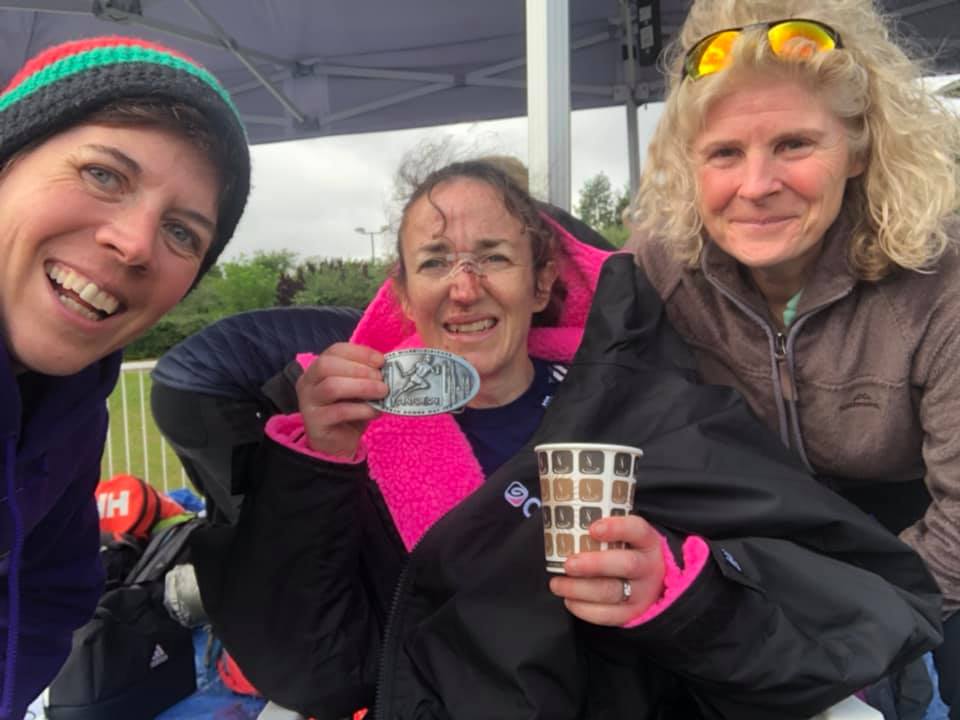 Summer holidays kicked in for the Gade Valley Harriers as several of them took on parkruns around the country and beyond, a few stay-at-homes contented themselves with a local 10k race in St Albans and one Gade Valley Harrier drove herself to the edge of Reason as she took on the North Downs Way ultra marathon on the weekend of 7th and 8th August.

Teresa Reason chose to put herself to a severe test of endurance and mind over matter in the North Downs Way ultra race. The race starts in Farnham in the Surrey hills on Saturday morning and follows the North Downs Way all the way to Ashford in Kent, a distance of around 103 miles with a total climb of 10,000 feet. To put this in context, a marathon, considered to be the ultimate test of “conventional” long distance running, is just over 26 miles in length and usually very flat on good, even, roads. The North Downs Way trail ultra marathon is approximately equal to 4 marathons in distance, with about 10,000 feet more of climbing, on slippery, uneven trails.

For Covid safety the race had a rolling start for the 286 competitors, between 5:00AM and 6:00AM on Saturday morning with Teresa setting off at 5:02AM. The weather was mixed throughout the race with torrential rain interspersed with hot sunny spells ensuring that the extreme distance, the hills and the uneven trails weren’t the only challenges the racers faced.

Teresa got a flying start, was running strongly, tackling the famous box hill with ease. Unfortunately around the 30 mile mark she slipped and fell in the woods causing wounds to her face and bruising to her body. The fall cost her a lot of time at the next two aid stations as she received medical attention to clean the wounds and stem the bleeding. Many people would have considered pulling out at this stage but Teresa just considered such mishaps as “part of the game” and carried on.

The rules of the race allow pacers to join competitors on the course from the halfway mark so at 54.4 miles in the village of Otford, Teresa’s crew (Claire McDonnel and Vicky Crawley-Wise) joined the race. At Otford Teresa changed her shoes and socks as Claire and Vicky cleaned her wounds and steri-stripped her nose back together. Then, with additional fuel onboard, Teresa set off with Claire for a wet and muddy 18 miles.

As Teresa was suffering Claire was enjoying herself on what she described as “my perfect kind of run”. The aid stations along the route were packed with hot drinks, food and friendly faces and Claire was particularly appreciative of the surroundings and the people: “hills, mud and I got to stuff my face at three different points and get off my face on full fat Coke.” All of the food and fuel clearly had a good effect on Claire as she chose to stay with Teresa for 4 miles more than originally planned, finally taking her leave after a 22 mile leg at Bluebell Hill, 76 miles into the race.

While Claire was running with Teresa, Vicky had been driving from aid station to aid station providing fresh kit, food, moral support and the occasional bit of medical attention. At 1:00AM on Sunday morning, after several hours of sterling support, it was Vicky’s turn to join Teresa on the course for the final 20 miles as Claire returned to the hotel to watch the Olympics on TV.

Fortunately the night was clear, the rain having finally stopped and it was a relatively mild 12 degrees. The 9.5 miles to the next aid station at Lenham were over some incredibly challenging terrain with a huge amount of climbing, mostly involving stairs, and windswept hilltops. Vicky said “The North Downs Way was once part of the Pilgrims way to Canterbury and it felt a bit like we were on a pilgrimage, all these little lights bobbing along with one aim, to reach Ashford in under 30 hours.”

Running through the night without sleep can be extremely challenging, both physically and psychologically, and the 10 miles to Lenham were probably the toughest and coldest. At Lenham Vicky helped to dress Teresa (whose teeth were chattering) in extra clothes and helped her into her gloves. They were told by a volunteer that when the sun came up their body clocks would start to respond and they would feel better. Fortunately, that prediction proved to be correct. As the pair moved away into the approaching dawn they were feeling a bit more positive, knowing that there was only another 13 miles to go.

The rising sun revitalised the runners and gave them the belief they needed to complete the course. They were now battling Teresa’s fatigue as she had been awake for over 24 hours and was “literally sleepwalking”. At the final aid station at Dunn Street Teresa drank a strong black coffee which gave her the energy to tackle the last 4.5 miles.

After about 100 miles of racing, the course leaves the trails and heads along country lanes into Ashford. The final section was mostly flat and the tarmac road was a great relief for legs wearied by the trail. Claire was at the stadium waiting to meet Vicky and Teresa, where there was just 300 metres around the track to complete the race. Only 111 of the 287 starters finished the course within the cut off time of 30 hours. Teresa was 69th finisher overall and 8th woman.

Vicky summed up Teresa’s achievement with the following: “Claire and I think it was an honour and a privilege to crew for Teresa. We are in awe of her toughness (both physical and mental) to have achieved such a distance in 28 hours 18 minutes. We are so proud of her, of being a small part of that and having a truly incredible experience. At the time she was saying ‘never again’, but we won’t hold her to that as we know there is unfinished business. We learnt loads and certainly will be a much better crew next time!” 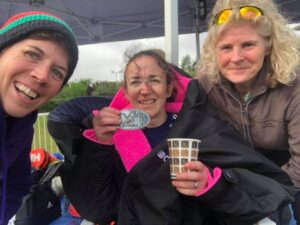 Teresa celebrates with Vicky and Claire

Away from the Edge of Reason, Saturday morning is now firmly back on everybody’s calendar as Parkrun day and it is now starting to feel like it was never away, despite its 18 month absence. As always there were dozens of Harriers taking on the 5k courses around the UK but on Saturday 7th August, Ines Trent took the spoils.

Ines was in Poland visiting her family for the first time since before the first lockdown and she took on the Gdynia parkrun, near the Baltic Sea, on Saturday. She said “It was rather a hot day but the route was beautiful, running just off the Baltic coast. It was a much smaller event than in the UK but equally supportive and friendly. There were only around 40 participants and a very small number of volunteers. Unfortunately there’s no marshals on the route so I took a wrong turn.There was a guy on a bike hollering at you if you went the wrong way and if you were lucky enough to get spotted. People gather afterwards and there’s some refreshments too. I was able to record my time using a parkrun code that I use in the UK as it’s universal as I found out.” Ines finished the 5k in 32:48 and took the Parkrun Tourist prize comfortably.

The St Albans Summer 10k has long been a favourite race for local athletes. The race starts in Highfield Park and follows a similar route to the Summer Solstice race along the Alban Way, an old railway line, towards Hatfield, before looping back to return and finish in Highfield Park. If the weather isn’t too hot, the largely flat course can offer the possibility of a PB for anybody who has managed to avoid too many barbecues and keep themself in shape.

As with the Bearbrook race last weekend, this race on Sunday 8th August was attended by just a handful of Harriers as the pandemic still seems to exert a lasting influence on race numbers. Robert Bowler was again to the fore for Gade Valley, taking advantage of the good running conditions, finishing 68th overall (out of 342 finishers) and 16th of 52 in his age category in a time of 44:27.

Nicki McDermott and Martin Storrie were the other Harriers in St Albans. Nicki ran very strongly to finish the course in 54:05, just 11 seconds outside of her existing PB. Martin Storrie, competing for the first time since before the pandemic, finished in 56:52, 10th in his age category. After the race Martin said “not bad for an old git!! (V60 these days!!)” Teresa Reason had recovered sufficiently from her weekend’s racing to pass her congratulations to Nicki and Martin, only to be told that 10k is “just a warmup for [Teresa]!” Perhaps wisely, Teresa commented that she will “…stick to 10k from now on!”. Only time will tell if Teresa is as good as her word with that one!