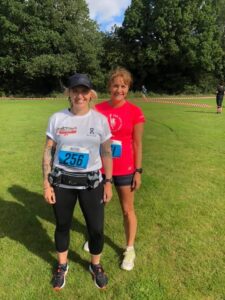 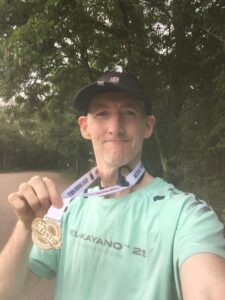 Since restrictions on large groups of people were introduced in March virtual racing has become standard for thousands of runners around the world. So when Active Training World announced they were holding a 10k in St Albans this Sunday after a relaxation of restrictions, a small number of members from Gade Valley Harriers decided it would be a good opportunity to get back to actual racing. Some of us couldn’t get motivated to enter virtual events so it was the desire to get back to regular racing, as well as the intrigue of how a race event would work under current social distancing guidelines, that led us to enter.

ATW are renowned for their laid-back approach to hosting low key, well organised events. But due to the current situation they had to put strict measures in place to ensure the event adhered to the rules. There were no changing facilities or baggage hold in the event village, and there was to be no mingling with friends and club mates.

After we registered our attendance, collected race numbers and sanitised our hands using one of the many hands-free sanitiser stations, we were guided to our start pens which had been meticulously planned according to our estimated finish times, and included toilets – with no queue – and yet more sanitiser.

Myself and club mate and life-long friend Phil Mercer were both put in the blue pen. Fellow club mates Andy Cook and Dave Goodman were penned together in the green section as they had estimated slightly slower finish times, while Michael Linden was in the faster yellow pen.

We then waited in our pens with around thirty to fifty other similarly paced runners until we were called to the start area in even smaller groups of eight to ten. The start area was equally formal as we lined up in the style of a motor racing grid, in order based on our given finished times, each with a two meter gap between us. Waves of runners were set off several seconds after each other, with the plan that if everyone had given an honest estimated time, there would be no overtaking or bunching up, and therefore social distancing would be maintained throughout. But instead of being in the start area breathing and sweating over each other for five minutes and constantly worrying about whether we had enough time for another toilet trip, it was actually quite refreshing to be on the starting grid for a matter of seconds before setting off on our run.

Phil and I have done many things together over the years. We’ve ran together, worked together, partied together, holidayed together, we’ve even shared houses with each other. One thing that has never happened though, is Phil has never beaten me in a race. It was only a couple of years ago that he would have put a ten or fifteen minute slower time down for a 10k, and even more for longer distance races. But such has his improvement and development been over the last few years, at St Albans he’d put down a quicker finish time than I did, meaning he set off before me.

The route itself was mainly a flat out and back along the Alban Way – a disused railway line – from Highfield Park towards Hatfield, which included the pungent smells of the household waste recycling plant either side of a glamourous stretch along the side of the busy A414 dual-carriageway.

The way the start was organised meant that at no point during the race was I running alone, as most of my wave of starters stayed together for the first half of the race.

As I haven’t raced or pushed myself in that kind of environment for nearly six months, I over estimated my fitness levels and was inevitably passed by more realistic runners in the last few kilometers. However, when someone in an irn-bru vest tried to pass me as we re-entered the park towards the end of the race, I somehow managed to find a second wind and beat him with a sprint finish.

Once we crossed the finish line, we collected our medal, which was laid on a table in a sealed bag, and a sealed bottle of water and were ushered back to the car park. No waiting for friends in the event village or cheering our club mates across the line were allowed.

Linden was the first Harrier to cross the start and finish line, clocking a personal best (PB) of 38:23. Mercer also picked up a PB – and beat me for the first time in the process – crossing the line in 40:06. Cook (41:15) also beat my time of 42:19 despite starting a whole pen further back. I would blame it on over doing my birthday celebrations the previous day, but I didn’t actually do anything, so I’ll just applaud all three and look forward to restoring former glories in the future.

Goodman completed the course in 50:54, just a week after taking part in an ultra-marathon.

Once we were all safely finished and out of the way, the organisers had to do it all over again as the 50-plus minute runners set off in equally socially distanced circumstances.

Congratulations to ATW for putting on a race in difficult circumstances, and although it was far from what we are used to, it was strangely enjoyable.

Written by some old bloke who drinks too much and runs too little.