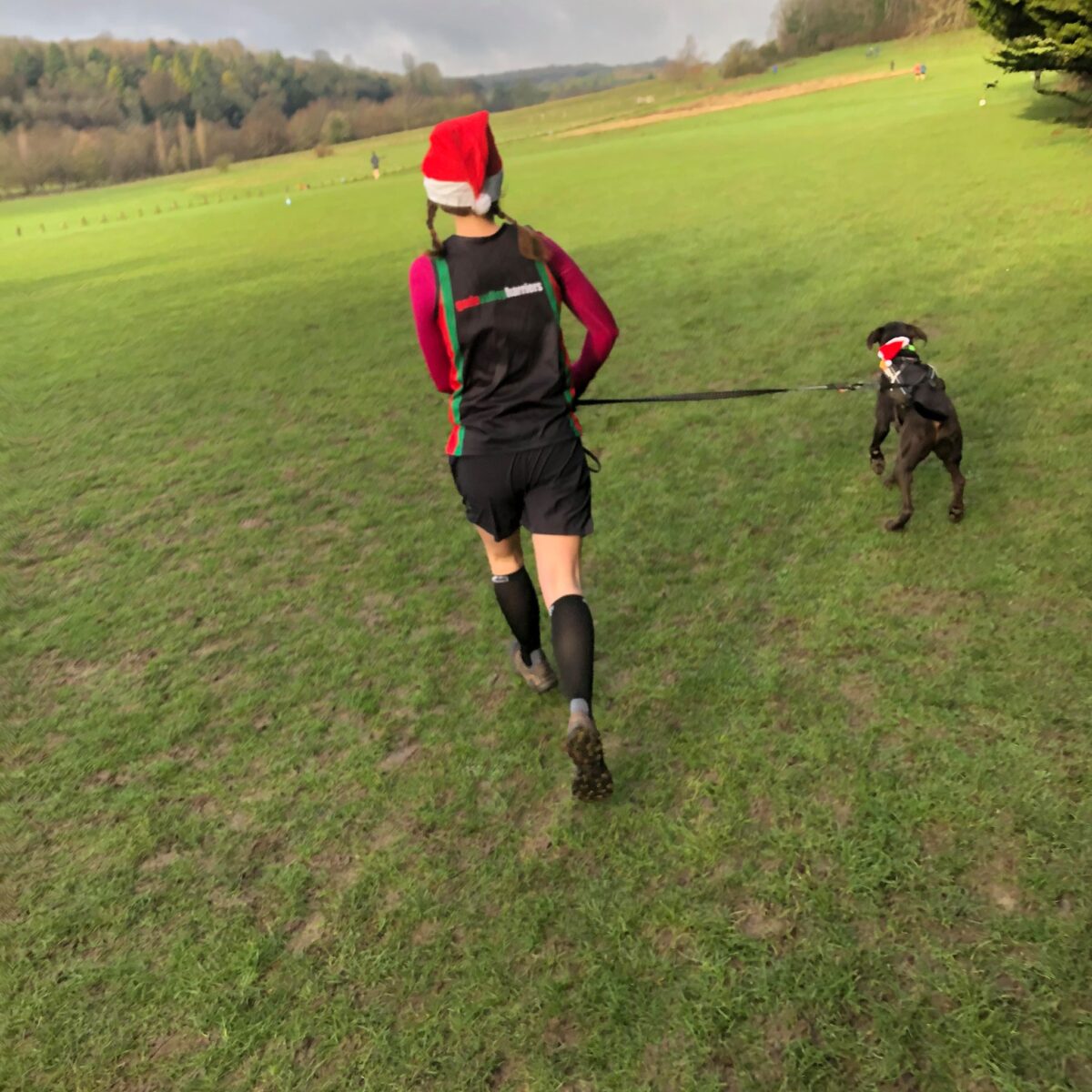 This weekend saw more events emerging from the Lockdown slumber, rubbing their eyes and slowly stretching in the new sunny dawn of the socially distanced, Covid Safe racing era. At least that would be the romantic view of the Gade Valley Harriers taking part in three separate events over the weekend. The reality though was of a miserable wet weekend in which being outside at all, never mind running a race in it, was uncomfortable to the point of being hazardous. Despite the miserable weather many of the Harriers carried on the excellent form of last weekend as several more new personal best times were set.

Setting the ball rolling on Saturday morning, and benefitting from the least bad weather of the weekend, was Phil Mercer who took on the Olympic Park 5k event. This event starts and finishes in the shadow of the Orbit Tower near London’s Olympic Stadium and follows a fast route around the flat surrounds of the park. Mercer continued his superb post lockdown form to grab his second PB in 6 days, this time clocking 18:49 and taking over a minute off his previous best time.

Also on Saturday was the Maverick Original East Sussex Trail Race. This race is usually held in the summer when running on the trails of the South Downs doesn’t include the additional hazard of slipping in ankle deep mud and drowning. One brave soul from the Harrers, Heather Taylor, took on the longest of the races, a 23k slog through the mud, rain and cold. Heather wasn’t alone, however, as she was accompanied for the whole distance by her dog, Bob. Heather dealt brilliantly with the course and the conditions to finish in fourth place in the ladies’ race in just over 2 hours. 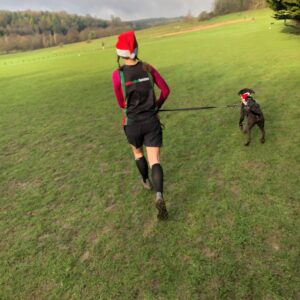 Heather Taylor takes on the Maverick Trail race with her dog, Bob.

The biggest event of the weekend was the Milton Keynes Winter Half Marathon. In common with other events the Milton Keynes race has had to implement staggered start times to maintain social distancing. As well as the staggered start times, in order to accommodate the demand for entries, the organisers spread the race over both days of the weekend with half the field running on Saturday and half on Sunday.

Five Harriers took on the distance on Saturday. Sam Richards was first home in 1:34:33, setting himself a new PB, followed by Mel Hardy who narrowly missed breaking 1:45:00 but still set a new PB with 1:45:06. Laura Johnson was next, in her first ever half marathon and broke the 2 hour barrier finishing in an excellent 1:54:15. Debate still rages in running circles as to whether a first ever race counts as PB. This writer is in the camp that it counts, so well done to Laura on her half marathon PB. Completing the Saturday runners were Thomas Perry, who also broke 2 hours, finishing in 1:57:49 and Kim Rodwell who completed the course in 2:11:40. 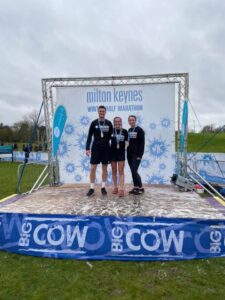 Mel Hardy, Sam Richards and Laura Johnson get the best of the weekend weather

The Sunday starters were led out by husband and wife Hamish and Sian Shaw. The Shaw’s usually spend their summers touring the triathlon circuit and Hamish commented that a wetsuit would have been a useful piece of kit for the race on Sunday. This was the first post lockdown race for the Shaws and Hamish was hopeful of getting close to his PB but the conditions meant that proved to be out of reach. He still managed a very quick 1:22:16. Martin Pike finished between the Shaws in a new PB of 1:31:28, a superb time in only his second half marathon. Sian Shaw was next in 1:36:35.

Dave Goodman is probably the most prolific Harrier. In a pandemic free year Dave generally races at least once a week, twice if he can, as well as taking part in Parkrun on most Saturday mornings. Dave is usually either running a marathon or recovering from running a marathon (last year he completed over 30 marathons) so the lockdown has been felt more keenly by him than most, although it rumoured that he will be able to afford a new car with the money he has saved in race entry fees. His time of 1:38:29 was a great effort given the conditions. 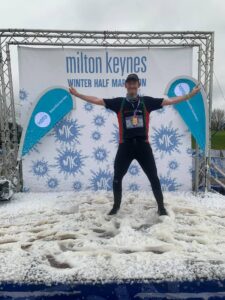 Kim Morgan and Sam Raffety started the race together (at a safe social distance of course) and stayed in Covid-close proximity for around 3 miles when Kim pulled away. The awful conditions took their toll on her, however, and she struggled in the second half of the race. She managed to dig in and was nearly caught by Raffety in the closing stretch but managed to stay just ahead, saying afterwards that Raffety had kept her going to the finish. They crossed the line within 8 seconds of each other, Morgan in 1:43:42 and Raffety in a time of 1:43:50. Kim narrowly missed scoring a new PB while Sam lowered her own PB by a massive 4 minutes. 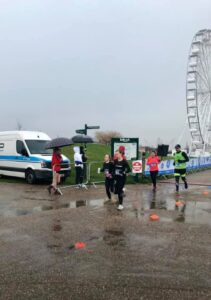 Ines Trent, after her first 10k race last week, was taking part in her first ever half marathon at Milton Keynes. She said at the end “…it was hard, was my virgin half and the weather made it worse but enjoyed the course overall.” As it was her first race her time of 2:43:04 stands as her PB but hopefully only until April when she will be running her second half marathon, hopefully in much more clement weather!