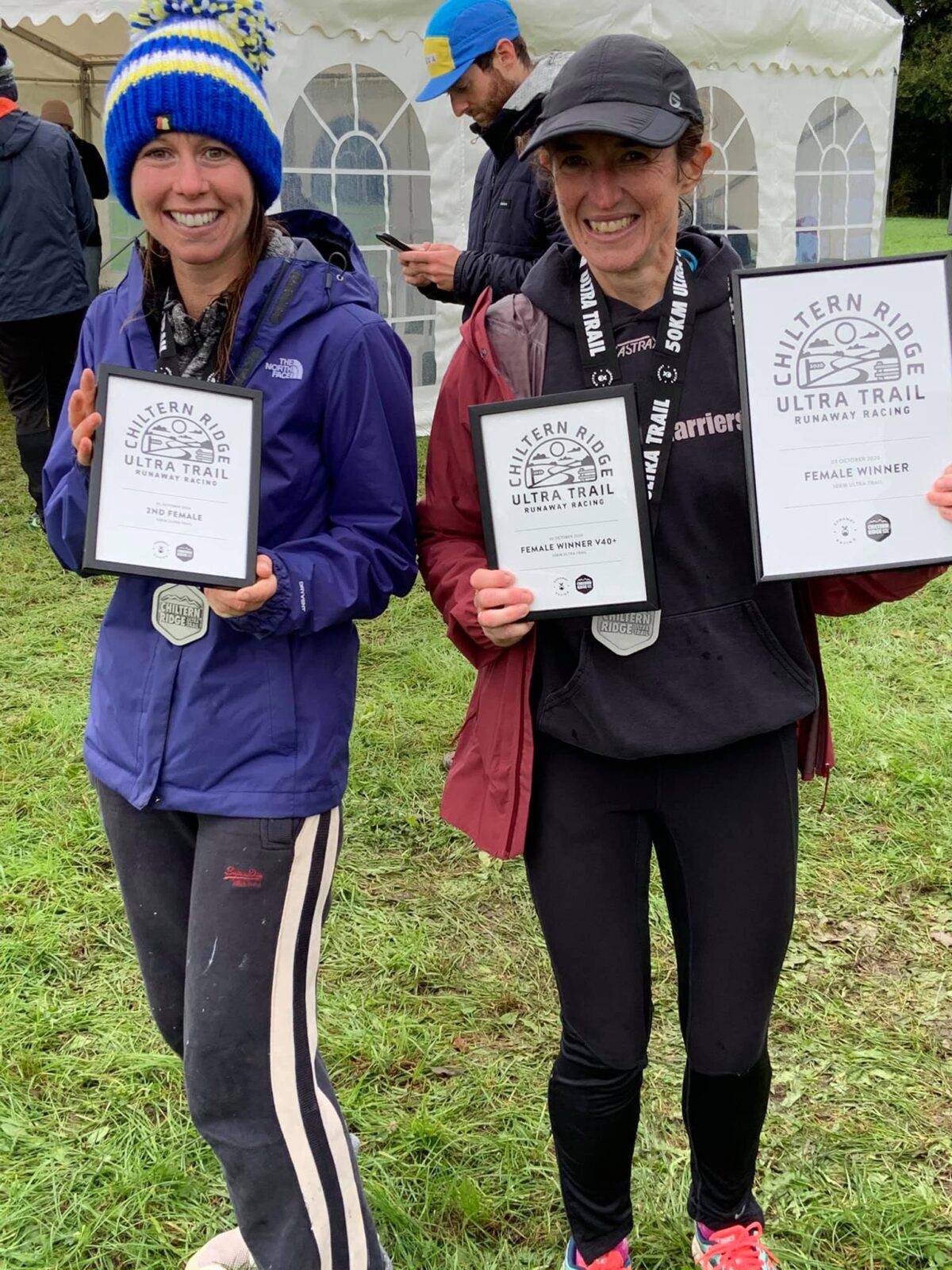 This weekend saw a return to racing for many of the Harriers with 6 taking part in the Chiltern Ultra on Saturday, 7 tackling the Eton Dorney Marathon on Sunday and a further 7 Harriers joining 45000 or so others around the world in the Virtual London Marathon.

The Chiltern Ultra is a 50k trail race around the Chiltern Hills starting and finishing in Wendover. It takes in parts of the Ridgeway, the Ashridge Estate, Aldbury and Wendover Woods. With over 1000m of elevation this race is a serious challenge. 6 Harriers were up to the challenge with Teresa Reason and Heather Taylor providing the stand out performances.

After about 48 of the 50k Teresa Reason and Heather Taylor were virtually neck and neck in the lead of the ladies race, over 10 minutes ahead of their nearest rival. With the finish line getting closer Taylor’s challenge for the win was finally broken when she struggled to climb over a stile and lost her rhythm. Reason was able to pull clear and finished just 45 seconds ahead of Taylor in 5:03:56. Taylor said “Teresa was super strong and had that finishing sprint! Whereas I couldn’t get my legs over the last stile.” 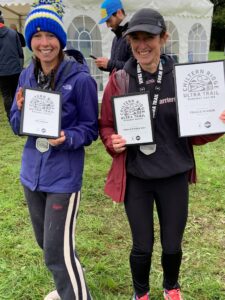 First and second at Chiltern Ultra

Chris Dowling was the strongest of the Harrier men over the 50k course, finishing 8th overall in 4:38:05. Nick Crowther finished 12th and Phil Mercer crossed the line 24th in his first ultra marathon. Jono Marval completed a strong team performance coming in 27th. With Reason and Taylor finishing in 16th and 18th overall, all 6 Harriers finished in the top 27 in a field of 88 starters. 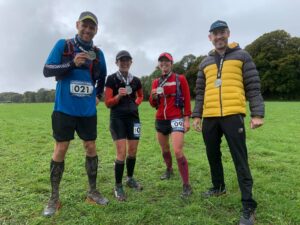 After the Chiltern Ultra

With the big city Spring marathons all having been initially postponed until October and then cancelled, many runners had been searching for an outlet for their fitness, carefully built up during the lockdown summer. Some took advantage of the Virtual London Marathon but others, seeking a more authentic racing experience, entered the Eton Dorney Marathon. Eton Dorney is a pancake flat piece of Surrey countryside around the lake that hosted the rowing events in the London Olympics. As well as the usual challenge of running 26.2 miles those taking on the course had to deal with the mental pain of a course consisting of 8 featureless laps.

A strong Harriers team was led out by Stuart Gallagher who, despite scooping the Best Male Newcomer award at the previous week’s annual awards, was running his first official race in the black, red and green vest. Gallagher had planned to run with Phil Robbins but due to the Covid regulations and the requirement to set the runners off in waves, they were forced to run separately. Despite not having his pacemaker, Gallagher knocked an incredible 18 minutes off his PB, crossing the line in 2:58:00. Robbins said “Stu got it done without me pacing”, as he followed closely behind, also ducking under the three hour mark. 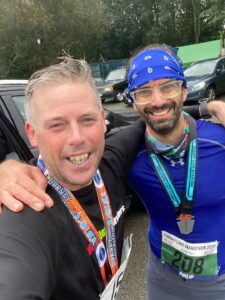 Phil and Stuart after Dorney Lake

5 other Harriers took part at Eton Dorney achieving a host of notable firsts. Chairman Andy Cook was running with his daughter Alice in her first marathon. Sam Raffety and Kim Morgan were both running their first official marathon after both had run solo marathons in the Spring and Dave Goodman was running his first marathon of the week. 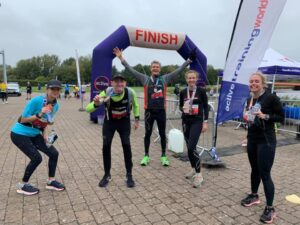 After the Dorney Lake Marathon

Andy Cook crossed the line just ahead of Alice who clocked a superb 3:47:00. Dave Goodman recorded a creditable time of 3:44, commenting after the race that he was “just happy to finish as the winds took their toll”. Sam Raffety and Kim Morgan posted excellent times, Raffety with 3:57:32 and Morgan just missing out on a sub 4 hour time with 4:01:16.

Sunday also saw the Virgin Money London Marathon. Covid restrictions meant that instead of the usual Greenwich to Buckingham Palace route, the elite field featuring World Record holder Eliud Kipchoge and Mo Farah (as a pacemaker for the British athletes) raced over a 20 lap course around St James’ Park.

While Ethiopia and Kenya’s finest were getting dizzy in London, 45000 athletes around the World were taking part, via an app, in the Virtual London Marathon. 7 Harriers took on a specially designed 4 lap course starting and finishing at the Harriers’ Boxmoor base. Storm Alex had flooded parts of the original course forcing head coach Ed Price into a late redesign and some hasty distance calculations. The vagaries of the technology saw each athlete finishing in their own way as they waited for their distance to tick up to the magic 26.2 miles. 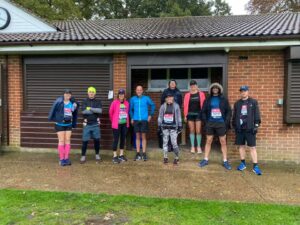 Before the Virtual Marathon 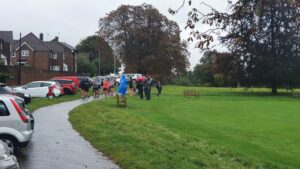 The start of the virtual marathon

Michael Linden was the first to complete the distance, he had to complete a lap of the cricket ground to make up his 26.2 which turned out to be something of a lap of honour as he clocked a PB of 3:08:35, taking a full 9 minutes off his previous best. He had been set for an even quicker time, completing the first half in around 92 minutes but found the wind and the solitude tougher as the day progressed; “I just died in the last four miles”, he said in an eerie echo of Kipchoge’s post race debrief, “but then, who doesn’t?” 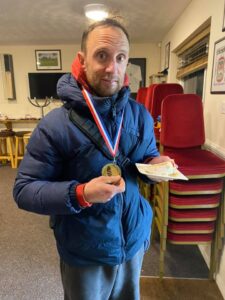 Cake for Mike Linden after his PB in the virtual marathon

A trio of Gade Valley ladies took on the virtual race in the foul weather. This year more than any other completing a marathon is not necessarily about the absolute time, more about the achievement of personal targets. Kirstie Neale in her first marathon achieved her target of ducking under 5 hours, stopping the clock at 4:57:01. 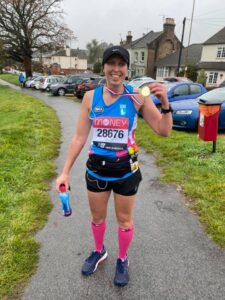 Kirsty Neale after the virtual marathon

Jane Percival had run 10 previous marathons and had decided not to run any more. After breaking her ankle in 2019 she was persuaded out of retirement by her boyfriend to run one final London Marathon. Like everybody else they had to settle for the virtual race but she ran steadily throughout and posted a new PB on her first marathon since her injury. She completed the course in 4:29:39, taking a minute off her time from Brighton in 2015. Jane said: “Really can’t say enough about how incredible the support was from the GVH yesterday. So many turned out to support in horrible conditions.” 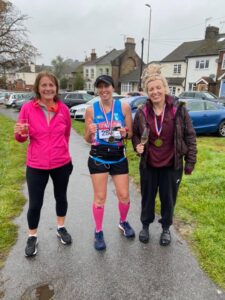 All smiles after the virtual marathon

Kelly Cox had joined the Harriers specifically with the target of improving her marathon PB of 5:14. In what has to be the personal performance of the weekend, she took nearly 40 minutes off her old mark by completing the distance in 4:35:35. 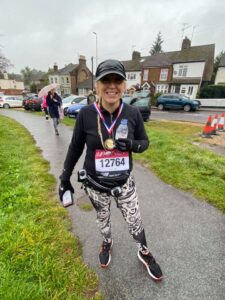 At the end of the Virtual marathon

Trevor Normoyle ran steadily through most of the race but struggled for 3 painful miles towards the end. His time of 3:38 was outside his PB but a great effort in the conditions. George Einchcomb also found the going tough in the second half of the run but still managed an impressive time of 4:05:43.

Cake for George after the virtual marathon 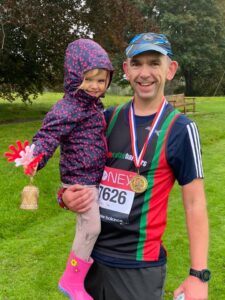 Trevor celebrates his achievement in the rain 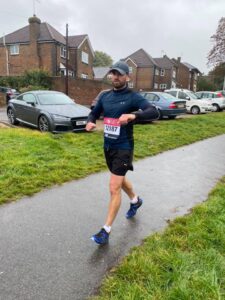 Finally, spare a thought for the legend of Dave. Some people are so well known that they only need one name. Madonna, Cher, Kylie, Pele and Ronaldo all hold this distinction. Dave is not one of those people but none of us knows his surname so we know him just as Dave. Dave has been a local runner “for ever” and is known to anybody who trains regularly at Jarman Park. Dave is rumoured to have competed in every London Marathon to date and was taking part in the virtual marathon, clocking up his 26.2 miles by running between the Magic roundabout and the top of Fishery Road. He was cheered on by the Harriers every time he passed the knot of hardy souls opposite the Steamcoach. Well done Dave, we salute your achievements, your lack of a surname and your incredible mane of hair.