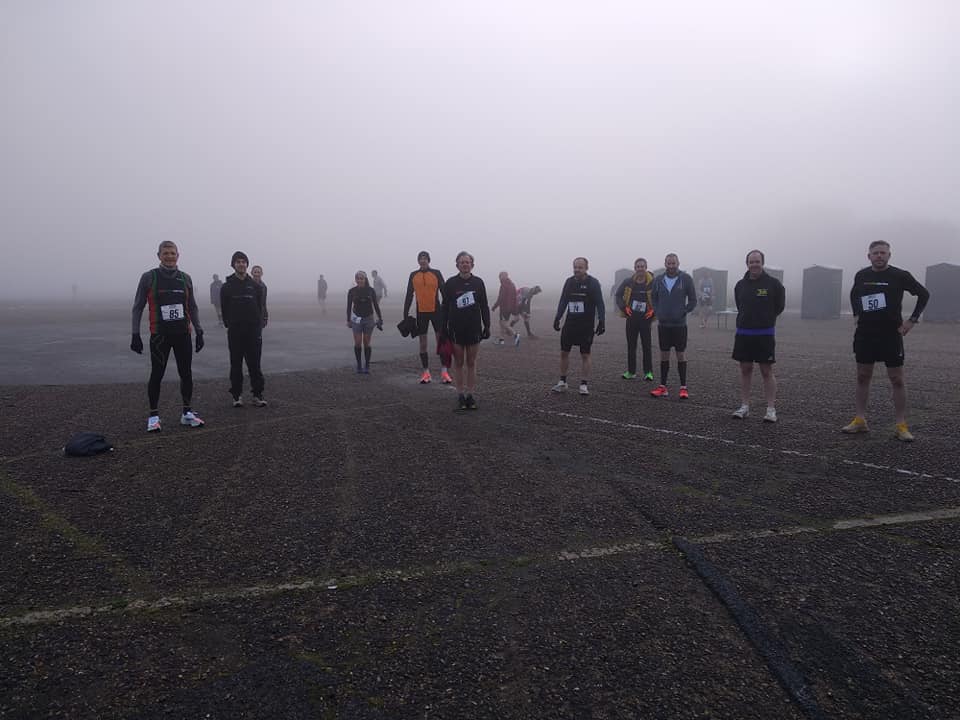 After Lockdown v1.0 and 1.1, a partial release and then Lockdown v2.0 organised racing finally got underway again at a freezing cold, foggy Bovingdon Airfield for the Herts Remembrance 10k. The race was originally scheduled for November 8th but the latest lockdown had grounded that plan leaving everybody frustrated but itching to go once the new date had been confirmed midweek.

For most of the Harriers this was their first race, barring virtual races, since before the first lockdown. The chance to run a “real” race again was more than most could resist and the turnout was huge by the normal standards of a local 10k race as 31 Harriers across all ages and abilities took part. It was relatively easy to gauge which Harriers had enjoyed a “good” lockdown and which Harriers had just had a good time in Lockdown as there were a spate of PBs whilst some of the team struggled.

Normally racers jostle for position at the start and race each other all the way to the finish line. Finishing positions are decided based purely on the order of crossing the finish line whilst modern chip based technology has long ensured that everybody is awarded an accurate “chip time” measured from when they crossed the start line to when they finished the race. In this time of social distancing, however, the race was started not only in two entirely separate waves, with the early group starting from 10:00 and the later group from 12:00, but within each wave the runners were set off in socially distanced groups of 6 every 20 seconds or so. 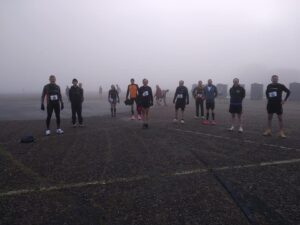 The spread out nature of the field together with the short, 2k, lap meant that the later starters were lapped early in the race by the absurdly quick leaders. For many of the Harriers being lapped at all was a novel experience but being lapped only 2k into a 10k race was a distinctly surreal feeling. Matt Watt and Chris Dowling were not amongst those to be lapped early on in the race as both excelled with new PBs. Watt trimmed a minute off his previous best to cross the finish line first in 36:04 whilst Chris Dowling took a frankly obscene 2:15 from his previous best to record a time of 36:16. Watt and Dowling second and third respectively in the V40 age category.

Next for the Harriers was Matt Ashby in a very quick 38:00 but he became the first Harrier home to have missed the memo about personal bests. Stuart Gallagher, Phil Mercer, Gareth Tucker and Steve Newing were next. All four beat their previous bests and all four broke the 40 minute barrier for the 10k for the first time. 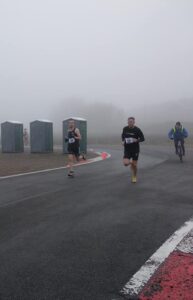 Ahsby and Gallagher about to be lapped!

Club chairman Andy Cook also managed a new PB, just missing the magic 40 minute mark, finishing in 40:06. Andy spent the last km or so chasing James Birnie hard to try to beat him to the finish line. He didn’t manage to catch Birnie but is listed ahead in the results because of the Covid rules. Both credited the proximity of the other for finding a little bit of extra speed in the vital last 500 metres. Dave Goodman was next, he started very quickly, keeping pace with Phil Mercer and James Birnie for most of the first lap having started in the same group but then surprisingly faded in the latter part of the race to finish about 2 minutes behind Birnie.

Nicoletta Charalambous and Robert Bowler started together and ran together for about half the distance before Nico pulled away from her clubmate to finish as 4th lady overall and take just under a minute off her PB, finishing the distance in a highly impressive 43:23. Finishing a few seconds behind Bowler was Lisa Newing. She was followed by Kim Morgan who took a massive 5 minutes from her PB in what was probably the performance of the day, to finish in 44:35. Vicky Taylor also broke the 45 minute mark, finishing just behind Kim in 44:59. 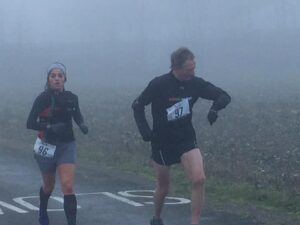 Bowler Wonders Why Nico was late…?

Sam Rafferty finished just 20 seconds ahead of Mel Hardy, albeit crossing the line a full 2 hours after Hardy due to the unusual arrangements. Both recorded new PBs. Natasha Gibbs and Susannah Crowther also clocked new PBs, both ducking under 50 minutes for the first time. To go with her new PB, Crowther also finished third in the W50 category. Ashleigh Taylor, Helen Cook, Kelly Cox and Adrian Stobie were next home with Cox jumping on the PB bandwagon. Finishing just behind Martin Storrie and Angeline Cottrill, Chris Howe became the next Harrier to better his previous best.

Mary McCluskey and Nicole Tucker spent most of the race in close proximity but they were separated when Tucker slipped and fell at the start of the final lap. She managed to pick herself up and finish the race in just over the hour, bagging herself a new PB, third place in the W60 category and a blood stained vest in the process. Tracy Scollin, Jenny Plastow, Peter Tucker and Ines Trent were the last Harriers to finish the course with Jenny and Ines rounding off the list of new PBs.