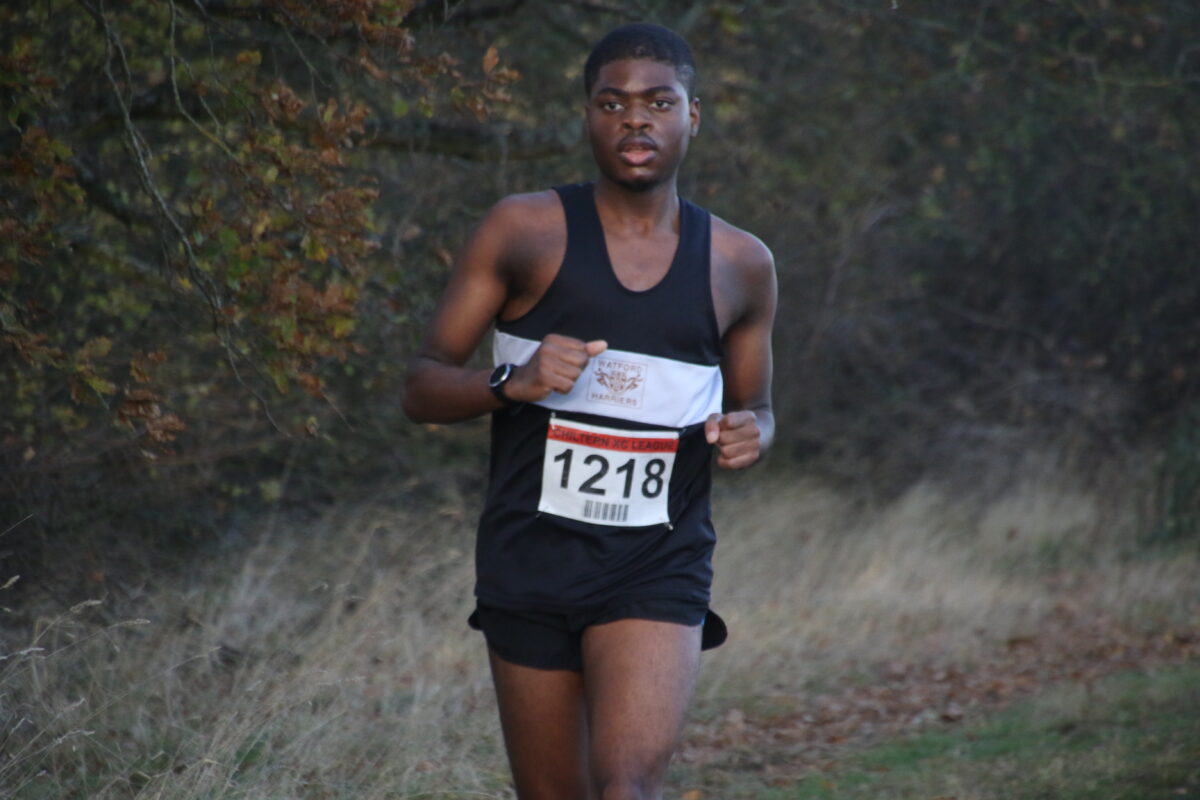 Last weekend saw round 3 of the Chiltern Cross Country League with 21 Harriers, 12 men and 9 women, taking part in the race at Stopsley Common near Luton as the Harriers continued their bid to be promoted back to division one of the league.

The cross country leagues tend to thin the field at the local Parkruns as many people who would normally take part rest before the race in the afternoon. As such there were far fewer GVH athletes than is usually the case taking on the 5k courses.

Jono Marval was happy to take advantage of the age old maxim that “it isn’t your fault if the faster runners don’t turn up”. He put in a strong performance in the wet conditions, finishing the challenging 5k at Gadebridge Park in 22:14 to bank a third place finish.

Parkrun tourists of the week were Chairman Andy Cook and his wife, club secretary Helen Cook who took part in Cirencester Parkrun. Andy put in a strong performance, finishing in 11th overall place and first in his age category, in 22:53 while Helen made it a double for the family as she finished in 28:59, also first in her age category.

The main event of the weekend was, however, the cross country races. GVH were in third place in division 2 after the opening 2 fixtures. Oxford City led the division with 3070 points from Northampton (2696), with GVH on 2578 just ahead of Ampthill and Flitwick Flyers (2506). 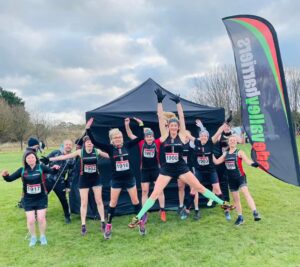 Ange star jumps, Tracey balances on one leg, Tracey-Ann does nothing and Vic clothes-lines Phil

Much of the talk leading up to the weekend’s fixture was around how Oxford City AC have historically scored big points in the opening fixture in Oxford, effectively a home tie, and then faded away over the subsequent fixtures, with the matches in Bedfordshire proving particularly problematic for them. The Harriers knew, therefore, that if they could put in a strong performance that they would stand a chance of leapfrogging Oxford into the promotion places. Despite some late drop outs owing to unexpected Omicron isolation, GVH felt they had a strong enough team to do what was needed on the day. 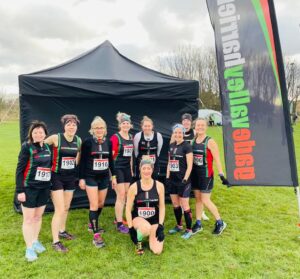 The women’s race was first off and Teresa Reason showed her enduring class to finish first for the Harriers, 17th overall. Vicky Crawley Wise was next for GVH, 10 places and just under 2 minutes further back. Claire McDonell, Sue Crowther and Tracey Cotton finished within 45 seconds of each other in 37th, 40th and 43rd places, respectively, to complete the scoring 5 for Gade Valley. 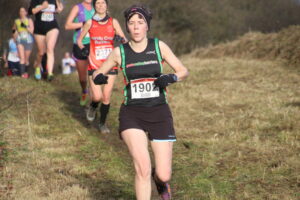 Thank God for Oxon-Races! You can’t rely on the men to take any action pics!

Ashleigh Taylor had completed the first lap ahead of Claire, Sue and Tracey but found the pace too strong in the second, much longer, lap and slipped down the field to finish in a still very respectable 49th overall. Kitty Cole, captain Angeline Cottrill and Tracy Ann Scolin completed the GVH team.

The GVH men, despite missing John Roberts, looked as strong as they had all season. Matt Watt has enjoyed his longest injury free period for several years, Matt Ashby seems to be entering his peak years and several others, notably Michael Linden, club captain Andy Wells, Gareth Tucker and Nick Crowther, seem to be running as quickly as they ever have. 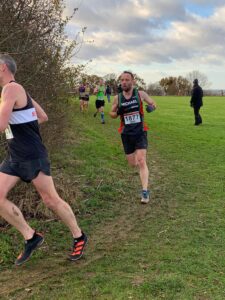 I can’t see them, but I think Matt is winning!

Watt, Ashby and Linden were in fairly close contact after the first, short, lap but Linden was feeling the pace. He said after the race that “they were just too quick for me. I could see them, they weren’t disappearing into the distance, but I couldn’t get any closer. I lost sight of them in the last mile, when we went into the farmer’s field. I think Matt was just ahead at that point.” Given that Matt Ashby and Matt Watt are both called Matt, that was a safe bet. In fact Matt Ashby pulled away from Matt Watt in that last mile. Ashby finished 13th, 17 seconds and 2 places ahead of Watt, with Linden a further 50 seconds back in 22nd place. 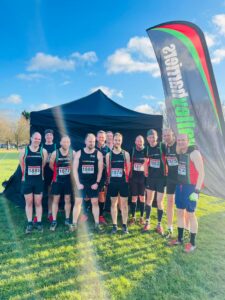 Nick Crowther was next home for GVH in 30th place followed by Garether Tucker just over 90 seconds further back in 41st position. Just over 30 seconds separated the last three scorers for the men’s team. Captain Andy Wells finished in 52nd place with Phil Heaton in 54th and James Birnie in 56th. James commented after the race that “Phil ran past me halfway round the last lap. I was surprised to see him. Fair play, he looked really strong. I tried to stay with him but I couldn’t. Great running.” 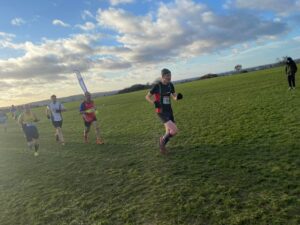 Steve Newing had kept within sight of Birnie and Heaton for the whole race and finished just over 30 seconds later. Head coach Ed Price was next a further 30 seconds behind while Phil Mercer, still recovering from his ultra marathon efforts in October and Merlin Allan Completed the GVH team. Merlin finished 4th in the V60 category, leaving him well placed to pick up individual honours at the end of the season after 3 strong finishes.

GVH club legend Simeon Beckford-Tongs was also competing at Luton. Having once been quick enough to elbow Gareth Tucker out of the way on the line and then celebrate as if having won an Olympic gold medal, SJBT (as his friends call him) has in recent years been concentrating on his modelling and influencing careers. Although he won most people’s vote for the best looking model and influencer at the event, his running form needs some work. He was disappointed with his time of 48:55, placing him nearly two minutes behind GVH’s last finisher, but he did score points as 9th finisher for Watford Harriers in the top division. SJBT was unavailable for comment after the race although Gareth Tucker confirmed that there was a rumour that he had to leave urgently to influence the Christmas market that was underway just down the road from Stopsley common. 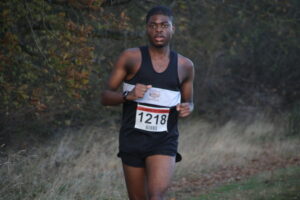 Model, influencer, Legend. Great for a barbecue, not so good at running.

As far as the promotion push goes, it was something of a Curate’s Egg of a day for GVH. As anticipated Oxford City AC’s return from the fixture diminished markedly. They only collected 440 points to Gade Valley’s 1022 and GVH duly went 90 points clear of Oxford. What wasn’t anticipated was Ampthill and Flitwick Flyers raising their game sufficiently to bank 1130 points to sneak above GVH into second place in the table. It all seems set up well for the final two rounds in January and February.

On Sunday Robert Bowler was looking to start his acquisition of the vacant V60 club records, having recently enjoyed his 60th birthday. A few weeks ago Martin Storrie had beaten Robert Bowler to be the first to claim the V60 10k record after Robert had been injured. After regaining fitness he was looking forward to setting the bar for the 5 mile distance in North West London at the Perivale 5. 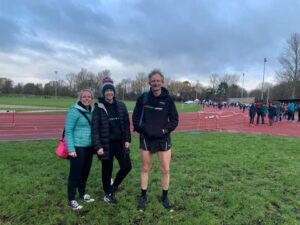 Leg one of my tour of unclaimed V60 records!

Robert ran the race alongside Kim Morgan, who was seeking a PB and they were joined on the start line by Sam Raffety and Trevor Normoyle. Trevor Normoyle was first home for the Harriers, finishing in 87th position in 35:34.

Bowler and Morgan finished the race in 91st and 93rd place respectively, with the same time, 35:45. It isn’t clear whether another athlete came between them or whether the computer said “no” or whatever it is that computers say when they make decisions based on chip times, race numbers and Covid variants. Robert’s time was good enough to set a new club V60 record for the distance while Kim claimed a new PB. Sam Raffety also claimed a new PB, finishing in 38:04, 6th in her age category.