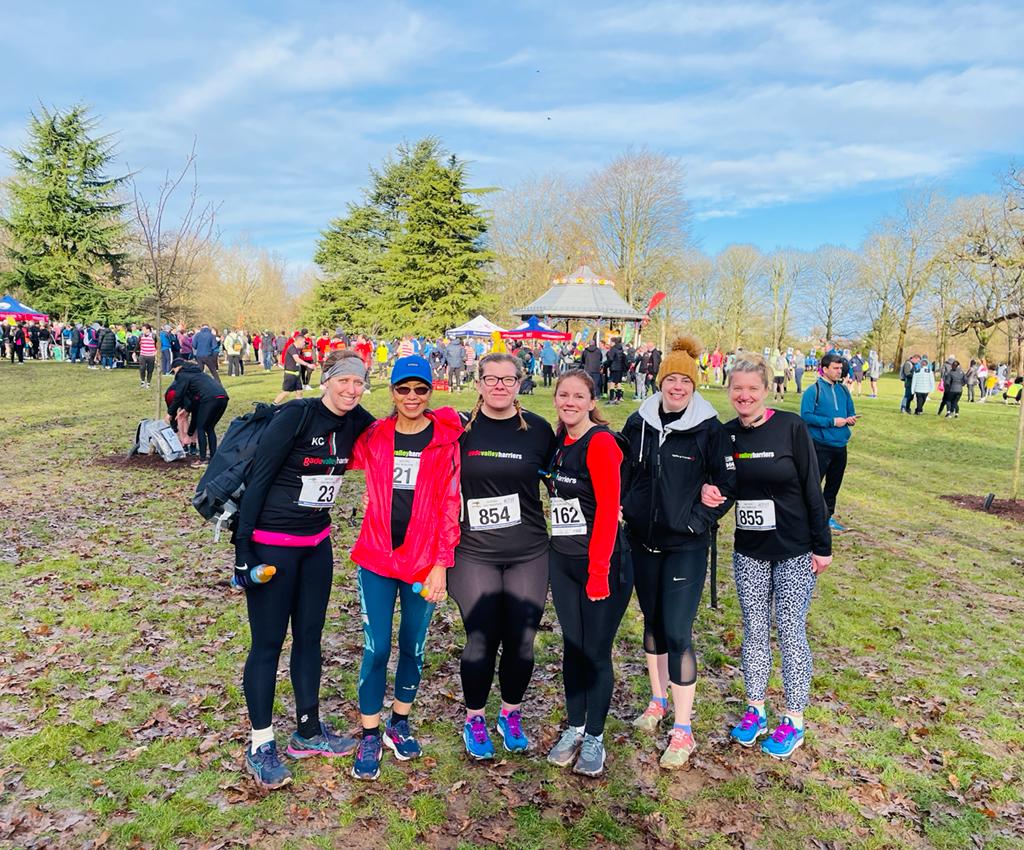 After a quiet weekend with no races at the end of January, 15 Gade Valley Harriers returned to racing action as the Watford Half Marathon made a welcome return to the calendar on Sunday having been cancelled due to Covid last year.

On Saturday there was the usual round of Parkruns. Vince Ellerby made his weekly visit to Black Park, 9 Harriers attended the local parkrun in Gadebridge Park and 7 Harriers made the trip to Rickmansworth for a less hilly and less muddy assignment. Merlin Allan pulled out the performance of the day, finishing the tough Gadebridge course in 22:58, comfortably first in his age category, a full 7 minutes ahead of the next runner in his group. Kim Morgan turned in the best performance at Rickmansworth, finishing 10th out of 191 female runners in a new PB of 22:48.

The Watford Half Marathon course is a notoriously tough, but scenic, test as it climbs away from the start in Cassiobury Park through Bucks Hill and Commonwood, looping back over the M25, through Chandler’s Cross and Whippendell Woods, before a final lap of Cassiobury Park. The weather often plays a part in the Watford race and this year was no exception as heavy rain had flooded parts of the course forcing the runners to run most of the course with freezing cold, wet, feet. 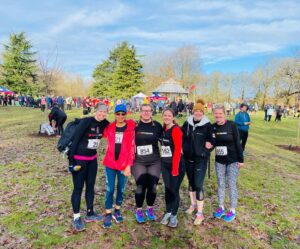 Not wet yet, enjoy it while you can

In a change from previous years, the steep climb up the aptly named Deadman’s Ash Lane after about 7 miles has been removed from the course, presumably at the behest of the landowner through whose private land the previous course passed, to be replaced by an “easier” route along the more amusingly named Bottom Lane. Despite the removal of this notorious hill, at least if this writer’s Strava feed is to be believed, the total amount of climbing slightly increased on the older route. 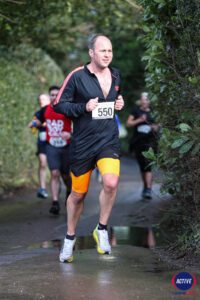 One Harrier who found the conditions if not to his liking, at least tolerable, was Michael Linden. He commented after the race that “I didn’t look at my watch. I felt terrible, I just thought if I ran I might make it to the end OK.” He did far better than OK as he completed the course 35th out of 1085 finishers in a superb new personal best time of 1:21:32, taking around 4 minutes off his previous mark. 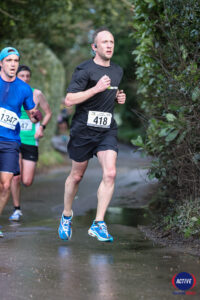 Floating up the hill at 15k

Steve Newing and James Birnie enjoyed a battle royal over the 13 mile course. James led from Steve in the early stages but Steve overtook James on the first uphill stretch away from Cassiobury Park. A pattern was established as James took the lead on the way down to Bank Mill and then Steve went past him again on the ascent up towards Whippendell Woods. They continued to trade places, with James taking the lead on downhill sections and Steve going ahead on the uphills until the 11 mile mark. James said “I couldn’t quite catch him coming down the hill to the canal and then we went through an ankle deep puddle, I couldn’t get my legs moving again and I knew I wouldn’t catch him.” Steve finished 119th in 1:29:19, while James finished 7 places further back in 1:30:02. 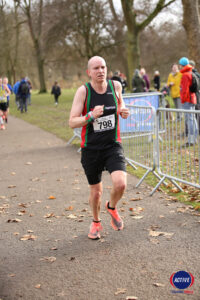 Everybody enjoys racing, as you can clearly see.

Phil Mercer finished next for the Harriers. His time of 1:34:29 was just outside his PB, a time that he will surely beat soon. James Felstead ran well to complete the course in 1:43:14 while Andy Bishop was pleased with his time of 1:46:33. Trevor Normoyle was also racing, under his first claim club, Met Police and he posted a solid time of 1:43:44. 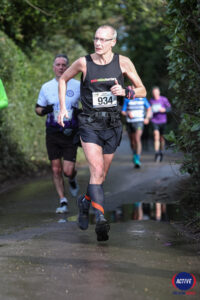 No, that isn’t where the camera is!

The performance of the day for the Harriers men has to go to Robert Bowler. Robert recently passed his 60th birthday and was determined to see the milestone as an opportunity to beat the existing club records for the V60 category and claim the records that have so far remained unclaimed in the history of the club. The Half Marathon record was just such a record so Robert was guaranteed to hold it if he finished the race. He did much better than just finish though, completing the tough course in 1:43:34 to finish 8th in his age category and deservedly claim the club’s V60 half marathon record. 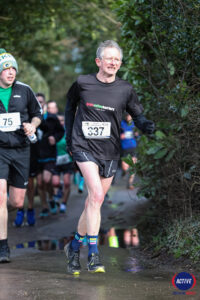 Heather Timmis was the first GVH lady to finish the course, although she was also not running under club colours as she was undertaking pacing duties. For her, a target time of 1:50:00 was very comfortable and she discharged her pacing duties perfectly, finishing the course in 1:50:02. Hot on Heather’s heels was Holly Beckett who was extremely happy to bag a new PB for herself. Her new mark is 1:56:40. Tracey Cotton and Ashleigh Taylor both finished the course just under the 2 hour mark.

Nikki Jackson was next home, also picking up a new PB in 2:08:45, just ahead of Kitty Cole and Priscilla Pathak. The last word goes to Ines Trent, who managed to conquer the course and the elements as she too managed a new best time. Her new mark is 2:36:37. Ines commented, rather modestly, that she “…managed to bag a PB too, by 1 minute and 1 second.” Superb running in challenging conditions well done to everybody, particularly those that managed a new PB. 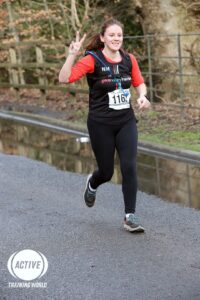 On her way to a new PB