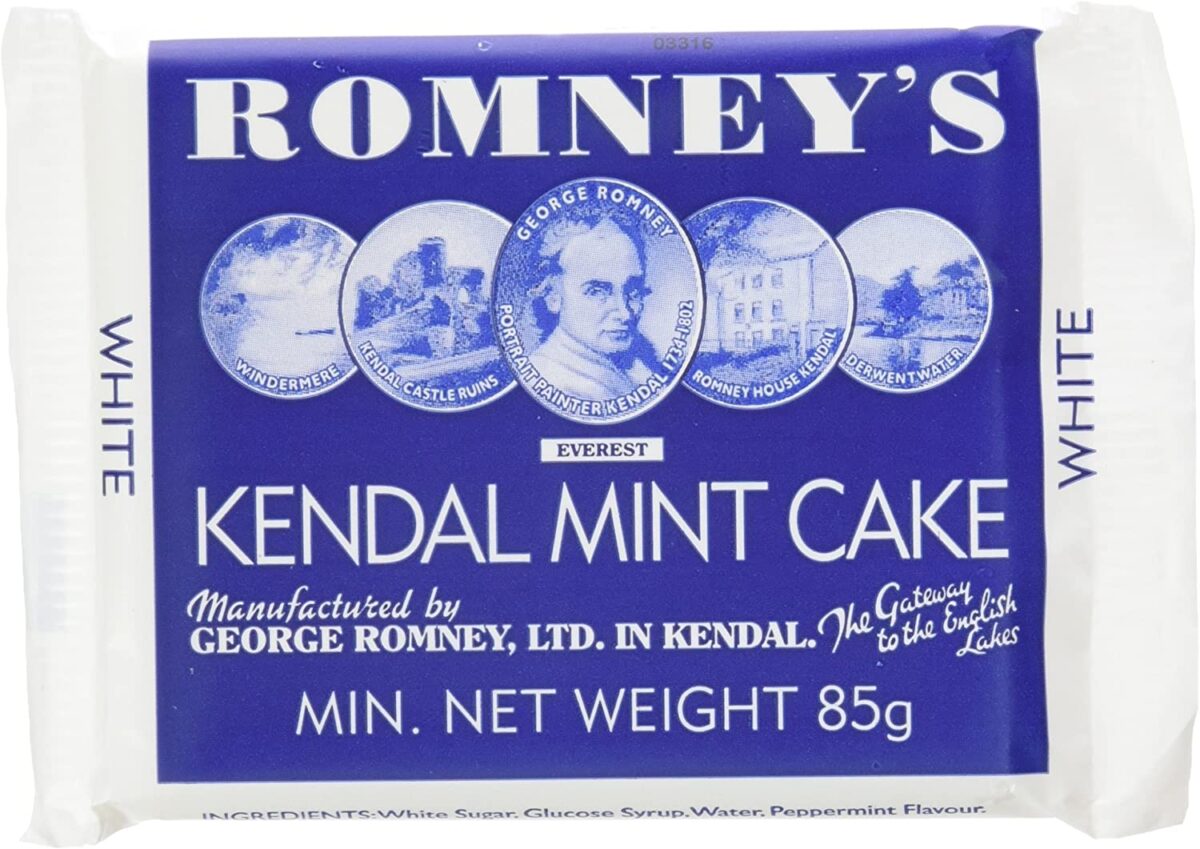 Last Thursday, 30th June, saw the third round of the GVH Summer Handicap Series. Attendance was a little bit down on the previous events, perhaps because of the weather forecast (chance of showers), or perhaps because the membership has become weary of being accused of being part of Kitty’s horse rustling gang. Reflecting the fact that most of the participants had already taken part this summer, thus removing their ability to underplay their speed to the handicap committee, nobody earned the full 5 bandit masks in June, although some came very close.

The latest entrants to the roll of dishonour of questionably quick handicap performances were led by Roland Kendal, closely followed by Molly Rice, Antony Beamish and Helen Cook. Roland took part in the first race, in April, clocking 34:00 exactly but didn’t run in May. Benefitting from a handicap based on that first time, and improving by 1:14, he earned 4 bandit masks with a rating of just under 9% overperformance on his expected finish time. Having missed a race it is feasible that Roland has been steadily improving under the radar but the talk in the bar mainly concerned expert concealment of improving performance. 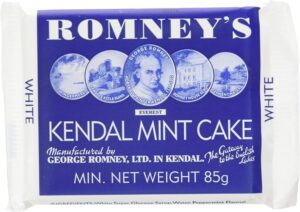 Quite fresh but won’t circle its wagons around your homestead

Molly can’t be accused of going under the radar as her times in May and June showed steady improvement on the previous outing. She clearly trained well throughout June to improve to a finish time 34:06 from 35:12, and should be (genuinely) congratulated on earning second place and 4 masks.

In third place Antony Beamish should also be congratulated for concealing his true pace from the committee. By blaming his well documented ineptitude on all things social media (and technology in general) and not entering the handicap beforehand, thus forcing the committee to make a snap decision based on good faith, he clocked a superb time of 25:26 to finish 3rd. He missed out on the badge of dishonour of the full 5 bandit masks by under 0.03%, or less than a second. One can only congratulate him on his ability to time his run to absolute perfection.

In fourth place Helen Cook executed what can only be described as the perfect sandbagging operation. Helen didn’t take part in April and in May, instead of running at her own pace, elected to keep a friend company throughout the four miles. Thus she underperformed her own handicap drastically and earned a very generous handicap for June which she duly outperformed handsomely.

Other notable performances came from Tom Perry, who improved his previous time by 30 seconds, Stu Gallagher, running his first handicap of the year after a long period of injury and rehabilitation, Matt Watt, who ran the fastest male time, 24:04 and Naomi Carey, fastest female at 32:19, and also one of the more honest handicap declarations, earning only 2 masks.

At the other end of the Bandit scale, Sam Raffety, running her first handicap of the year, earned only one mask for underperforming against her expected time. Bill Hawes, running his second handicap after 2 months of struggling with a back injury, was over a minute and a half behind his April time to also underperform his handicap. Finally Handicap-Moaner-in-Chief, James Birnie, after negotiating hard (and succeeding) in getting his handicap down to what he felt was a good level found that two months struggling with an ankle injury had left him even slower than he realised and he duly trailed in in last place, almost a minute behind Bill on the road. Maybe he can look forward to an even more generous start time in July.

On Saturday 25 Harriers took to various Parkruns around the local area and beyond. Vince and Lewis Ellerby could be found at their usual haunt of Black Park, 7 Harriers were at Rickmansworth where Matt Watt clocked an impressive 17:49 for the Harrier men and Helen Cook was the first GVH female to finish and 5 GVH men enjoyed the local Gadebridge Parkrun led home again by Jono Marval. Over at Dunstable Downs Tom Langdown continued his quiet progress back to full fitness as he ran the hilly 5k in under 20 minutes for the first and bagged his 4th consecutive personal record for the Dunstable course. 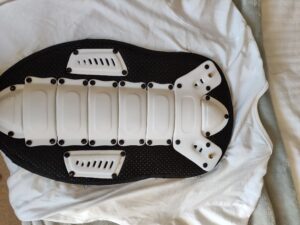 Can you guess what it is yet?

Also on Saturday 2nd July, starting just after 6:00AM, Teresa Reason further enhanced GVH’s reputation for excellence in ultra marathon running, at the Serpent 100k race. According to its own website, The Serpent Trail “is a 100k long-distance trail through some of the most breathtaking countryside in the South East of ancient woodlands, greensand ridges and protected heath in the South Downs National Park.” I’m unclear if greensand is a typo and should have said “…woodlands, greens and ridges…” or whether it is, in fact, a thing that one experiences on trails that run through the South East of ancient woodlands. A quick Wikipedia check tells us that greensand (or green sand) is a type of sand. Who knew? 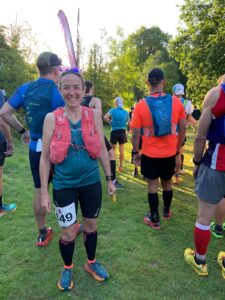 Looking happy at the start of 100k

Whether or not Teresa spent her day marvelling at the local geology and having her breath taken by the countryside is unknown to me at the time of writing. What is known to me (because I’m up there with Helen Terry when it comes to Strava stalking) is that Teresa finished 13th overall, 3rd female, out of 135 finishers, and a further 30 who didn’t finish the 100k distance. She also bagged a new 100k PB into the bargain. Well done Teresa, we are all looking forward to your next ultra-adventure. 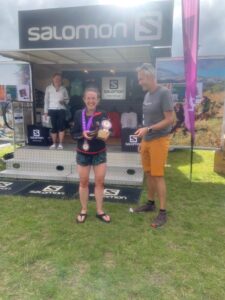 And looking remarkably pukka at the end too!