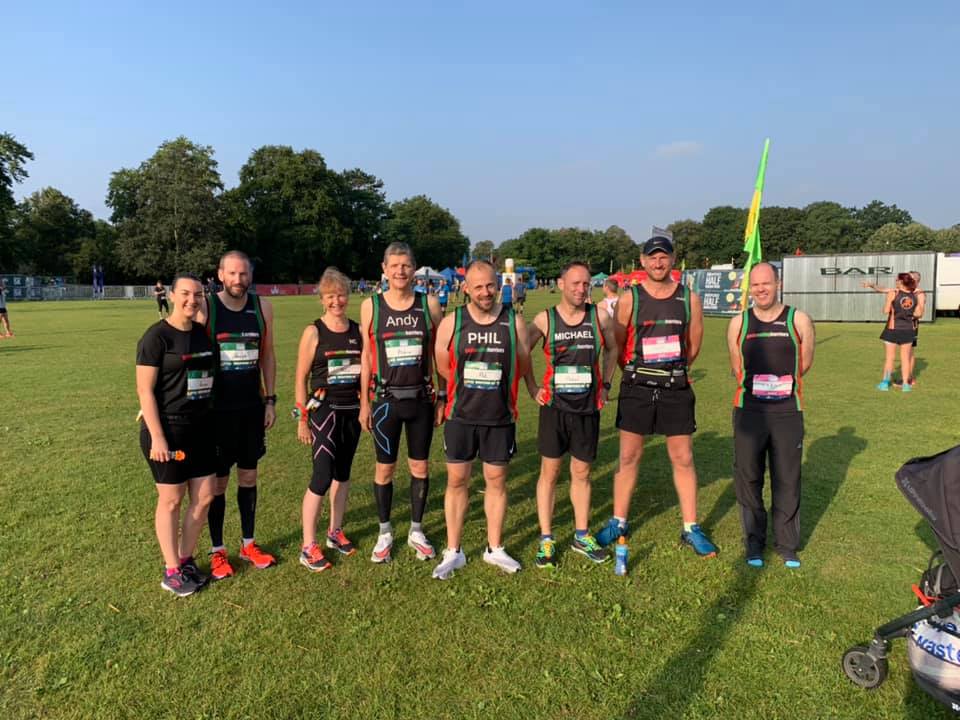 The weekend of 4th and 5th September saw a lot of Gade Valley Harriers in action over a variety of distances.

As always, the weekend kicked off with various athletes taking on various Parkruns around the local area and in the wider country. This Saturday around 30 Harriers take on the 5k runs at 9 different Parkruns. The performance of the week was put in by Kirstie Hardiman who finished as 2nd overall female, just 6 seconds outside her PB, at the local Gadebridge Parkrun. Elsewhere, Nick Crowther put in another extremely strong performance, finishing 4th overall out of 420 finishers in a new PB time of 18:21 at Cassiobury Park in Watford.

There were several different races involving Gade Valley Harriers over the weekend. There were two 10k races, two (and a half) half marathons, two 20 mile races, a marathon, an Aquathlon and, for a brief period, one of the fastest times recorded by any athlete in the world over 20 miles.

It was probably no surprise that Dave Goodman managed to take part in two more races over the weekend proper. Saturday morning saw Dave competing at the Richmond Park Half Marathon. This race took place over four laps around Richmond Park, dodging the deer and enjoying the views over West London. He ran strongly to finish 16th overall and 1st in his age category in a time of 1:33:36. 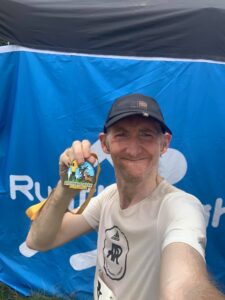 Sunday morning saw Dave Goodman join 10 other Gade Valley Harriers on the start line for a popular local race, the Bovingdon 10k. This race was one of many that didn’t take place in 2020 so it was great to see it return to the calendar. After the race Dave said, “A nice little turn out today at the Bovingdon 10km this morning. It’s been a while since I’ve put on the GVH vest [in fact, a whole day]. My time was 42:19, so very happy considering yesterday’s effort”.

Leading the Harriers home at Bovingdon was Matt Ashby. He finished a superb 6th overall in a time of 38:59. Phil Heaton made it two Harriers in the top 10, finishing 9th overall in 40:40. Merlin Allan, Andrew Bishop and Andrew Watt were next before Jenny Stubberfield was the first Harrier lady to finish in 56th position overall in just over 50 minutes, with Dan Green a further 7 seconds behind. Isabel Wilson ran strongly again to finish in 52:29, in 70th position. There is a good chance she won her age category but at the time of writing the official results didn’t include Isabel’s category. Rupert Mainwaring and Angeline Cottrill were also representing Gade Valley. 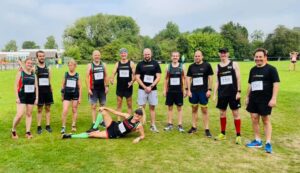 The Harriers at the Bovingdon 10k

A little further afield, Kim Morgan and Ines Trent ran together in the confusingly named “London Summer / Winter 10k”. This is a race organised by Cancer Research UK and normally takes place in the winter. As with many races, it had to be postponed during the winter and was rescheduled for the late summer or early autumn, so went with the strange name this year. Having scored two PBs in recent weeks over the half marathon distance Ines was optimistic of a 10k PB this time out. She just missed out though, saying, “…no PB sadly. The amount of people at the start made it difficult to take off at a reasonable pace. The heat got to me too but I thoroughly enjoyed this fun run and Kim’s company. Loads of performers, singers and spectators made it very special. It’s also the first race I got two medals for: one for completion of the race and the second for fundraising.” 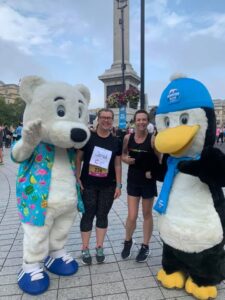 Al Flowers enjoys taking on races slightly away from the conventional. He has completed ultra marathons, duathlons, triathlons, various trail races and water scrambling affairs. He is rarely seen at “normal” road races and he didn’t disappoint this weekend. This time it was the “Letchworth Duck ‘n’ Dash Aquathlon”. This race is, we were told, “a 400m outdoor pool swim (in a 50m pool), followed by a 5km mixed terrain run around the park”. Clearly the unusual format was to Al’s liking as he finished 3rd overall and scooped a very handsome medal for finishing first in his age category. 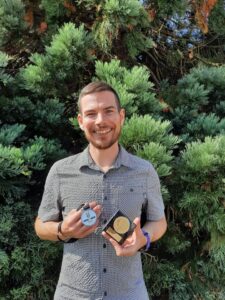 The pandemic wiped out most marathons in 2020 and in spring 2021. The main big city marathons, including London, Brighton and Manchester, were postponed initially from April 2020, then October 2020 and April 2021. Those marathons, which account for the majority of marathon competitors in any given year, are now scheduled to take place in October. One of the knock on effects has been that the 20 mile races, a distance only really raced in preparation for marathons, which normally take place in March had been hastily rearranged to September. Two such races took place on Sunday, in Milton Keynes and Bedford, with Gade Valley representation at both.

Three Harrier women made the trip to Milton Keynes. Ciara Barry led them home with a solid performance, clocking 3:32:20 to finish in 417th position. Not far behind were Holly Beckett and Sam Sparks, running together to finish the race in 428th and 429th position, respectively, with the same time of 3:35:52. Sam and Holly “celebrated in style” according to Sam, as they were pictured eating burgers while still wearing their running kit. Sam later added “I enjoyed that burger so much I have Mayo on the side of my mouth in this pic!” 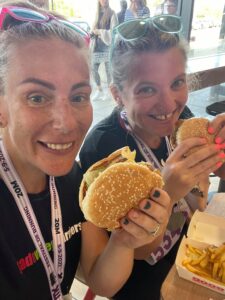 “We run to be able to eat like this”, said nobody, ever.

Twelve Gade Valley athletes took on the 20 mile course at Bedford as part of the Bedford running festival in which 4 different races take place simultaneously around Russell Park near the town centre. Michael Linden was first to finish in an impressive 2:18:11, beating his previous best time set at Hillingdon in 2020. Steve Newing was next, finishing the distance in 2:27:40, just ahead of Antony Beamish in 2:28:56.

There were two husband and wife pairs racing at Bedford. Andy Cook was the first home in 2:32:24 with wife Helen following in 3:08:44 for a new PB. Gareth Tucker finished in 2:36:23 with his wife Gemma completing the race in 4:09:38. Breaking his media ban, Gareth commented, “I also PB’ed at Bedford, 2:36:23”. Jono Marval, Tracey Cotton, Laura Johnson and Kirstie Hardiman were the other GVH runners to complete the 20 mile course. 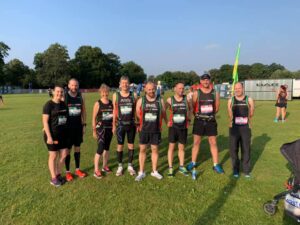 Mercer had to be pleased with his “time” as it was within 5 minutes of one of the longest standing World Records, Steve Jones having run 1:35:22 way back in October 1985. After the event, Andy Cook commented, “I think he always had that plan as he was keeping his options open. He said the organisers were fine with it and gave him the half medal; they just didn’t realise the IT trouble it would cause!” Mercer was unavailable for comment about his near miss on World Record glory.

Heather Taylor took on the Paddock Wood Half Marathon on Sunday morning and, unlike Phil Mercer, decided to register legitimately before the start. She was pleased with her performance as she finished 9th overall female and recorded a new PB of 1:28:29, a time which would be good enough to win many smaller events.

The final word of the weekend goes to Priscilla Pathak who proved that you don’t need to run your fastest time to enjoy yourself and appreciate a good race. She ran the Southampton Marathon on Sunday and completed the course in 5:20:38. Although it was, in her own words, “my 5th marathon, the slowest ever”, she still managed to finish 3rd in her age category. She continued, “I had to stop 3 times to catch my breath and recover from stomach ache”. She nearly gave up at 18 miles but ultimately, as is often the case, she was grateful to finish another marathon. She had a message for the crowd in Southampton, saying “thanks to the wonderful and kind residents for showering us with their hosepipes!” 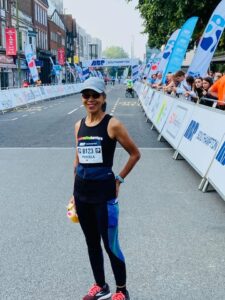 Priscilla enjoys the crowds in Southampton