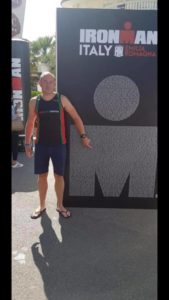 It’s with great pleasure that I present you with my first Member of the Month nomination and for September I have chosen Ironman, Dean Kidd. Dean took on his first full Ironman competing in Ironman Italy which was held in Cervia on the sunny east coast. His times are as follows : Swim 1:17:47 – Bike 5:36:41 – Run 4:48:05 totaling 11:55:51 (Inc transitions) with a total estimated burn of 5970 calories!
Although Dean’s race was in September I actually want to recognise the months of training that got him there. His dedication and commitment to his training was second to none, often getting in a long run first thing in the morning, sometimes heading out at 5am for 15 miles or riding a grueling turbo workout before work. His discipline didn’t end there but also extended to his road cycling where occasionally he would turn down joining a chatty Harriers group ride in favour of sticking to his plan specifics therefore cycling alone for 3 or 4 hours. Passing up a morning spent in lycra with Dylan, now that’s dedication!
I hope that Dean’s example is an inspiration of what can be achieved with committed training. It certainly is to me.
Well done Dean!