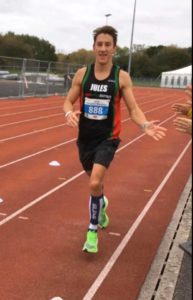 I’d like to award the men’s Member of the Month to that guy who ran an amazing 3:15 at the Abingdon Marathon with those cracking mile splits, but unfortunately I can’t remember his name so instead the pin up boy for October is – Julian Smith.

I’ve chosen Julian because not only did he run two super quick marathons in the month of October but he also achieved PB times at both races.

First Jules took on the Chester Marathon on Sunday the 6th October crossing the line in an eye watering 2:51:21 beating his previous marathon PB by three minutes and also picking up a 3rd team prize. Then with only 14 days for his legs to recover, he went up to Abingdon to race another 26.2 miles on Sunday the 20th. This time he was accompanied by nine of his Harrier team mates but none of them were a match for his blistering speed in this race as he broke his two week old PB by completing his second October marathon in 2:48:39 finishing 32nd overall (and beating me by over twenty seven minutes!)

I’d like to add that just 7 days prior to the 1st October marathon, Jules ran the Barnstaple Half Marathon on the 29th of September in another incredible time of 1:20:59 coming in 9th overall and yes, it was another PB.

Jules, you are an incredible athlete and a more than worthy winner of October’s Member of the Month. Congratulations!