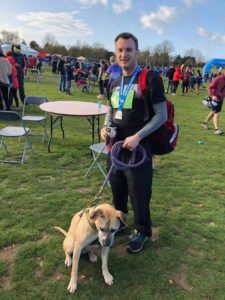 It is with great pleasure that I award Novembers Member of the Month to George Einchcomb. George joined GVH only in June of this year but in that short time he has made a big impact amongst the other members, he quickly became a regular attendee to both the Tuesday and Thursday club sessions and has since shown consistent improvement. In September he ran 5km in under twenty five minutes at Rickmansworth on only his second Parkrun just a week before tackling the hot and hilly Shardeloes 10Km, completing the off road course in under and hour and just recently he competed in the Milton Keynes Winter Half Marathon finishing in a very respectable 1:51:34.

George’s love for running has taken him along the path to become a Coach in Running Fitness and has expertly lead some interval sessions at the club as part of his course, he’s also been using his coaching knowledge to support the other runners in his group during the Thursday tempo runs often giving encouragement to anyone at the tail of the group. He is currently house hunting for a move to Scotland (I hope you love hills as much a I do!) where he intends to carry on coaching and helping more runners achieve their goals so unfortunately he may be leaving us soon but in the meantime I hope we can expect more of the same from George. All the best with your coaching future George, you’ll be fantastic! ?‍♂??

Well done Mr Motivator and congratulations on being Novembers Member of the Month. ??