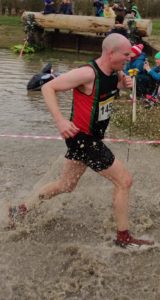 The Boys’ Member of the Month for January has been a GVH member for about 4 years and is a seasoned runner who has some amazing performances under his belt, amongst which are an 84 minute half and a fantastic sub 3 hour marathon just back in 2017 at London, official time of 2:58:23. Modest he is though and he doesn’t like to talk about this marathon and when asked he shies away from the conversation ?

After a less impressive spell, due to a back injury picked up when snowboarding, he has had recent return to previous form and ran a solid 88 minutes exactly around the tough and hilly Hertfordshire Half course in late November ’19, a race I love and know very well. This gritty performance was good enough to earn him a cracking 44th place overall and 4th placed V45. (and a sweaty finish line man hug from me)

January this year saw him race in the St Albans Striders Fred Hughes 10, finishing this 10 miler in 1:04:10 and although this wasn’t a PB at this distance, I’m sure you’ll all agree, is a super quick time. He has also been a Cross Country regular, scoring valuable points for the club and when choosing not to race has come along to support and take photos of those who were running.

If you haven’t already guessed, James Birnie is the Boys’ Member of the Month for January. Congratulations James, keep working hard buddy and good luck with your next sub 3 at Manchester. Hopefully you can tell us all about it ?