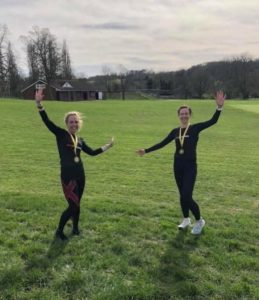 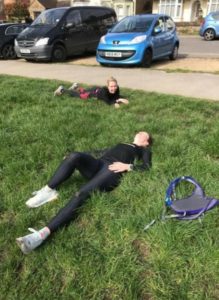 For March there are two winners of the ladies’ Member of the Month award and they are… Kim Morgan and Sam Raffety!
Kim had a place for VLM on April 26th and Sam had entered Manchester Marathon scheduled for April 5th, and their training had been intense and fruitful. It was due to be the first marathon for both of them. We all know what happened next! The timing couldn’t have been worse as they were at the peak of their training when the marathons were cancelled. Now, anyone that knows these two ladies knows that they have determination and strength beyond belief, both mentally and physically. Kicking off on 1st March, Kim took part in the Berko half and smashed out a PB of 1:42:58 with cracking consistent pace throughout and really shining on the last mile downhill to the finish line and to glory. A week later Kim took on the Hillingdon 20 and completed the four laps of 5 miles in a fantastic time of 2:52:00, giving her a good insight to her forthcoming marathon capability. Sam started the month on the 1st of March with a 20 mile training run, accompanied by Laura for 13.1, which she finished in a speedy 3:03 with a pit stop en route to support the Berko racers. The following weekend Sam packed her bags for Disneyland Paris for a family break but didn’t let Mickey Mouse stop her training! Both mornings of the weekend she was there, Sam got up at the crack of dawn to run 10k around Lac Disney, keeping her fitness at peak. Such commitment is beyond admirable. The following week she completed a 22 mile run in 3:19, again giving a great indication of her marathon ability. Now our super warriors were ready for a marathon challenge but with with nowhere to go!
Move over Gangnam style, let me tell you about “KimSam” style. Our supergirls decided to arrange the inaugural “Hemel Hempstead Marathon“! Their race took place on 21st of March just before the lockdown so excellent timing there! The route consisted of several laps, starting and finishing at the clubhouse. They had support from fellow clubmates Helen, Alice, Natasha and Isabel who cheered and provided water to our troopers. With amazing determination and focus, Kim crossed the virtual finish line 3:49, 21 and Sam shortly after in 3:55:42. They were greeted by their families, well deserved medals, and a soft patch of grass to collapse on!
Running a marathon is always a difficult challenge physically and mentally but the support of crowds often gives us the adrenaline and the determination to keep going. Without those in place I am absolutely in awe of what Kim and Sam have both achieved. Their finish times are incredible, not least because of the circumstances and being their first marathons.
Ladies, you are an inspiration and you’re both superb runners.
Congratulations on your worthy achievement of this accolade. Much love ??