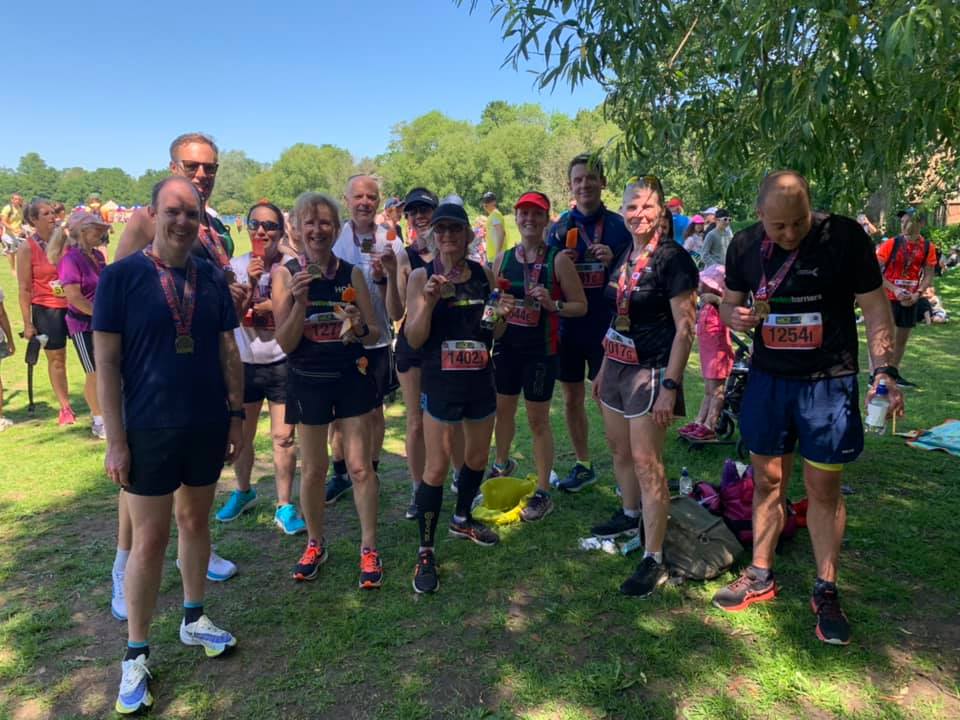 The slow return to the natural rhythm of the running seasons rolled on as another favourite local race, the St Albans Half Marathon, made a welcome return on 13th June after being cancelled last year because of something to do with a planned medic. At least I think that is what it was, nobody seems to remember much about 2020.

The St Albans Half always takes place in June with a relatively late start time of 10:00AM. This almost guarantees that most runners will finish the race in fierce midday heat. With little or no shade in the closing stages as the race comes back to St Albans to finish in Verulam Park it can make for challenging conditions. Given the hot conditions it is odds on that most runners would have been very much looking forward to the ice lolly that each runner receives at the end along with the medal. 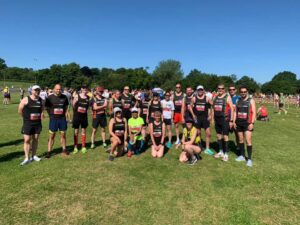 There was a big turnout in St Albans for the Harriers

Michael Linden made light of the difficult conditions as he was first to finish of the 30 Harriers who took on the course. He finished in 39th place overall, 11th in his age category in 1:26:53. Stu Gallagher was a further 8 places back, finishing in 1:28:20. Whilst neither troubled their best half marathon time, both were pleased with their result given the harsh conditions and the lack of race practice that every runner has endured over the past 16 months or so. 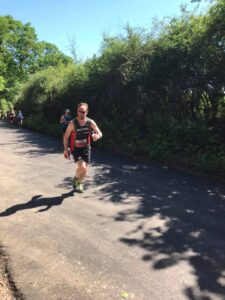 Club chairman Andy Cook was using the race as the first training run in the 18 week build up to the Manchester Marathon. He was aiming to run the race at his marathon race pace. Steve Newing paced Andy for much of the race before pulling ahead in the closing stages to finish in 1:34:06, just ahead of Cook who finished well ahead of his target time in 1:34:23. After the race, whilst enjoying his ice lolly, Andy declared that “everyone’s a winner on a day like today”. 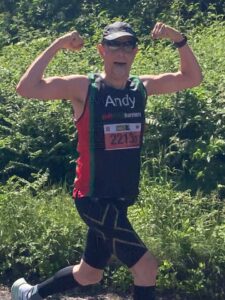 Andy Cook poses for the camera

Dave Goodman, Robert Bowler, Phil Mercer and Marc Burne all finished within three minutes of each other. Robert, competing in his second consecutive half marathon having taken on the Hertfordshire Half last week, said he was “disappointed not to break 1:40 but just pleased to finish in this weather.” He rather conservatively opted for the orange flavoured lolly at the finish. Marc Burne was competing as a Harrier for the first time in over two years having taken a break from running firstly because of becoming a father and latterly because everybody took a break from racing last year. He was pleased to complete the race in 1:42:00 in “Really tough, hot conditions. Just in time to support England!”

Trevor Normoyle and Paul Williams were the next Harriers to finish, Trevor just beating the 1:45 mark with Paul just failing to pass under 1:45. Andrew Watt was next, just ahead of Roly Kendall, Skip Phillips and Simon Wheeler. Andrew Watt (pictured below with his orange lolly) said “In January it seemed a good idea to enter the ice lolly half marathon for today – probably the hottest day of the year! My aim was to get round in under 2 hours (achieved 1 hr 51) really pleased and shows my fitness is not as bad as thought. I enjoyed the run with fantastic support in very hot conditions!” 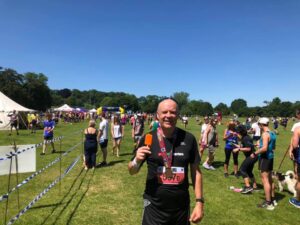 Tracy Cotton was the first female Harrier to finish the race in 1:55:11, just ahead of Vicky Crawley Wise in 1:55:48. They headed a group of 7 Harriers to finish within 3 minutes of each other with Andy Bishop (running in the Harriers colours for the first time in nearly 3 years), Claire McDonnell, Susanah Crowther, Natasha Gibbs and Helen Cook all coming in under the two hours mark. Vicky was disappointed that there was no lemon flavoured option at the end and was forced to settle for what she considered to be a disappointing orange. 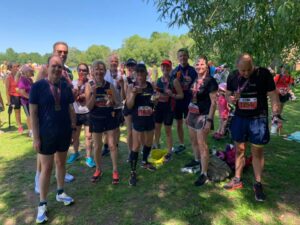 Several Harriers discuss their favourite lolly flavours after the race

Sophie Halden was next to finish, just over a minute ahead of Jane Percival. Sophie was clearly excited by the staging of the race and the general atmosphere as she commented afterwards: “The ice lollies were amazing. Mine was cherry brandy flavoured! Despite passing each other several times, I was beaten by the lady dressed as St Albans Cake.” It isn’t clear what a St Albans Cake is and rumours that John F Kennedy, while visiting St Columba’s College in 1962 said “I am a St Albans Cake!” remain unsubstantiated at the time of writing.

Having joined the club during the pandemic, Jane Percival has not yet acquired a Harriers club vest. The widely held view, expressed after the race, is that Jane would probably run at least a few minutes faster over the half marathon distance if the Harriers cheer squads could recognise her as a Harrier. The cheerleaders today were led by the ever reliable self styled “Chief Shouty Man” Paul Mosely with support from his daughter Helen Terry, her husband Andrew Terry and husband and wife pairing Gareth and Gemma Tucker. After the race the Tuckers were left wondering “who was the random running with Nicky?” only to discover that this was the incognito Jane Percival. 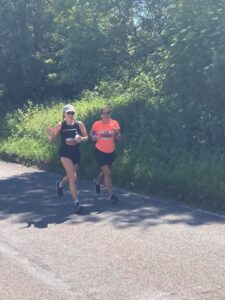 Adrian Stobie and Nicky Moore were next over the line for the Harriers, just ahead of Ciara Barry who finished in 2:11:24 to be the only Harrier to set a new personal best in the tricky conditions. Kim Rodwell, Priscilla Pathak, Kitty Cole and Ines Trent were the last Harriers on the course and they completed a happy group. The last word goes to Chief Shouty Man Paul Mosely who said “All of our runners seemed to be enjoying themselves …all smiling!” With the beautiful weather, a return to organised racing and the ice lollies, who could argue with that sentiment? 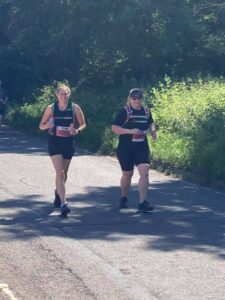 Well, normally the last word goes to Shoutyman Mosely but not this time. In answer to the question, “who could argue with that sentiment?” one possible answer is “definitely not Maria and John!” While 30 Harriers were preparing for the race in St Albans and then running in the heat, Maria and John had decamped to a top secret location in the Somerset to tie the knot and be a lot more happy about the weather. We had a spy hiding behind a wall at their wedding and here is a shot to prove that they got married. Congratulations John and Maria Lawler. 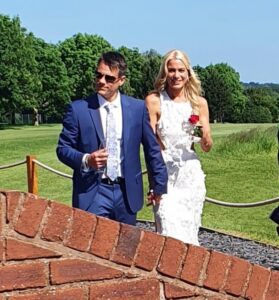 John and Maria as photographed by the GVH paparazzo