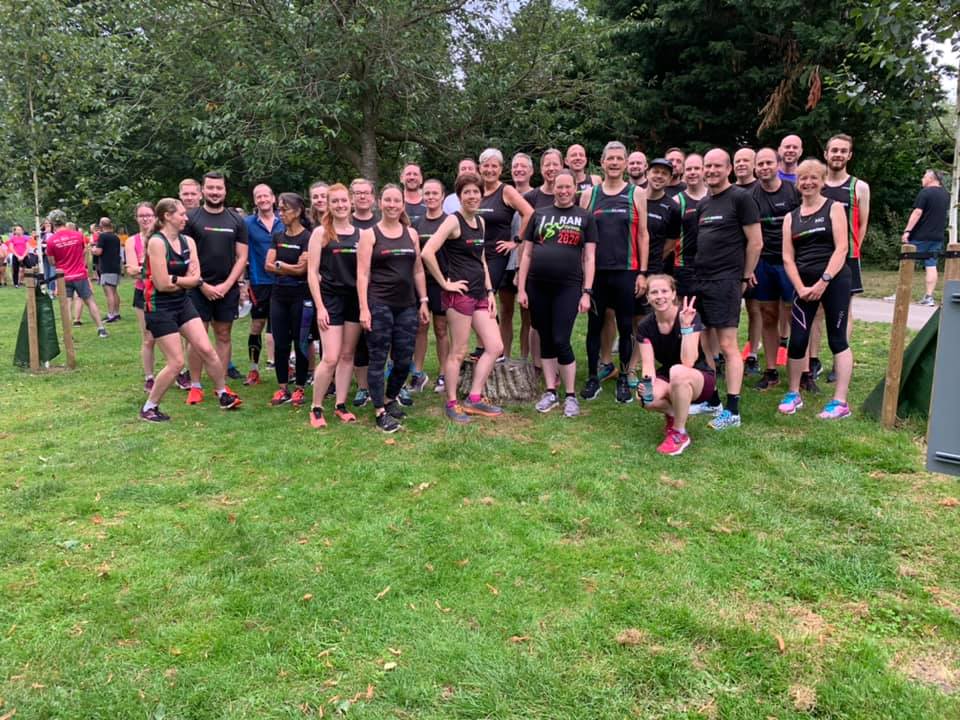 The weekend of 21st and 22nd August saw Gade Valley Harriers celebrate their 30th birthday. The club was formed back in 1991 and has always prided itself on being an inclusive environment for people who like to take running just seriously enough so that they can enjoy the celebrations afterwards. 30 years on, the club ethos hasn’t changed much and the torch is still being carried by several of the original membership.

To celebrate the club’s 30th anniversary the Harriers gathered together in large numbers at Gadebridge Parkrun in the murky gloom of Saturday morning. Nearly 30 Harriers lined up with a total field of over 200 at Gadebridge. 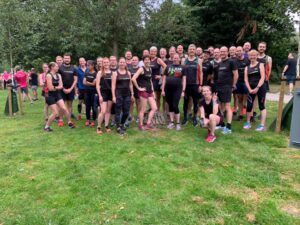 30 Harriers gathered at Gadebridge for the GVH 30th birthday

Matt Watt, Michael Linden and Matt Ashby led the way for the men finishing 3rd, 4th and 5th, respectively, with Matt Watt and Michael beating their PBs for the Gadebridge 5k. Vicky Crawley Wise and Tracey Cotton led the Harrier ladies home, finishing 5th and 6th. Phil Mercer, Merlin Allan, Vicky Crawley-Wise and Dan Green all improved their best time over the Gadebridge course, whilst Priscilla Prathak and Kitty Cole were running the local park run for the first time.

Later on Saturday afternoon some of the Harriers gathered at a secret location for a birthday celebration picnic. When the 30th anniversary plans were hatched nobody knew what would be happening with Covid restrictions so it was felt that the only safe thing to plan was an outdoor event. Nobody seemed to quite know what it meant when the weather forecast claimed “91% chance of rain” but eventually settled for ladies’ captain Angeline Cottril’s assessment that “if you are getting wet as a result of stuff falling from the sky, there is 100% chance it is raining”. 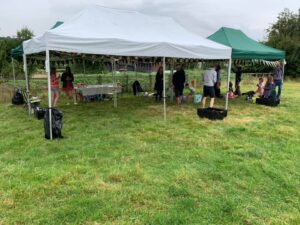 Accordingly, around 30 Harriers gathered with their families, various picnic rugs, some drinks and various devices to keep rain off. There was a family rounders match in which nobody seemed to know the score and some general good fun whilst dodging the showers. It can be reported that Angeline’s assessment of possible or probable precipitation was 100% accurate. 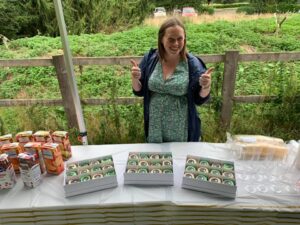 Look at those buns! (oh, sorry, they are GVH cakes)

On Sunday six Harriers decided to leave the club celebrations far behind and take on the Vitality Big Half in London. This event is run on many of the same roads as the iconic London Marathon, going in the reverse direction and following much of the course of the first half of the more famous race. Starting north of the Thames near the Tower of London the route first travels East to go around Canary Wharf before returning to the Tower of London and crossing Tower Bridge to the south side of the river. The route then proceeds east to finish near the Cutty Sark, just north of Greenwich Park, where the London Marathon starts. No fewer than 9600 runners completed the distance making it one of the largest races in the country outside of the big city marathons.

Ines Trent had a very good day, despite enjoying herself to the full at the Harriers’ 30th birthday party on Saturday. After the race, she said: “Great event, I thoroughly enjoyed it. Well organised with loads of supporters and fun. Biggest event I’ve taken part in and the vibe is like nowhere else. By the time I ran past, the marshals must’ve been shattered but they still gave a cheer to pretty much every runner that went past them. Best race ever and possibly a PB, my watch says 2:45:34”. In fact, Ines’s official time was 2:45:18 so she did have her new PB. 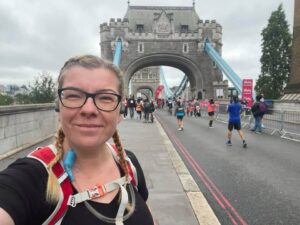 Dave Goodman is a regular racer and is rarely not mentioned in these pages. After his recent trail ultra running exploits, a mere half marathon on roads must have felt like a breeze to Dave. He said, “It’s my first time doing the Vitality Big half. I really enjoyed this event although I found the snake-like queue to drop off the bags weird. A week after my ultra I decided to go “on feel” from start to finish passing and waving to a few friends along the way.” Dave completed the race in a very respectable 1:33:21 which placed him in 1277th place, 103rd in his age category, “not a PB” according to Dave but “going in the right direction”.

Trevor Normoyle, Kelly Cox, Gary Phillipson and Jane Percival completed the Harriers’ contingent in London. Trevor ran a solid race, finishing in 1:49:08, 407th in the very competitive V40 category. Gary Phillipson ran hard to come in just under the two hour mark in 1:59:50, Kelly completed the distance in just over two hours, stopping the clock at 2:02:01 with Jane close behind in 2:04:21. After the race Jane gave more detail: “A good warm up for the London marathon. For me, recovering from a sprained ankle, it was a case of strap my ankle and hope I get to the finish. Hence the cobbled sections were very unwelcome! big PB for Kelly Cox and new member Gary Phillipson as well as a 10 year PB for me!”

Elsewhere on Sunday it was a good, though slightly unexpected, day for Priscilla Pathak. She has been steadily improving her times since she joined the club last year. She takes up the story, “Did another 10K in Leicester yesterday. This was registered in 2019 which was cancelled twice! Wasn’t expecting it and suddenly I received a message to say I have a place. So I went to break my personal record. Happy with the official result 00:56:41, that’s 6 seconds better than my previous PB. I’ll sleep in peace now :)” 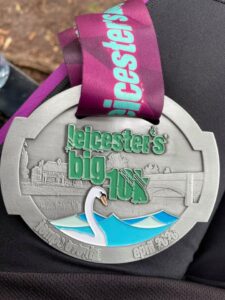 Well done everybody who ran last weekend, here’s to another 30 years!