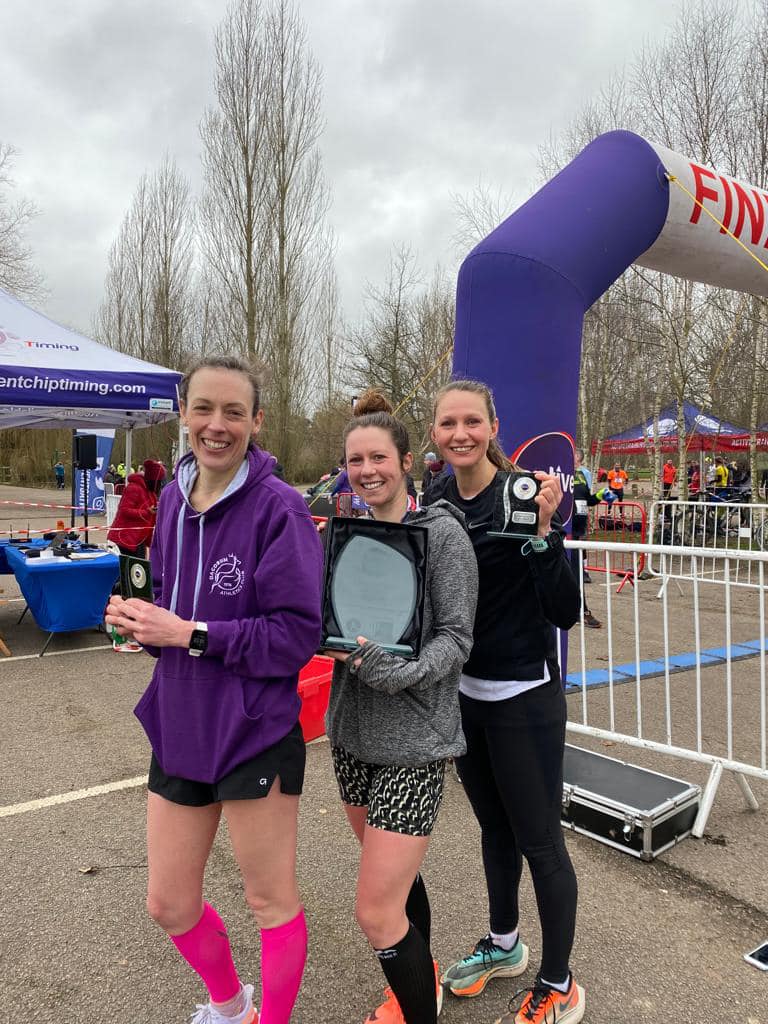 There was much less racing action for GVH on 12th and 13th February as most of the Harriers that took on the Watford Half Marathon last week took a break from racing to prepare for the final cross country race of the season at Biggleswade next weekend.

On Saturday morning just over 20 GVH runners kicked off their weekend with a Parkrun. Vince Ellerby took on the 5k route at Black Park for the 399th time. He ran well to finish in 21:38 in 30th position. 4 Harriers took on the mud of the local Gadebridge Parkrun with Simon Wheeler coming in first for the men and Rachel Haffenden finishing as 7th overall female.

The majority of the Gade Valley runners on Saturday morning were at Rickmansworth enjoying the flatter, but always very crowded, 2 laps around the lake at the aquadrome. Gareth Tucker and Stu Gallagher enjoyed a good battle with Stu never quite managing to get on terms after Gareth pulled away halfway round the first lap. Gareth finished 7th overall in 18:43 with Stuart only 7 seconds and one place further back. Steve Newing and Anthony Willcox also broke 20 minutes for the 5k.

Tracey Cotton was the first Harrier lady to finish at Rickmansworth, finishing 11th overall female in 23:48. Helen Cook and Jane Percival also ran strongly. Mary McCluskey continued her comeback after giving birth and took over 4 minutes off her previous Parkrun time, she was so pleased that she decided to take on next week’s cross country race in celebration (before she saw the weather forecast and backtracked a bit).

The Cancer Research UK London Winter 10k run takes in some iconic London sights. It starts in Trafalgar Square before proceeding East along the Strand and Aldwych towards the City. The route loops around the Bank of England before the halfway stage near the Monument before passing Mansion House and St Paul’s Cathedral. After a return journey along the Strand the runners turn left at Trafalgar Square to finish within sight of Big Ben on Whitehall.

Sunday morning also saw the Love Welwyn Garden City 10k. The race starts on the shores of Stanborough Lake before leaving the park to complete two 4k laps around the Welwyn new town. The runners then complete one circuit of the lake to finish near the start line. 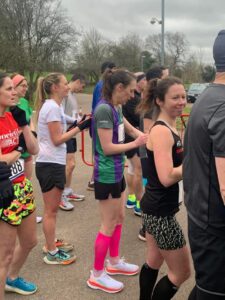 Two people that really loved the event were Heather Timmis and Lisa Newing. In what was perhaps the most impressive result ever by a pair of GVH runners, Heather completed the 10k course in 39:29 in 15th overall place to take the prize for 1st female finisher while Lisa finished as 2nd female in 43:32 to place GVH runners on the top two steps of the podium. Both women finished first in their respective age categories. 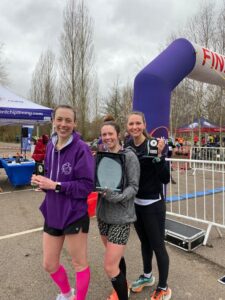 Two GVH and a club that shall not be named

Dave Goodman was volunteering as a marshal at the race and did a sterling job taking photos at the start and handing out medals at the end. Dave said after the race “I was volunteering and cheering on everyone who took part in the Love Welwyn 10km today. A big shout out to our very own Heather and Lisa who took first and second ladies overall. Well done ladies!” 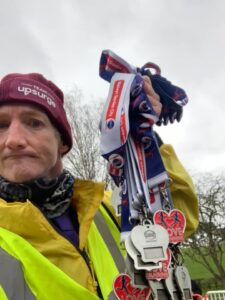 I tried to give the medals away!