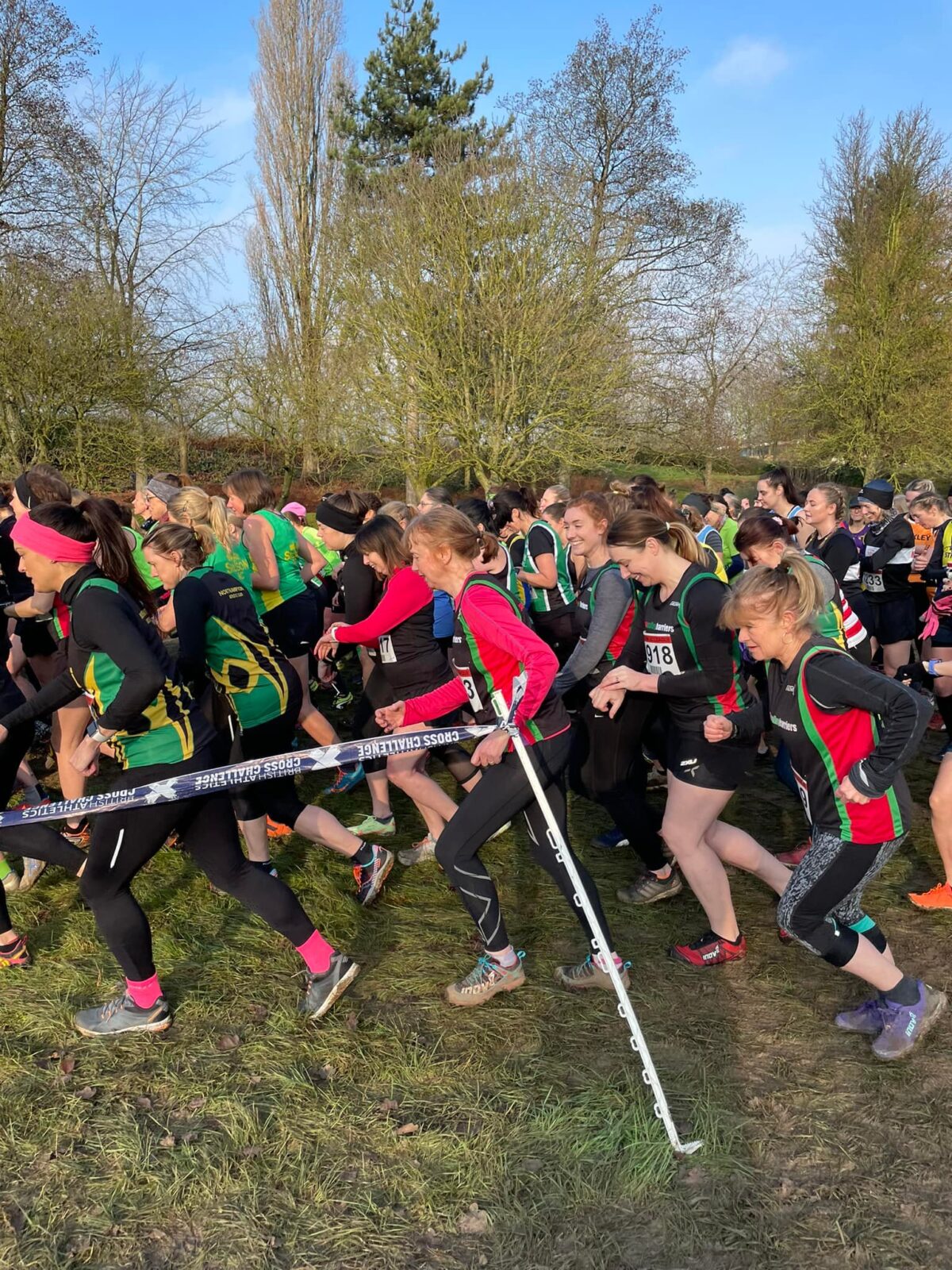 The weekend of 15th / 16th January saw the Gade Valley Harriers compete as a team in the Chiltern Cross Country League for the fourth (out of five) fixture of the season. The Harriers were still optimistic of returning to the top division at the first attempt, going into the fixture only 36 points behind Ampthill and Flitwick Flyers who occupied the last promotion place. With an average score of 1200 points across the first three fixtures, the gap certainly felt far from insurmountable. 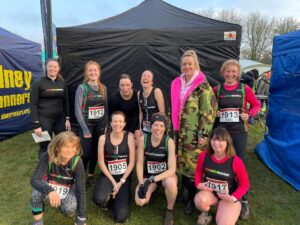 You aren’t competing because you have a bad back? How? Too many “star jumps”?

As always, the weekend’s running began around the country with Parkruns. Most GVH runners kept their powder dry for the Cross Country race in the afternoon but there were still about 20 GVH members taking on various of the 5k courses.

6 Harriers were at the ever popular Rickmansworth Parkrun as part of a crowd of no fewer than 511 runners. Lewis Trent was the first home, with Andy Cook, nursing his latest injury and testing a new pair of super shoes, next. Sue Crowther and Molly Rice were next with Ines Trent coming home with a new PB of 32:47. Mary McCluskey was running her first Parkrun since giving birth and was extremely happy to finish in 35:03, ahead of over 100 runners in the puzzlingly large field. 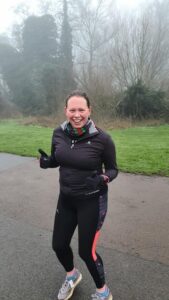 The Chiltern League match took place on Saturday afternoon at Campbell Park in Milton Keynes. After recent heavy rain and in a park that is known for being boggy, the course could only be sensibly described as extremely muddy, heavy and challenging. The women’s race started at 1:15 and the men’s race, usually the last to start, was at 2:00, guaranteeing the men the worst possible conditions for their 5 mile, 3 lap course.

Nobody is muddy yet.

GVH women had a strong line up for their race over two laps, about 3½ miles, through the Campbell Park mud. Teresa Reason, often the Harriers’ strongest competitor, again showed her class, finishing first for GVH and 18th in Division 2, nearly two minutes ahead of Vicky Crawley Wise who finished 31st. Kim Morgan ran strongly on her return to the cross country ranks, finishing only 27 seconds and 6 places behind Vicky. Jenny Stubberfield was only 2 places behind Kim with Laura Johnson completing the 5 scoring runners for the GVH women. 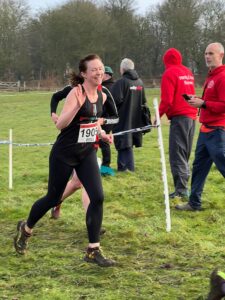 Ashleigh Taylor, Jacki Eskdale, Helen Cook and Tracy Ann Scollin completed the team for GVH women. The women’s points haul of 322 was their second highest of the season and placed them in 4th position on the day, to remain in 5th position of the women’s teams after the four fixtures. 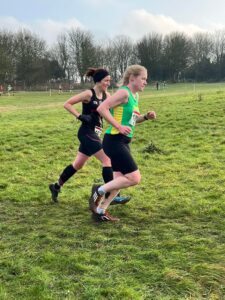 The tight layout of the Campbell Park course means that the men’s race, which starts from a different position to the other races, crosses the path of the main course just before the end of the lap. This has never previously caused a problem but on this occasion either the start of the senior race was delayed or the under 17 boys completed their course more quickly than expected. Whatever the cause, the result was that the leaders of the under 17s race had to fight their way through the vast body of 400 or so grown men to complete the last part of their race. There were no reports of casualties although there were many reports of bad language. 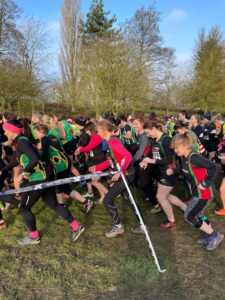 Artist’s impression of the start of the men’s race, if the men were better looking

After the chaotic opening the men soon discovered that it was going to be an unusually tough race as they approached the first steep hill after about 400 metres. After the earlier races, the narrow course between the tapes was so muddy that those that chose not to wear cross country spikes found it impossible to ascend and sought greener grass outside the tapes. More chaos ensued as the marshals in attendance quickly realised that the course needed to be widened to allow the runners to use some green grass and were trying to move the markings as the field thundered past. Again, no injuries were reported but the language was bluer than Angeline’s on learning that a race entry includes a mug but not a medal. 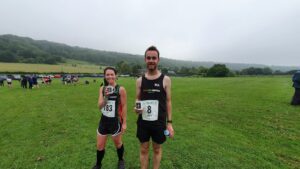 After 2½ gruelling laps over what one Gade Valley runner summed up by saying “this was the first time I’ve ever done a race and thought that a competitor drowning was a genuine possibility”, Matt Ashby, Matt Watt and Michael Linden again finished as GVH’s top three. This time they were separated by only 42 seconds and 4 places at the line. Captain Andy Wells, Gareth Tucker and Jon Roberts were next home, finishing 33rd, 36th and 45th before a gap to James Birnie, Jon O’Marval and Steve Newing who finished in consecutive places, 70th to 72nd with Jono occupying the last scoring place for GVH. Merlin Allan, Phil Mercer and Dave Goodman completed the team. 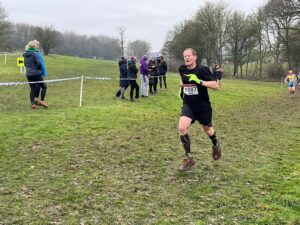 Jon O’Marval shows why he is Ireland’s premier superhero

The men picked up 888 points on the day which was a massive improvement on the 781 they picked up in December but unfortunately, perhaps owing to proximity to their Ampthill base, Ampthill and Flitwick Flyers Men also picked up a big haul of 1007. Ampthill’s men are placed 1st in the league after 4 events with GVH in 3rd place. With the GVH women having gained 41 points on their promotion rivals, it leaves Ampthill in 2nd place overall, 114 points ahead of GVH, with Northampton AC a further 254 points ahead of Ampthill. Clearly 114 points is within striking distance so if Gade Valley can field a strong team for the final fixture, and perhaps if some Ampthill runners are put off by the long trip to Biggleswade, then GVH could still end the cross country season triumphantly next month. 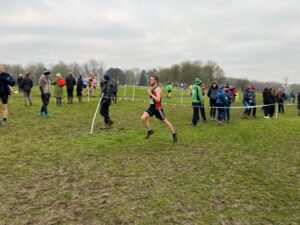 Why doesn’t he look tired or muddy?

It can be confirmed that everybody’s favourite model and influencer was competing on Saturday for Watford Harriers. He was spotted in the start pen by Gareth and Phil who warned everybody to be on the lookout for him. Having gained notoriety for out-sprinting Gareth and out-elbowing Ross Deacon back in 2019 he now seems to be gaining a reputation for a fast start followed by a fast fade. Matt, Matt and Michael were the first to overtake him on the approach to the first hill, while Steve, Jon O’Marval and James passed him in quick succession through the trees at the top of the course on the first lap. Dave Goodman was the only Harrier who didn’t manage to beat SJBT but it wasn’t clear, and Dave wasn’t sure, who started the faster between the two of them so it isn’t possible to know if either overtook the other at any point. 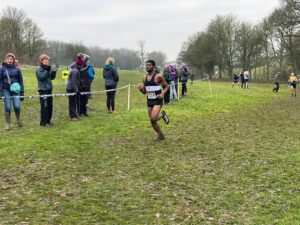