It was a quiet weekend of racing for Gade Valley Harriers with the three times postponed London and Manchester Marathons fast approaching in the next two weeks. As usual, the weekend’s action kicked off with Parkruns at 9:00AM on Saturday morning but even the Parkruns were quieter than usual with only around 20 Harriers taking part.

Black Park is a very pleasant location for a Saturday morning outing as club stalwart Vince Ellerby knows very well. He has taken part in 454 Parkruns in total and 384 at Black Park. He was at Black Park again on Saturday, finishing the 5k course in 21:53 in 31st place.

Also at Black Park was Susie Ivin. She has also been a long term Parkrun participant but currently has over 400 fewer appearances to her name than Vince. It was nonetheless a celebratory run for Susie as she earned the right to wear the red Parkrun t-shirt by completing her 50th Parkrun. She commented afterwards “[I ran at] Black Park parkrun today for my 50th parkrun, it only took me 12 years, I ran my first one here in 2009!” She was joined by club members Leona Flaherty and Helen Heathcote as well as her sister, Steph. 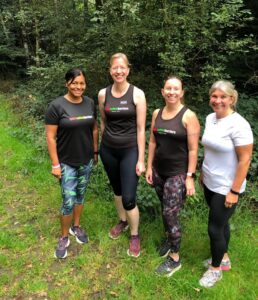 Meanwhile, there were 6 Harriers at the ever popular Rickmansworth Parkrun. Nick Crowther led them home in 5th overall position with a superb new PB of 18:13 while Antony Beamish warmed up well for his appearance in the London Marathon next week, finishing only two places further back and equalling his PB.

At the other local parkruns there were a couple of family outings. The Wells family, Andy and Michelle, ran at Gadebridge with their two children and a dog while Ines Trent visited Cassiobury Parkrun in Watford with her daughter and stepson Lewis. Lewis Trent put in the performance of the day clocking a superb PB of 19:36.

If there is a dearth of available racing opportunities, one person guaranteed to find those opportunities is Dave Goodman, Gade Valley’s most prolific racer. He combined a marathon with a European city break and all the Covid protocols that currently involves as he took to the streets of Berlin for his 54th official marathon. 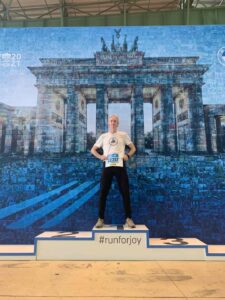 Dave attempted a piece of historical satire before the race as he approached a patisserie on Unter Den Linden and declared “Ich bin ein Berliner!” while holding a doughnut aloft. Unfortunately for Dave, the population of Berlin, as with most European cities, speak far better English than the English so the joke was lost on the patissier who responded with “Sir, you are not a politician, you are here to run the marathon”. Dave then committed verschlimmbessern by attempting more cold war puns and his subsequent responses were nothing but treppenwitz.

Once the running action began Dave was more in his element. The conditions were warm whilst Dave’s body is never really allowed to recover fully from one marathon to the next, so he had to battle hard. “It was quite warm out there today and unfortunately I got a touch of cramp around the 23km mark. Thankfully they had some volunteers doing massages at 25km & 35km so I made a pit stop at both”, said Dave. Despite the cramp and the unscheduled stops Dave managed to break the four hour mark, finishing the course in 3:59:12.

Next weekend Dave will be joining over 50,000 other athletes running the London marathon in what promises to be the World’s largest ever mass participation running event. In addition to 50,000 runners in the capital there are set to be over 50,000 people running the Virtual London Marathon on the same day. Rumours that Dave will abandon the Rasta Banana costume in favour of a doughnut outfit are yet to be substantiated.