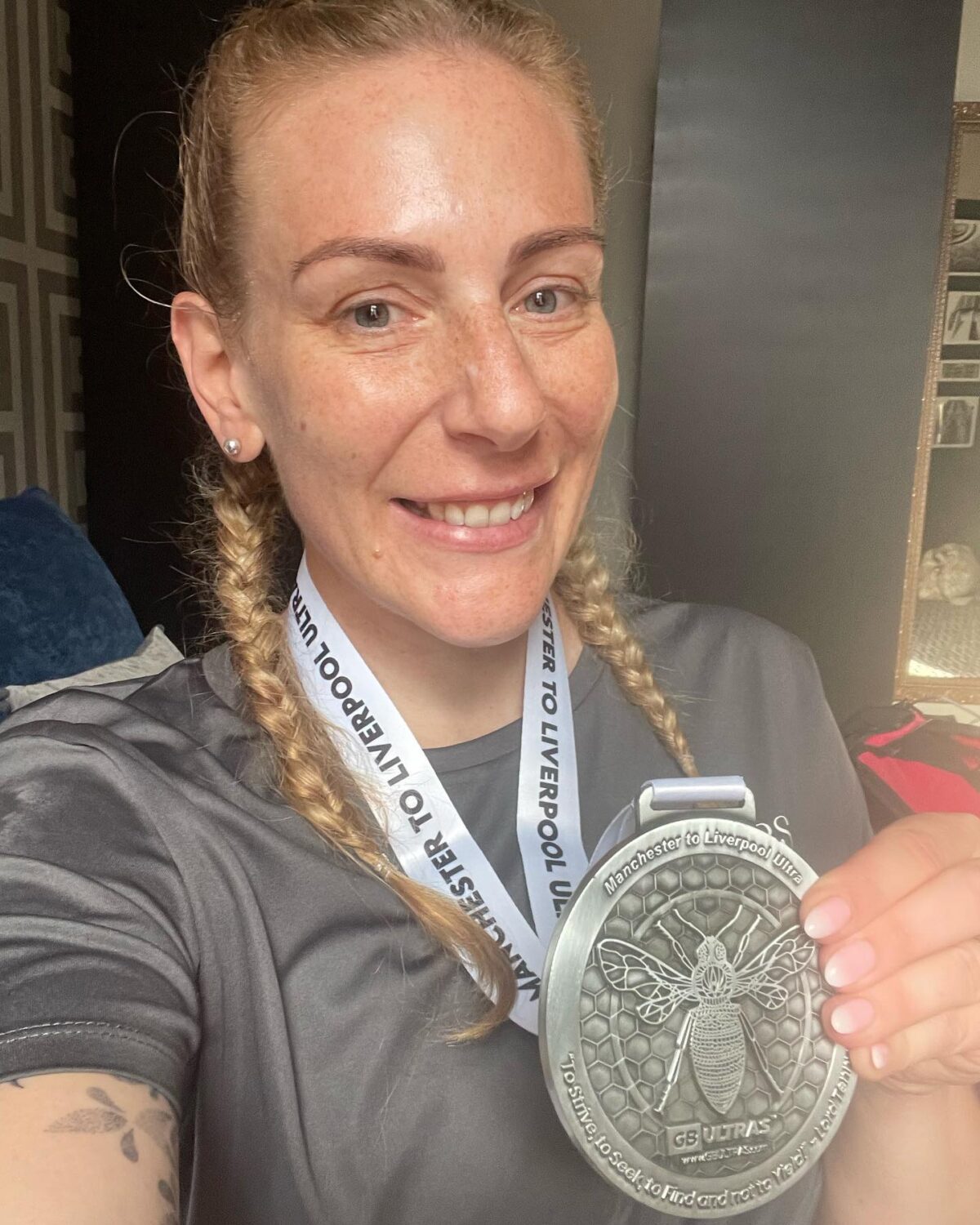 Easter weekend is not a busy one for races in general as most races take place on Sundays and most people are too busy visiting relatives, rolling hard-boiled eggs down hills or recovering from a two day hangover while eating chocolate eggs to bother with racing on Easter Sunday. 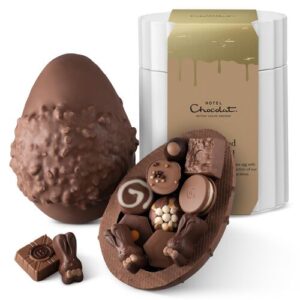 Parkrun is oblivious to such concerns however and thus the Saturday of Easter weekend (Easter Saturday?) still sees thousands of people taking on Parkruns all over the country. Gade Valley was represented at all of the usual local runs with Michael Linden posting the fastest time of the day, 19:10 at Cassiobury Park, Anthony Willcox not far behind with 19:20 at St Albans. Sue Crowther posted the fastest time for GVH ladies, posting 25:10 at Cassiobury Park.

Branching out from the usual locations were Susie Ivin, Leona Flaherty, Paula Cook and Helen Heathcote who decided to visit Church Mead Parkrun. This is an almost brand new event, the first running having taken place on 9th April. After the 4 completed the 5k course, Susie posted on the club pages, “GVH ladies testing out the new Church Mead parkrun this morning in Amersham. Lovely undulating course. This will be good practice for cross country in the winter.” 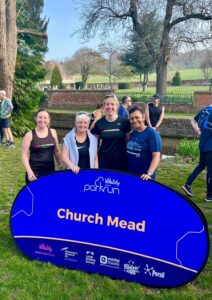 Before the Parkruns, Good Friday saw two races with Gade Valley participation. The St Albans Easter 10k is a firm favourite and saw 18 Harriers take part while further afield Sam Sparks was the sole representative at the Manchester to Liverpool ultramarathon, a 50 mile race, somewhat unsurprisingly, from Manchester to Liverpool. 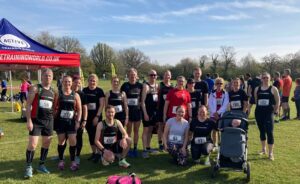 It wasn’t too hot at this point!

The St Albans Easter 10k starts and finishes in Highfield Park in St Albans is a mostly flat out and back route following the Alban Way, a cycleway built on the route of the old Hatfield to St Albans railway line. The surface of the Alban Way is a good one and that, combined with the flat profile and the cool April weather, usually provide ideal conditions for fast racing. Unfortunately, nobody told Carol Kirkwood that as she smilingly predicted unseasonably hot temperatures for Friday morning on BBC Breakfast. Harrier Nicki McDermott summed it up when she asked afterwards “did anybody actually enjoy that race? It felt too hot for me to enjoy running…” 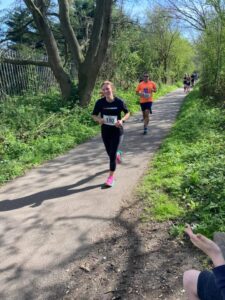 Not enjoyable. Looking forward to the pub.

Some people, though not many, did manage to enjoy the conditions enough to post some notable times, however. Robert Bowler continued his duel with Merlin Allen over the club’s V60 records. The V60 10k record was held by club stalwart Martin Storrie who set a mark of 56:49 at the St Albans summer 10k last year. Robert takes up the story: “Robert took advantage of Merlin Allen not running at St Albans to claim another GVH M60 record. Having Merlin and I competing has been exciting and motivating. We’ve only got a couple of years to make some decent V60 marks before the next generation rewrite the record books. I expect some big improvements in the next 12 months” This certainly was a big improvement as Robert lowered Martin’s mark by over 12 minutes, the new target being 44:21. 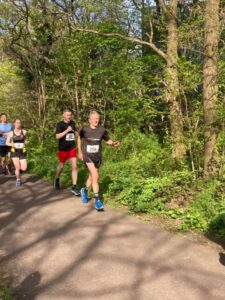 You only got the record because Merlin wasn’t running!

Matt Ashby has also been taking big chunks out of his personal bests recently. Matt recently joined the increasing number of amateur athletes who have invested in modern “super shoes” which further improved his already superb times. During the warm up on Friday he told me he had bought his Nike shoes “in a January sale or something” for less than the usual price (and a lot less than what I’d paid for them), but Matt’s mum later told me that “he didn’t dare tell [his girlfriend] what they cost until after he broke his half marathon PB at Berko”. Maybe he’ll be allowed to invest in more new shoes now as he smashed his 10k PB, setting a new best of 36:33, finishing 12th overall. 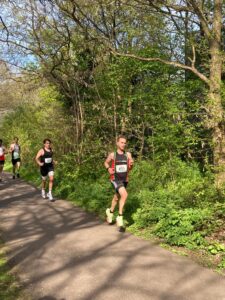 Molly Rice was the next Harrier to set a new PB. She ran strongly through the heat to finish in 53:31, 15th in her age category. Ciara Barry was running in her first ever 10k race so was guaranteed a PB. She suffered with everybody else in the heat but was extremely happy to record her time of 1:01:19. She said she had been hoping to get under an hour and is confident of doing that when the weather is kinder. 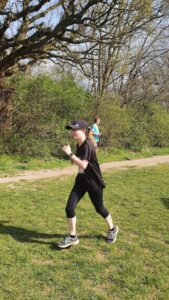 YES! Your first race at the distance is ALWAYS a PB!

One person who was extremely happy to finish under 60 minutes was Mary McCluskey. She is returning to fitness after her break from running for maternity duty and wasn’t expecting to beat the hour. She said “I never expected that, especially in that heat. How come I can’t run that fast in training?” Hard work, race adrenaline and new shoes all contribute to exceeding expectations. 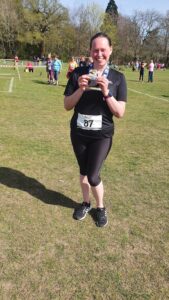 There were some close finishes between the Harriers at St Albans. James Birnie finished in 66th place, 15th in his age category, 11 seconds ahead of Jono Marval (68th and 16th in the same age category), but they recorded exactly the same chip time of 41:43, which was a new PB for Jono, “Mainly as I haven’t done a 10k race in a few years!” As James has been known to comment in the past “For finishing positions, gun time is king” (except when it wasn’t, during Covid, when chip time was king). 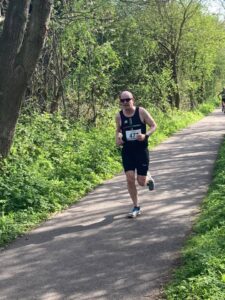 Jono not in the picture.

Sam Raffetty was the first female Harrier to finish, in 219th overall position, 49th female, only one place ahead of Jenny Stubberfield. Sam had clearly also read the memo about gun time as she finished 2 seconds ahead of Jenny at the finish but 4 seconds behind Jenny on chip time. Sam recorded 48:51 while Jenny recorded 48:47. 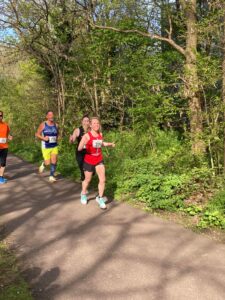 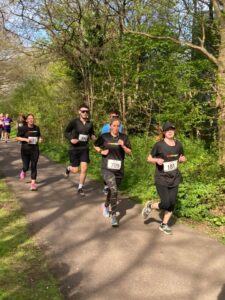 Isabel Wilson (2nd in her age category), Karis Thomas, Martin Storrie and Ines Trent made up the Harriers group at St Albans. As well as battling the heat, Ines had to contend with a fall during the race. As the course left the Alban Way and made some twists and turns toward the A414, in so doing moving from one of the most pleasant places to run a race to one of the least pleasant imaginable, Ines was taken by surprise by one of the changes of direction. “As we came out of that field, I didn’t notice that there was a kerb and before I could do anything about it, I tripped over the kerb and I was on the floor”, was her description of the unfortunate incident after the race. 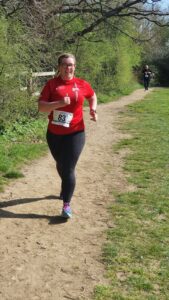 Smiling at the end despite the fall!

While the Harriers were lining up at 9:30 at the start of the St Albans race, Sam Sparks was already over 3 hours into her race, having started a little after 6:10AM in Manchester on Friday morning. She said “After 2.5hrs sleep I was not expecting great things out of this race and was shattered even before I started. It was hot which I was not expecting, even though I have been all Michael Fish about it this week! The pain really hit me at around the 30 mile mark and I found myself running pretty much on my own for most of the race.” 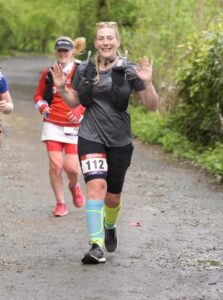 Sam running alone, nobody near her.

The race awards gold medals for the top 100 finishers (across all categories), silver medals to those finishing 101st to 200th and bronze medals to the rest of the finishers. Commenting on the result Sam said “In my head I secretly wanted to finish in anything under 11 hours and to try and bag that silver medal. I knew I was on track half way and tried to overtake as many people as I could and just keep plodding along!” 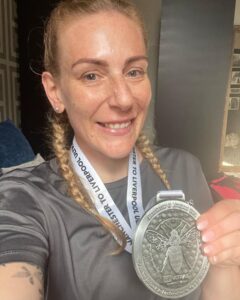 Well done on the Silver medal!

One of the biggest challenges with ultra running is pacing. Most people, even experienced and elite ultra runners, experience a sometimes sharp drop off in pace in the later stages of ultra marathons. Sam managed to pace herself extremely well through the 50 miles however, saying: “I am so pleased to have run it all (apart from the pit stops) and have pretty consistent pacing! My finishing time was 10hrs 13 and I got that Silver medal!” A superb effort by Sam and many of the Harriers are looking forward to the celebrations scheduled for next weekend. 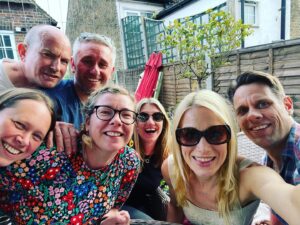 How every Good Friday should end (and some bad ones)