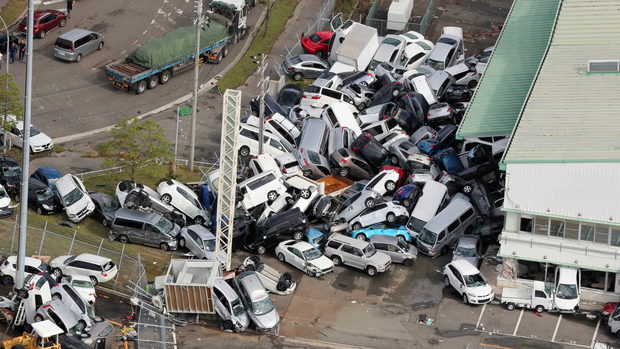 The weekend began with Parkruns on Saturday morning but in a taste of further disruption to come, many of the 5k time trials were cancelled because of damage or enduring unsafe conditions caused by Storm Eunice on Friday. Two local Parkrun casualties were Rickmansworth and Black Park, causing some GVH regulars to look elsewhere for their Saturday morning run.

6 Female and 2 male Harriers took on Houghton Hall Parkrun with 7 of the 8 running the Houghton Regis course for the first time. Helen Terry was the first Harrier lady to finish the course, 15th overall female, while Helen Heathcote was the only GVH runner not making her debut at Houghton Hall. For the men, Antony Beamish and Vince Ellerby were refugees from, respectively, Rickmansworth and Black Park. Antony enjoyed his new surroundings as he finished 1st overall in 19:16, 5 seconds ahead of 11 year old Joshua Hampson Wallace in second place.

Gadebridge Parkrun was deemed safe enough despite the muddy conditions and Anthony James was happy to take on the challenge, finishing first overall in 20:09, an excellent time given the conditions. Rachel Haffenden was the only GVH female running at Gadebridge and she finished 9th overall female in 28:02.

On Sunday, Dave Goodman was the sole Harrier in racing action as most of the Harriers had taken part in (or tried to take part in) the final round of the Chiltern League Cross Country on Saturday. Dave took part in his 58th competitive marathon, surprisingly his first this year, in Spain. Dave said “Good morning from sunny Seville. Marathon 58 completed. First half pretty good, 2nd half didn’t go to plan. Happy to finish and a good benchmark set for the year.” Dave’s time was a more than respectable 3:39:31. 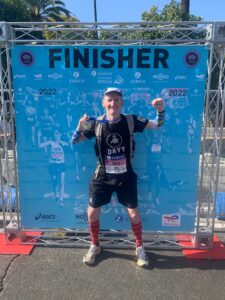 Unusual to see Dave with a marathon finisher’s medal

The main running event of the weekend was the final round of the Chiltern Cross Country League at Shuttleworth College, near Biggleswade, in Bedfordshire. At least, that is what most of us started the weekend believing… 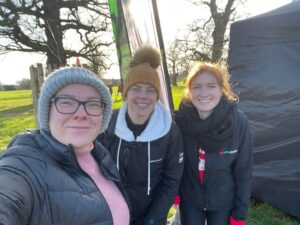 4 hours in a car to take one selfie!

Imagine if you were to take all the most disastrous aspects of the planning of all the worst historic fails, added in a sprinkling of people with a proven record for not understanding how to induce drunkenness in a sea of beer, chuck in a classic “Get orrrffff moi land!!!” landowner and a basic absence of the ability to count the number of available car parking spaces and you may end up with some notion of the utter chaos that was meted on the athletes of the Chiltern Cross Country League on what should have been the celebration of the end of the first post-pandemic cross country season.

Everything started to go wrong on Friday when Storm Eunice descended on the UK. Given that this storm was the most widely predicted, publicised and reported weather event since Michael Fish famously denied that any trees would fall over back in 1987, it did come as something of a surprise that the venue for the final cross country league fixture of the season was taken by surprise. Nonetheless, it was later reported that, despite the loss of access to two car parks, sufficient parking remained to allow the event to go ahead. Quite how Shuttleworth College calculated that around 200 spaces were sufficient for the close to 800 athletes (and juniors and their parents) that usually attend these events, is anybody’s guess. 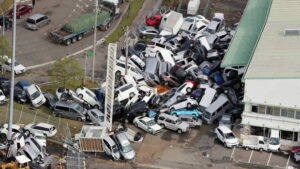 Drone shot of the car park at Shuttleworth

Chiltern Cross Country League announced on their official Facebook page on Friday evening at 8:00PM that “…Shuttleworth College have reviewed all their ‘Risk Assessments’ and are working to official guidelines…” and that the event would go ahead. The first indication that most competitors got that something wasn’t quite right was when they joined the queue of cars attempting to enter the car park and didn’t move for some considerable time. Most people spent well over an hour in the queue and many did not make it in time to start the men’s race, even though the start time was pushed back by half an hour. 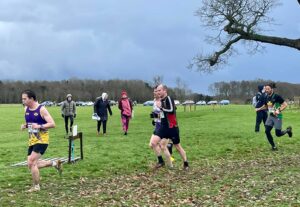 There was much recrimination about what had gone wrong but the general consensus was that the Chiltern League had done all they could reasonably have done, having been assured by the venue that things could go ahead as planned. Biggleswade AC, the local organisers of the event, also deserve huge credit for dealing with the chaos and doing their best to get everybody parked and ready to run in time.

With the men’s race, originally scheduled to start at 1:30PM (the women’s race already having been put back to 2:45PM), a few minutes from starting at the later time of 2:00PM, a rumour started to spread that the site owners wanted the event to be cancelled. This rumour started as one competitor overheard a lady on a walkie-talkie saying “OK, so we are now blocking the highway, the event has to be stopped!” It remains unclear how stopping the few hundred men that had managed to make it on to the start line from running 3 laps of a muddy field would relieve the pressure on the nearby B658, blocked by cars attempting to enter the venue. In any case, the men’s race did get underway at 2:00PM.

As the men raced around the 9k course further drama was unfolding around the tent village as first it was announced (or rather rumoured) that the ladies and Under 20s races were cancelled, and then it was believed that the ladies’ race would go ahead after all, before finally it was rumoured that the Police had been called.

According to the Chiltern League’s later announcement “It appears we were told by Shuttleworth while the senior men were running, that we had one minute to clear the venue or the police would be called… The police did arrive in two cars, but we have no idea what Shuttleworth said to them.” Having spoken to several other competitors after the event, and examining social media traffic, we can report that the Police were deep in conversation with the owner of Shuttleworth College and, responding to a request to clear the site asked “What do you want us to do? We aren’t going to run after them!” 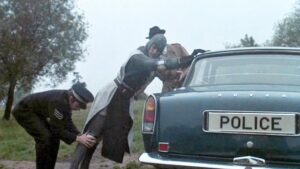 After the dust (and mud) had settled it was possible only to conclude that the men’s race did take place, with a reduced field, and the women’s race did not take place. A group of athletes including GVH’s Vicky Crawley Wise, Teresa Reason and Lisa Newing “turned Guerilla”, according to club captain Angeline Cottrill, and “did a lap of defiance before heading home”. By the time the lap of defiance was complete most of the remaining Harriers had already left the site as the local organisers had apologetically told them of the “1 minute to clear the site” ultimatum. Clearly the owners of the site had taken leave simultaneously of their senses and any sense of the laws of physics.

It was easy to forget that a race did actually take place. James Timmis was competing in his first cross country fixture for the club and made an immediate impact, finishing 7th overall and first home for GVH. Matt Ashby, Matt Watt and Michael Linden who had all performed consistently throughout the season, all finished in the top 15. Gareth Tucker, Andy Wells, Steve Newing and James Birnie, who finished in 52nd place, completed the 8 scoring runners for Gade Valley. 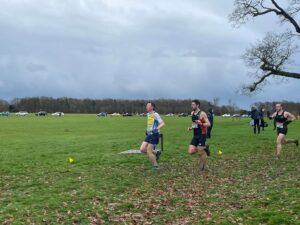 Jon O’Marval was next finisher for the club, one place and one second ahead of Stu Gallagher who continues to recuperate after his injury hit end to 2021. Merlin Allen completed an excellent set of results in the league season finishing second in the V60 category. At the time of writing the league are yet to publish the individual category winners for the season but it seems probable that Merlin will pick up an award for finishing in the top 3 of the V60 grouping. Ed Price and Phil Mercer completed a strong line up for GVH. 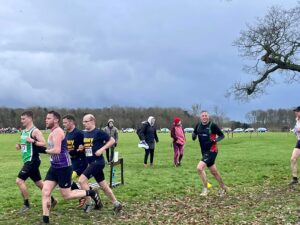 Although the club started the day with optimistic thoughts of overhauling Flitwick and Ampthill Flyers in 2nd place of division 2 to win promotion back to division 1, it is still unclear what the final standings of the league will look like as we await announcements from the league committee. It is fair to say, however, that it is vanishingly unlikely that GVH would have overcome the 114 point deficit as the F&AF team accumulated 751 points to GVH’s 701 on the day making it virtually impossible that the GVH women could have bridged the gap. 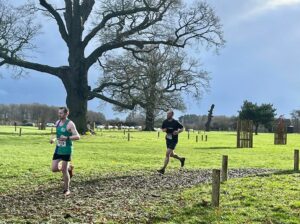 Linden made the sun come out while floating

Ultimately, the cross country season was a success. After the disappointment of the cancellation of the whole of the 2020/21 season, just being able to compete in 5 races (or 4 for the women) through the wet and mud was an (almost, take note Shuttleworth) unqualified success. Although GVH fell short of the goal to be promoted back to division 1 the silver lining is that the club can look forward to another season near the top of a division seeking promotion, rather than near the bottom of a division seeking to avoid relegation. But we won’t be going back to Shuttleworth College next season. Or ever, in fact.