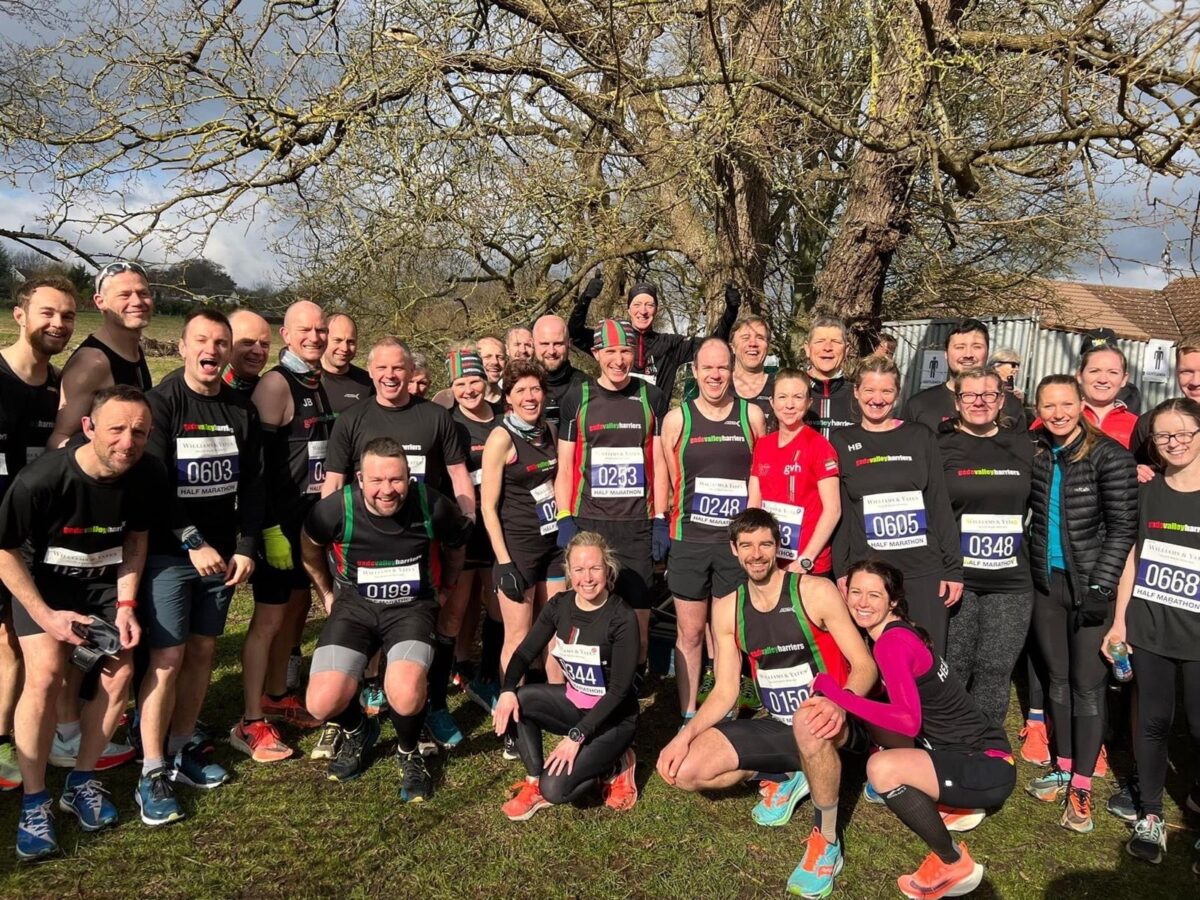 The weekend of 5th / 6th March saw the return of the Berkhamsted Half Marathon after it wasn’t staged in 2021. The Berkhamsted race was one of the last to take place before the first lockdown, back on March 1st 2020, when the world thought that Cabin Fever was a thing that only happened in Stephen King novels, toilet paper was not considered a valuable commodity and Russia respected the integrity of international borders.

Over 50 Gade Valley Harriers took part in the Half Marathon and 5 mile Fun Run on Sunday morning. Both races start at Berkhamsted Cricket Club, near the historic castle, and proceed through the town to London Road towards Hemel Hempstead. The 5 mile race turns left up the brutal Bullbeggars Lane to Potten End before looping back down New Road to Berkhamsted Cricket Club. The Half Marathon, which starts half an hour earlier, takes a longer route via Heath Lane to Potten End before a much longer loop through Nettleden, Little Gaddesden and Ashridge back to the start point. 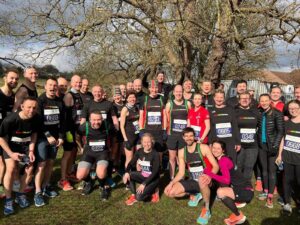 While most of the running club was running in Berkhamsted, handing out water at Ashridge House or cheering loudly on the route, one member had taken the singular decision to enter the Scottish Winter Swimming Championships on Sunday morning. Whilst swimming is not necessarily a questionable choice of activity early on a Sunday morning, choosing to swim 450 metres in a Scottish Loch in March surely has to be. Harrier Susie Ivin commented on Sunday afternoon that “I did a slightly shorter race this weekend at the Scottish Winter Swimming Championships in the beautiful [and cold, I would think] Loch Tay. I completed the 450m endurance swim (and didn’t come last!!) supported by our lovely Helen Heathcote. I think my time was 11mins29 but I don’t think there were any official results other than those who came 1st!” 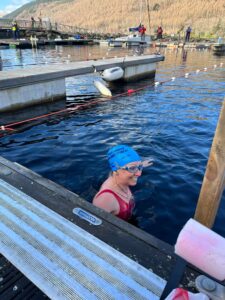 Most road races are organised by local running clubs and form an important revenue stream for running clubs and local charities alike. The Berko race has always been organised by the Rotary Club of Berkhamsted and has a long history of raising money for local charities such as the Pepper Foundation and the Hospice of St Francis. This year Gade Valley Harriers were asked to provide support to the race and were happy to provide, with help from Dacorum AC, the water stop at Ashridge Management College. Paul Mosely, Mary McCluskey, Emma Cooper, Paula Cook and Lisa Bartlett from GVH and Jason Hawkridge from Dacorum AC handed out the water and the jelly babies about 10 miles into the 13 mile race. 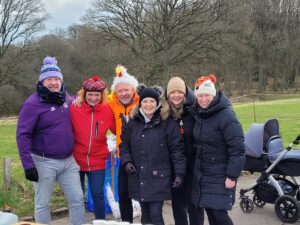 Foxy ladies, “the guvnor” and a bloke from Dacorum AC

The 5 mile fun run started at 10:30 which meant that most of the competitors finished before the bulk of the Half Marathon competitors came through. Some of the GVH runners chose to do the shorter distance as they come back to full fitness while some took the opportunity to run with their children. Anthony Willcox, Simon Wallis and Lisa Newing were all in the former category and they all recorded superb times for the 5 mile distance. Anthony finished in 33:00, Lisa in 35:01 and Simon was just behind in 35:09. 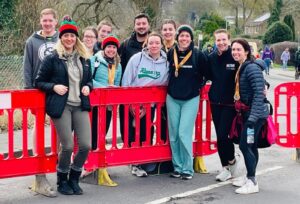 Sue Crowther was running with her daughter Imogen but was upstaged as Imogen finished in 39:08, 95 seconds ahead of Sue, while Michelle Wells ran the 5 miles with her son, Harry. Kirstie Hardiman also took part in the 5 mile race. Sue said afterwards “I did the 5 miles. I can’t remember having done that distance before so I suppose you could call mine a PB. My daughter Imogen ran it too….”

The main event of the day was, of course, the Half Marathon and the Harriers continued to show the excellent form that they’ve shown collectively since mass racing returned. No fewer than 45 GVH athletes took on the hilly 13 mile route and 15 recorded new personal best times.

The best performance of the day was a split decision between Heather Timmis and Robert Bowler. Heather recorded a massive new PB, finishing the race in 1:27:36, 50th overall and 2nd female out of 181 (1st out of 69 in her age category). Robert Bowler, continuing his quest to acquire the GVH V60 records, ran the course in 1:39:33, finishing second in the V60 category and broke his own V60 Half Marathon club record. 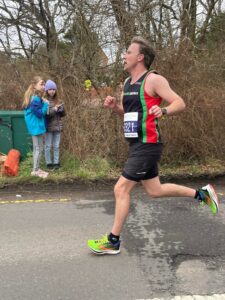 Best looking man on the course, no, the county, no the Country! NO! THE COMPLETE WORLD!!!

Ahead of Heather and Robert there was a blizzard of Gade Valley PBs. Leading the way was Matt Ashby who had finally caved in to pressure and invested in a new pair of Nike Vaporfly shoes. The shoes showed their worth as he took over 3 minutes off his previous half marathon mark to finish 6th overall in a frankly mind-boggling 1:17:56. James Timmis, Michael Linden and Matt Watt also ran PBs and also recorded sub 1:20 times while Chris Dowling also set a new personal mark as they all finished in the top 20 of the race.

Jon Roberts (1:22:11) and James Birnie (1:26:52) unfortunately didn’t get the memo about the PBs but were still very happy with their times. Andy Wells did manage a PB, splitting Jon and James in 1:24:55 with Antony Beamish and Heather Timiss just behind. All 5 runners finished in the top 50 of the race. 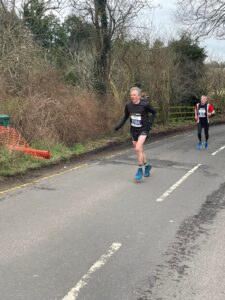 Records, he hoovers records for fun!

Several Harriers were racing for the first time in over two years. Dylan Wendleken was happy with his performance, saying “I hope I don’t embarrass myself, anything near 90 minutes will be good” (he finished in 1:30:58), head coach Ed Price was happy with his time of 1:33:24 while Gwyn Pritchard (1:32:04) and Jon O’Marvel (1:33:49) recorded new PBs. Jon commented “Put me down for a PB.. by 15 mins! Last half marathon race was 10+ years ago.”

Merlin Allan was the next Harrier to record a new PB, with 1:41:23, while Andy Bishop, Charlie Cadogan and Skip Phillips enjoyed their first races for some time. Dan Green, Laura Johnson, Helen Cook, Anthony Fogden and Ines Trent all set new Personal Best times while Holly Beckett continued her superb recent form to record a second half marathon PB in the space of two weeks, following her run at Watford. Her new mark is 1:56:23. 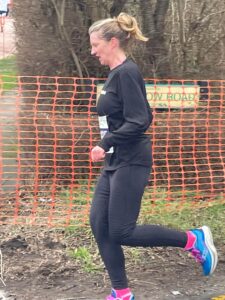 Her name is Beckett, PB Beckett.

In addition to the blizzard of PBs for the Harriers’ men and women, there was a bonus for the Harrier ladies as they built on Heather Timmiss’s excellent 2nd place to win the women’s team trophy. Kim Morgan (1:43:11, 21st overall female), Vicky Crawley Wise (1:44:33, 26th) and Sam Raffety (1:45:55, 29th) made up the victorious Gade Valley Harriers quartet. 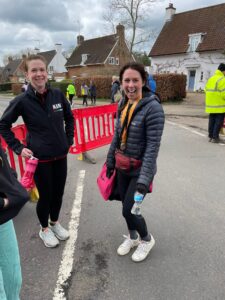 You only came second? Well WE WON!!!

While the blizzard of PBs ran down on Gade Valley Harriers, spare a thought for Phil Mercer, who ended the race unsure of whether he had beaten his previous best time. After promising to check when he got home he later confirmed that there was “…no PB for me, missed by 2 secs”. 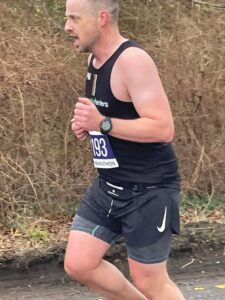 2 seconds can be a long time.

Full Results from Berko Half Marathon