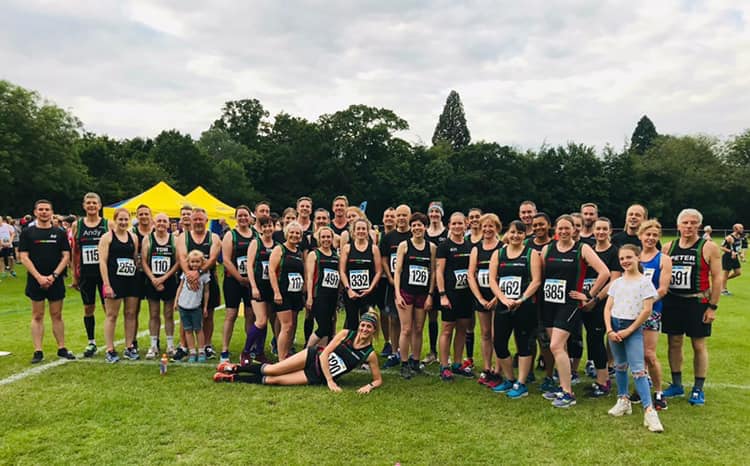 A fab turnout from GVH at the St Albans Summer Solstice 10k on 21 Jun, which was the GVH club league race for June.  Runners were rewarded with an excellent medal and a BBQ after their 10k performances.

St Albans has been the focal point of the longest day of the year for the last few years as it holds its annual Summer Solstice 10k and on Friday Harriers went in huge numbers to beat the sunset on a route which largely follows the Alban Way – a disused railway line that goes from the ancient city’s suburbs towards Hatfield.

Anthony James kept his fine recent form on track, after the previous weekend’s half marathon win, by being first club athlete to cross the line – and sixth overall – steaming round in 37:04, followed three places later by Al Flowers (37:52) who finished just ahead of Jon Roberts (37:58) to make it three Harriers in the top ten.

Angeline Cottrill (54:55) ran despite picking up a chest infection in the days leading up to the race, and finished ahead of Joanna Kidd (55:54), David Wilson (56:40) and Helen Terry (56:44). Leona Flaherty (Teresa Maryland) (57:23) was another club athlete racing for the second time in three days and was the penultimate member to cross the line in under an hour, ahead of Thomas Colligan (59:42), with Paula Cook (1:00:00) just missing out.